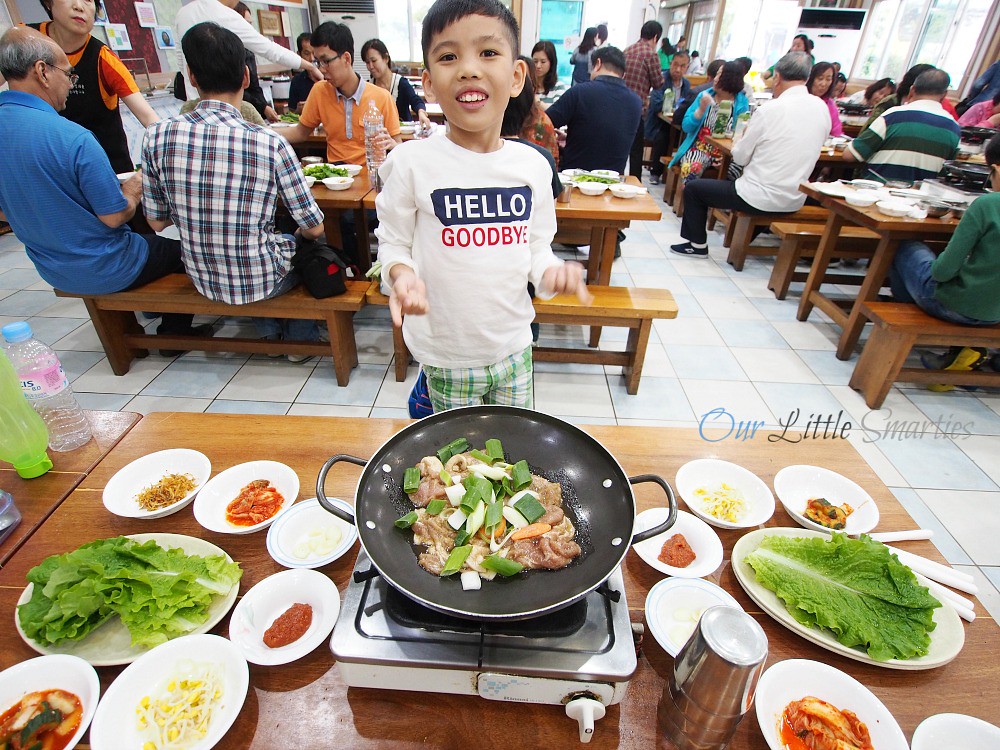 After indulging in a dose of cuteness, we went for lunch. Lunch of the day was black pork BBQ – meat of the Jeju black pig, which is one of the famous food here. Just like your usual Korean BBQ, you can choose to eat it wrapped in a lettuce.

Tender with a firm bite, and although it was grilled without any marination, the meat was delicious on its own. I’m not a pork lover, but I find that black pork tastes better than regular pork. The Jeju black pork is said to be very nutritious too.

After lunch, we made a brief stop at Jeju Orange Chocolate Factory. It was a Sunday, so the factory was not operating. We were given an introduction of the chocolate manufacturing process. Jeju is famous for its tangerine – they are big and super sweet. White chocolate coated on thin slices of tangerine tastes really fantastic. The chocolate costs 10,000 won per box (~SGD12) of 10pcs – not cheap though. 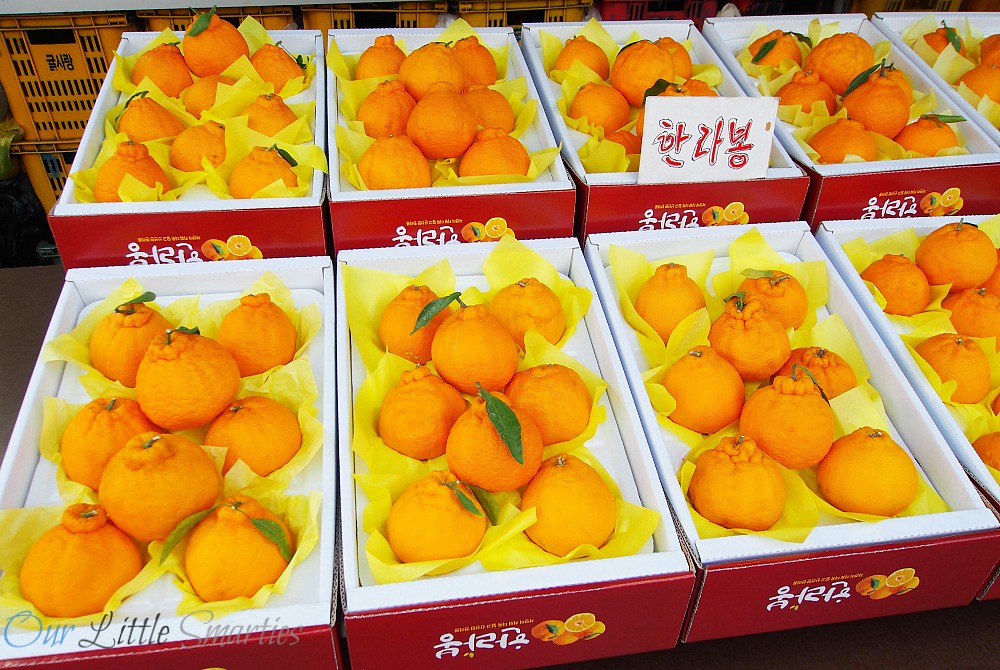 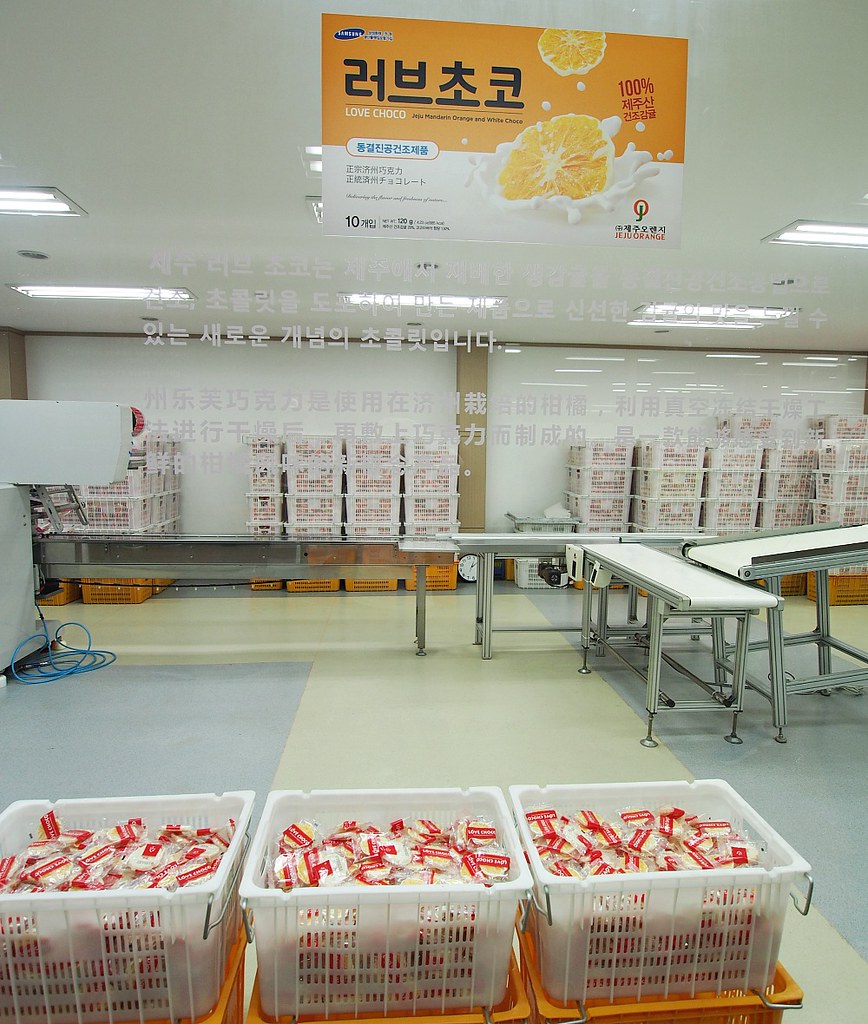 Next, we went to Seongeup Folk Village. Located at the foot of Halla Mountain (the highest mountain in South Korea), it’s a small town that holds a vast amount of culture such as the abundance of black lava rocks scattered on the ground and even used in their houses, the abundant display of stone grandfather statues called harubangs, the distinctive conventional “restrooms” and the local black-haired pigs. 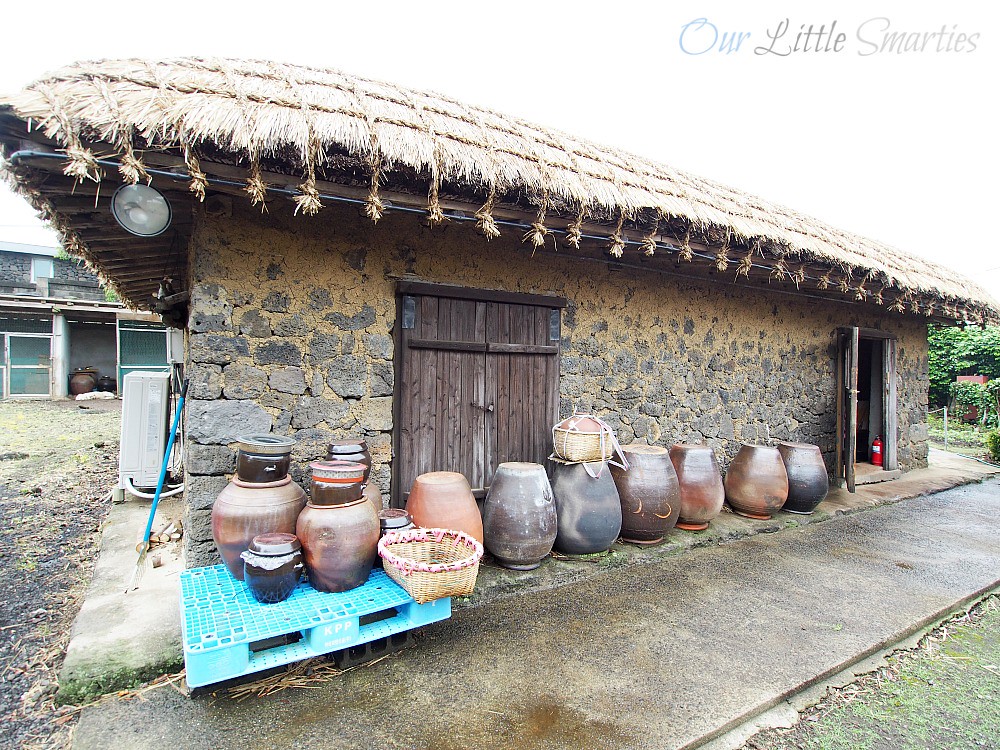 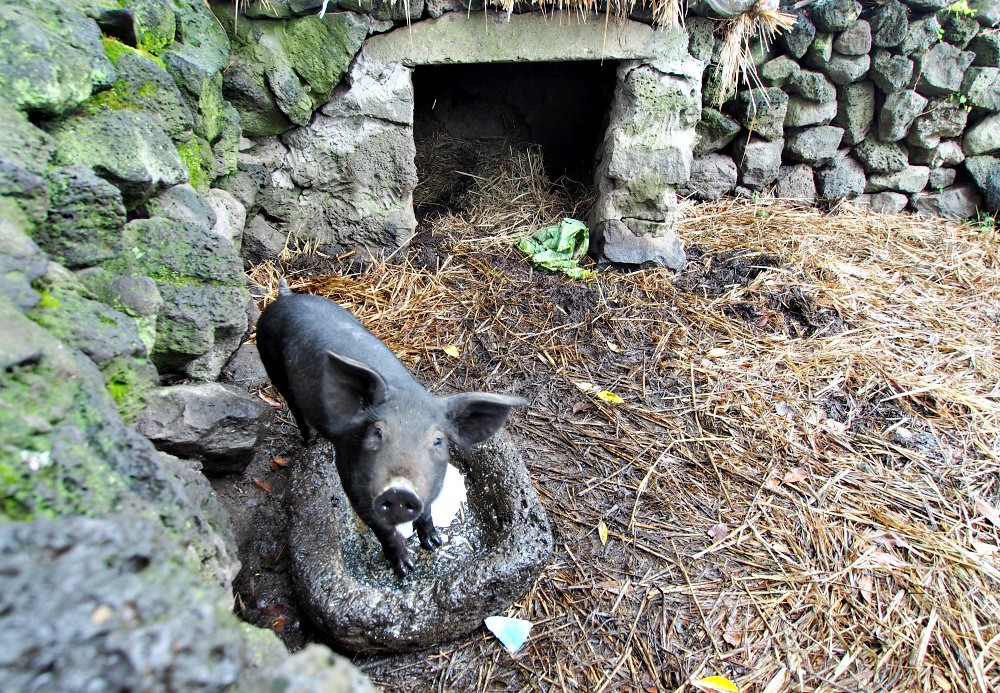 Yup, that’s the kind of black pig that we had for lunch just now. Haha! Luckily, I saw it after I ate, else I would have lost my appetite. Lol.

For those of you who have watched Dae Jang Geum, numerous scenes from the famous drama were shot here. 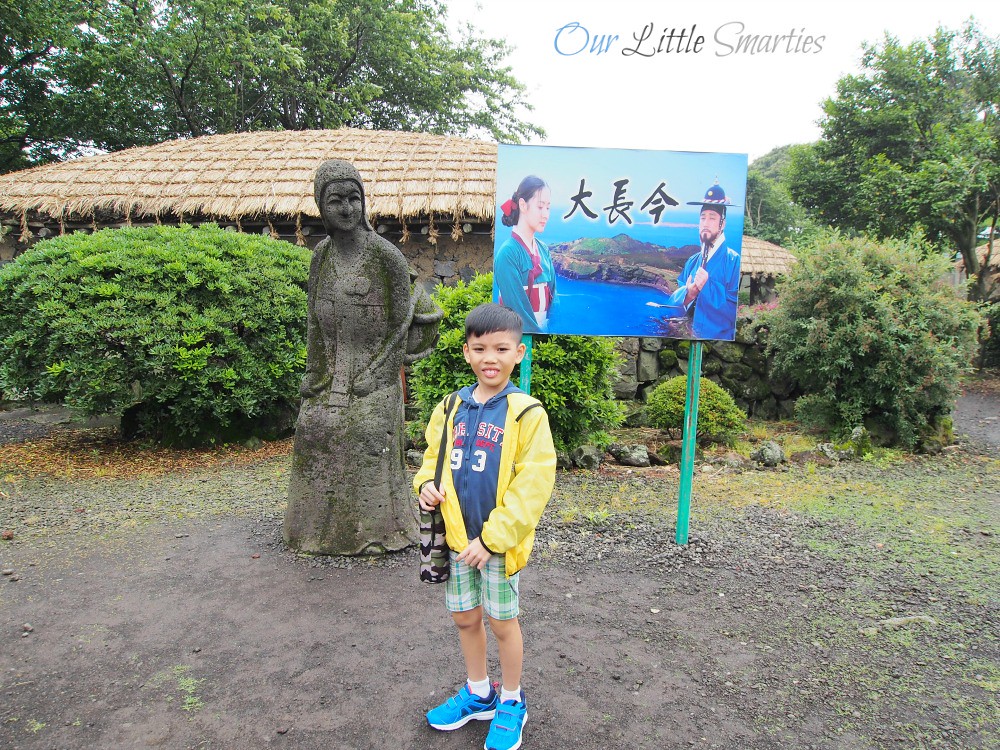 Our next destination was Seongsan Sunrise Peak. Seongsan Ilchulbong (name in Korean) rose from under the sea in a volcanic eruption over 100,000 years ago. There is a huge crater at the top of the peak. The crater is about 600m in diameter and 90m high. With the 99 sharp rocks surrounding the crater, it looks like a gigantic crown. The sunrise from the crater is said to be magnificent. 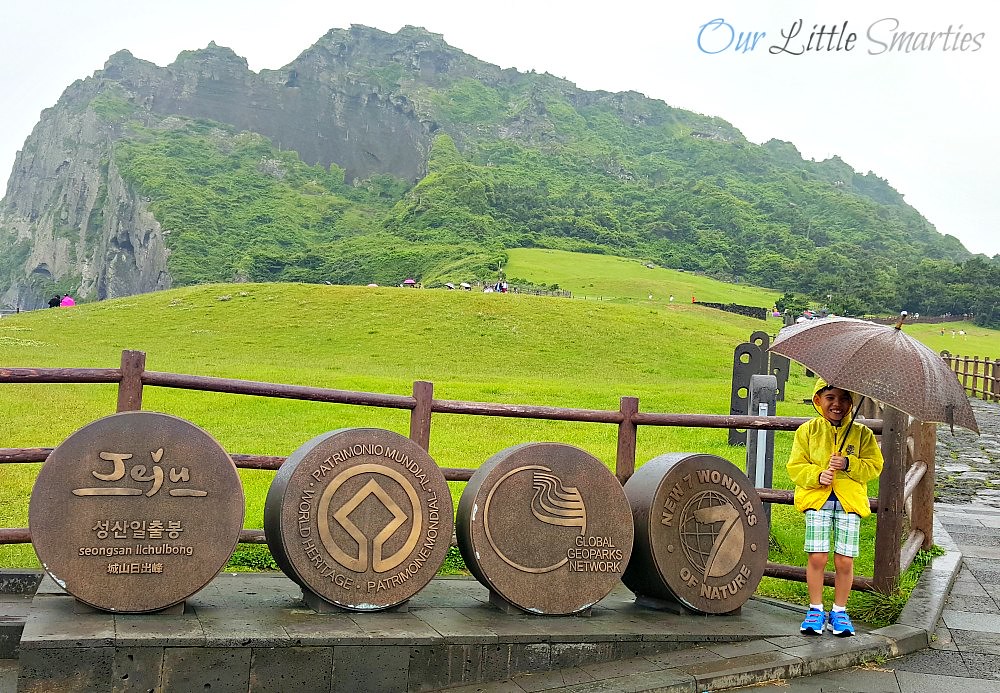 While the southeast and north sides are cliffs, the northwest side is a verdant grassy hill that is connected to the Seongsan Village. The ridge provides an ideal spot for walks and for horse riding as well.

Hiking up Seongsan Ilchulbong was surprisingly quite manageable. The hiking trails were easy to follow, coupled with nice and cool windy weather. Our tour guide told us that it takes ~20 minutes to walk up to the peak without stopping for rest. Unfortunately, we didn’t get to the peak because it was drizzling. 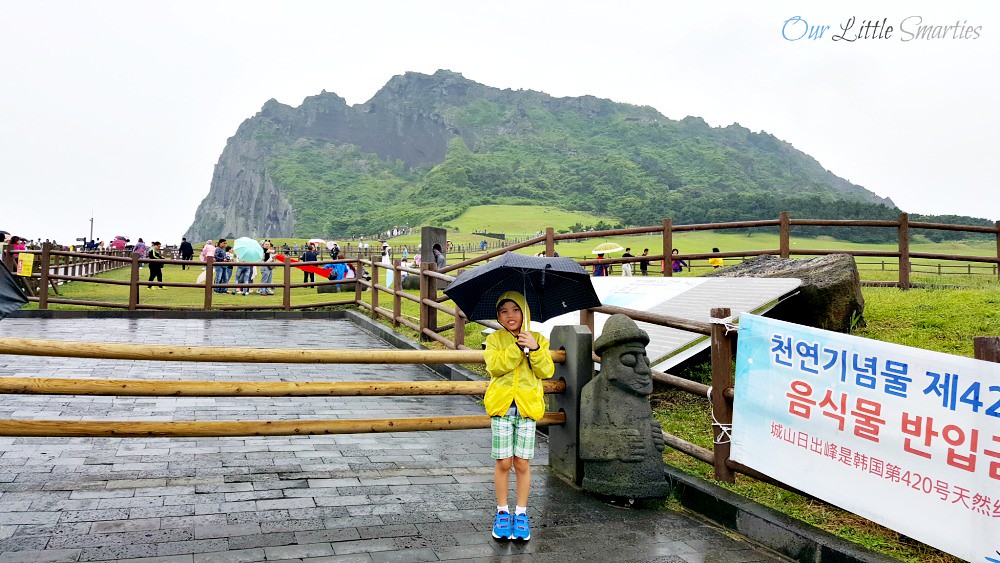 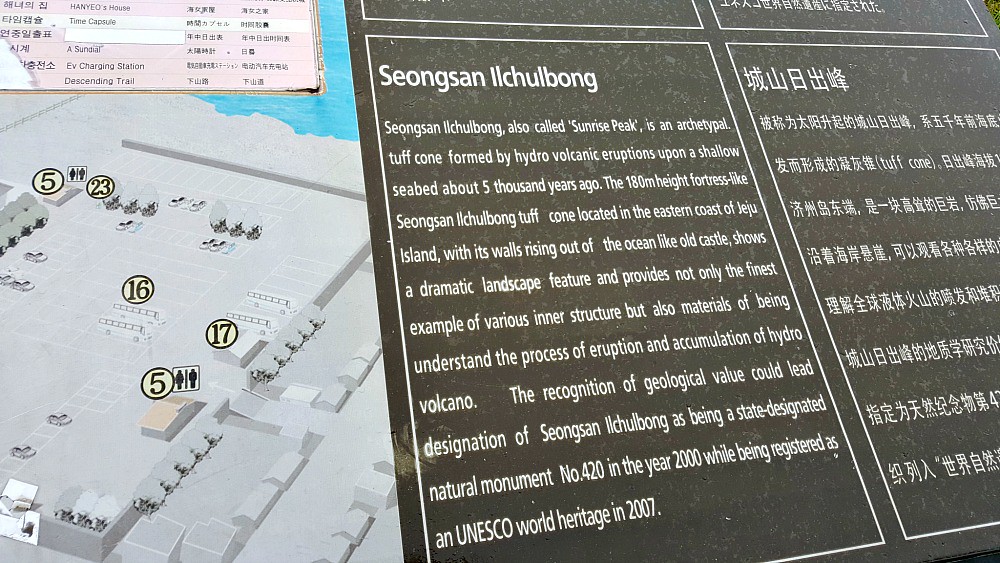 Definitely a place worth visiting and it’s popular among tourists too. Selected by UNESCO as a World Heritage Site, this place will enchant you with the magnificent view sculpted by Mother Nature. You can find several cosmetics brands like Innisfree and Nature Republic nearby. There is also Lotteria, a burger chain and Dunkin Donuts with Starbucks.

Our last destination was Dragon Head Rock. As its name suggests, the rocks here look like a dragon’s head, created by strong winds and waves over thousands of years. 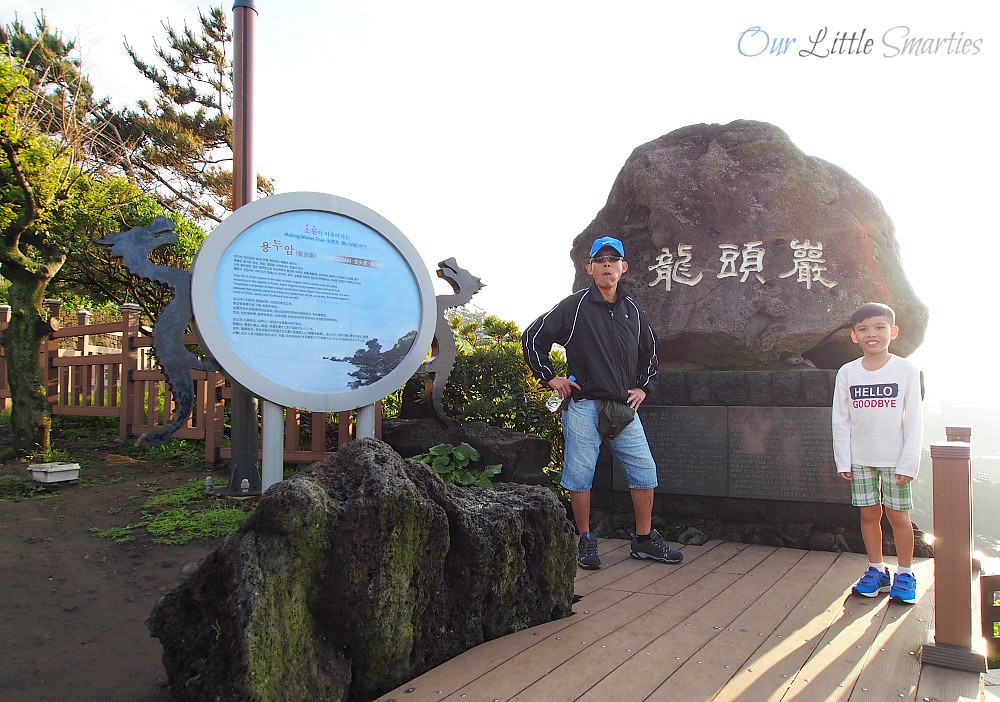 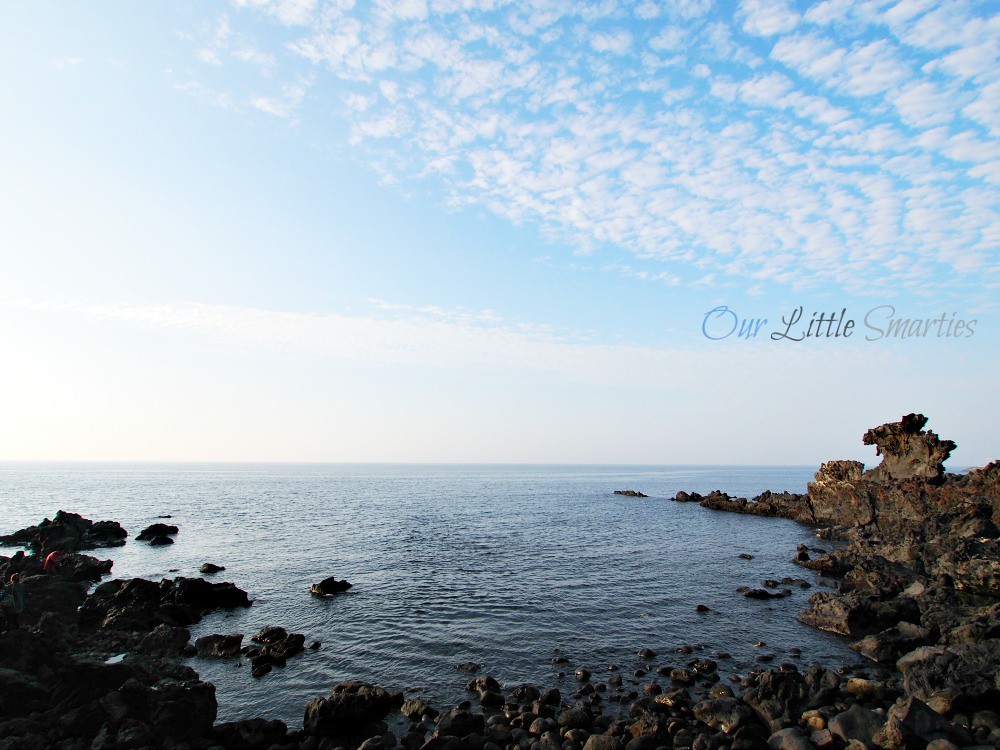 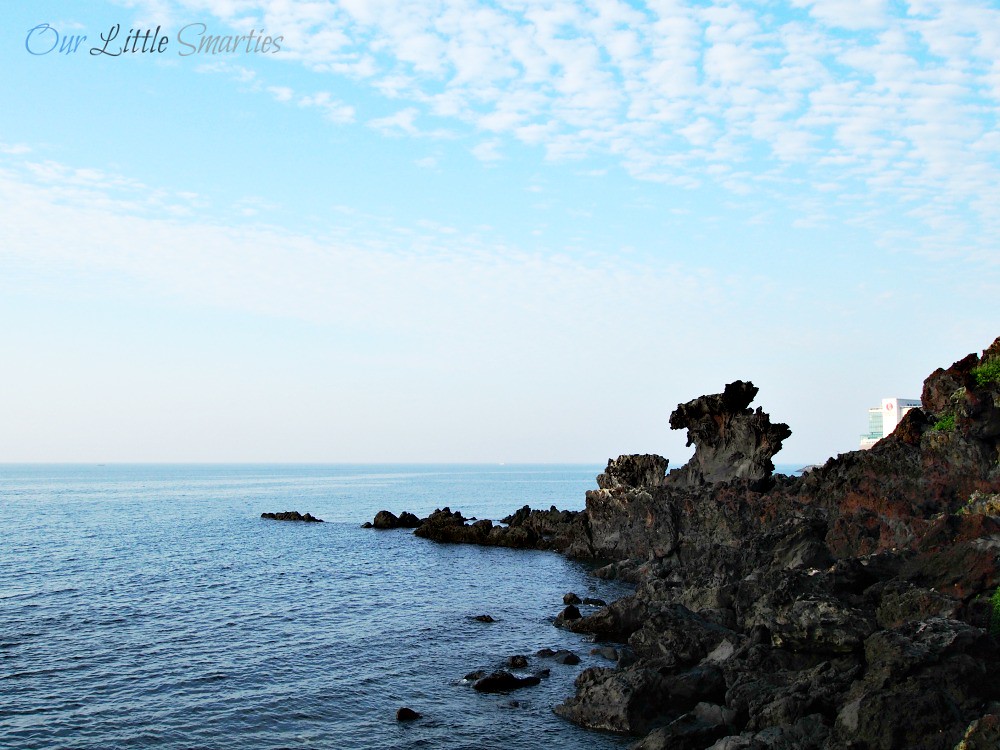 Dinner was one of the BEST in our entire tour. We had seafood steamboat. There was an optional upgrade of 35,000 won per person for sashimi with abalone. Everyone in our group opted for the upgrade, which was absolutely delicious. 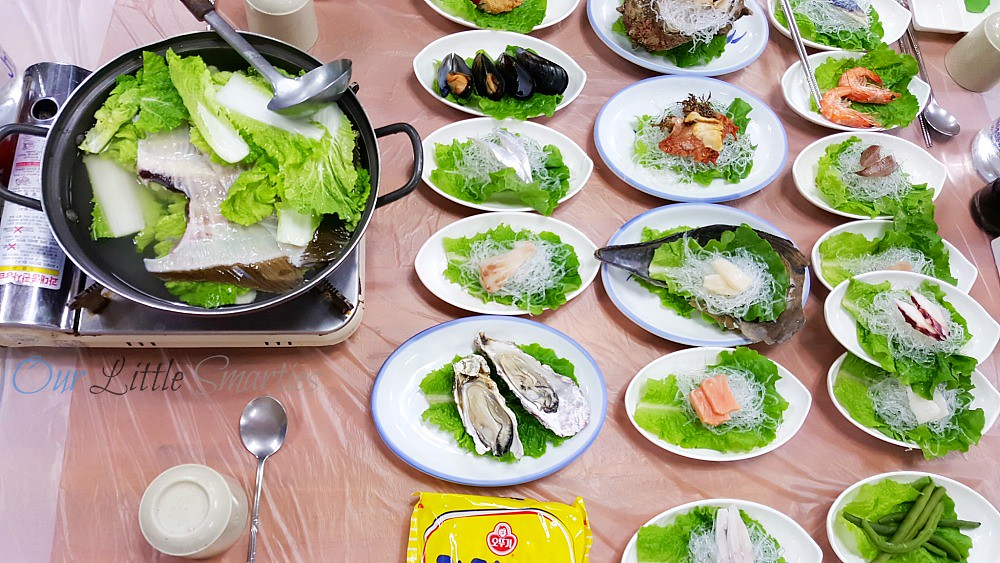 The meal started with yummy abalone porridge. We get to savor live seafood sashimi, abalone, sea cucumber, oysters, prawns, fish, and lots of side dishes such as egg roll. It was my first time seeing a live abalone. We’ve no guts to eat them alive, so we put them into our steamboat pot.

V also tried eating a live octopus. It totally freaked me out. The lady restaurant owner took a live octopus for all of us to try. She cut them into small pieces and served with its arms still squirming. Yikes! And V said it was such an intriguing experience for him.

After dinner, we took a stroll before heading back to Jeju Oriental Hotel.