When we found out that there is no final examination for Primary 1 during the Parent Orientation Day, we were jumping with joy.

“There will be no exam stress for us and our boy this year. Even if he doesn’t study, he will still be promoted to Primary 2 without any streaming. Yay!” I told the Hubby jokingly.

And that’s how we eased through the first term of his Primary 1. Not that he doesn’t study at all, but we didn’t attempt to test him or give him too many assessments at home. My plan for Term 1 remains the same – to get him to settle into the new school routine, one step at a time without overwhelming him.

Coming to Term 2 now, I start to feel a tinge of stress when various assessments start at school. For English, they have Show and Tell, Read Aloud Test and Listening & Phonics Test. For Maths, they have two Mini Tests, and for Chinese, they have Oral Test and so on.

All these mini tests and assessments carry 5 – 15% each from their final score. So the ‘kiasu-ness’ in me keeps reminding me to prepare him adequately for all these tests. After all, we don’t want him to end up padding the bottom ranks.

The first one was Maths Mini Test on shapes and patterns. Just when V thought that it is easy peasy, I mapped out a series of worksheets on shapes and patterns for him. For days, I went through the shapes with him, and make sure that he knows how to spell all the words (square, circle, triangle, rectangle), and identify patterns.

It may sound easy, but some of the questions are really quite tricky. These are three questions that I picked from his one of his assessment books: 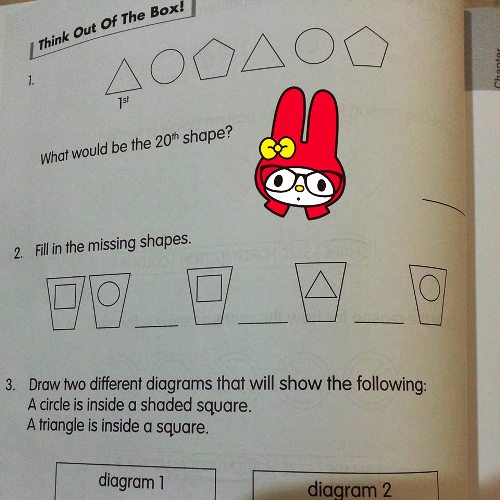 I was stuck at the first question and had a hard time explaining to him how to identify the 20th shape without drawing the pattern all the way to 20.

For the 2nd question, it is a little tricky but still doable after he spent some time to analyze it.

For the 3rd question, it’s challenging to get him to read all the sentences, understand them and draw the diagrams correctly.

Fortunately, the actual mini test didn’t turn up to be that difficult. But it wasn’t very straight-forward either. For instance, he got a mistake in this question where he obviously didn’t count the diamonds as squares. That’s why he got it wrong. 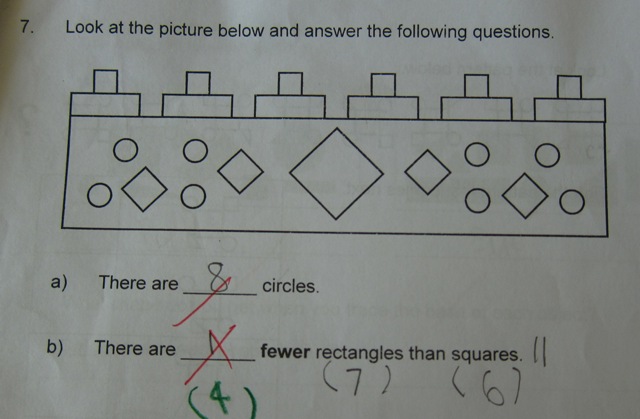 And I explained to him that diamonds are squares because they have four equal length sides and four corners. So, in mathematical term, a diamond is the same as a square.

On the other hand, I find that this question is quite difficult and I was amazed that he can get it correct. I questioned him on how he gets the answer – just to make sure it wasn’t his wild guess. He told me that he didn’t understand the first sentence, but he got the clue from the second sentence where he counted the number of circles.

Obviously, this question about pattern is quite tricky too. 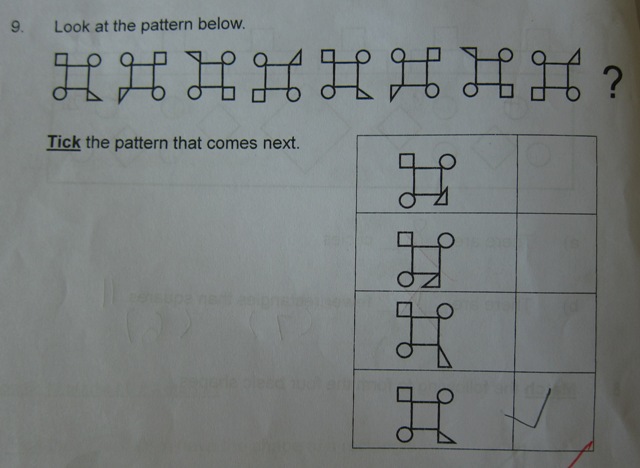 Interestingly, he scored 18/20 for his first Maths mini test and we were all so happy for him.

The Chinese Oral Test on HanYuPinYin came on the following week. Every night, we read his Chinese textbook to make sure that he knows how to pronounce the HanYuPinYin correctly. His reading is okay, except that he occasionally mixed up the “iu” and “ui”, and “ie” and “ei”.

As soon as the Chinese Oral Test was over, he had his English Read Aloud Test this week. Again, we spent a few days reading his vocabulary lists to prepare him for the test.

In a week or two, he’s going to have Show and Tell for English. I have no idea how and what to go through with him.

“Aiyah, he is going to have these assessments almost every week. Just relax lah! Stop stressing him and me!” the frustrated Hubby said.

I blamed the Singapore’s pressure-cooker education system for all these stress. I know I can’t be overly concerned with performance and grades, but if our boy didn’t do well, I would blame myself for not preparing him well enough for the tests.

Truth be told, when we first became parents, the Hubby and I agreed that we were not going to send our son for tuition every day for every subject. As long as he enjoyed the learning process and absorbed information from the world around him, that would be sufficient for us.

But seven years on, I find it hard to balance between leaving him to learn at his own pace, and stepping in to make sure that he’s on track and not lacking behind in school works. Sigh, it’s harder than I thought.

Sometimes, I think that it may be easier to have just one or two end-of-semester examinations, rather than having assessments or mini tests almost every week. At least we can still enjoy from the beginning to mid-term, and then start to go full speed as we’re approaching the final term.

Now, it dawns on me that having no final exam doesn’t mean no stress at all. Whenever I read a Whatsapp message that goes “we’re going to have mini test next week”, I’ll go scrambling through his textbooks and folders again to map out a revision schedule for him.

I should learn to be more relaxed.

I have some brand new items for sale. Milk powder, diapers and bento tools. Check out my For Sale page if you’re interested. Thank you!

Checking Out: The Adventure Zone in Penang

Hi Emily, I chanced upon this post of yours and I have the same thoughts like you! I’d rather they have just one or two exams instead of all these so called bite-sized informal assessments that are ongoing throughout the terms. It gives parents more stress to have to prepare our kids for these mini assessments. Well, that’s the SG education system… All the best to us! 🙂

Hi Ing,
Thanks for your comment. I’m happy to know someone who shares the same sentiments as me. Haha!

It’s a pain, really. Every week I need to prepare him for various kind of assessment / mini tests. Next week he has Chinese Oral Test coming up, haven’t even started on that.

If there is one week without any assessment or test, I can go out for celebration! 🙂

LOL! I totally know what you mean! Whenever my kids come back with an announcement of an upcoming test, my first words are usually: “Again?!”

Yes,
I can struggle lot when i tech with my son for an exam. He didn’t sit for study, once exam was announced i have attack headache.

Hi Priya,
I can imagine the stress next year when my boy starts to have final exam. Urghhh…

May I ask where Edison did his nursery and kindergarten? Seems that his foundation is quite strong 🙂 My boy is turning two soon and I’m looking for good nurseries…Thanks in advance!

Hi Divya,
Sorry for my late reply. My son spent four years of his preschool education at PLMC Kindergarten. It’s a church kindergarten.