Most of the time after I came back from a holiday, I’ll be too busy and too lazy to blog about the trip. If you’re doing an office job, you sure know how it feels after taking a long break. Works piled up, mailbox is full, and you need at least a week to get back on track.

By then, you heaved a sigh of relief and started to rest and recharge – yes, holiday can be really tiring. When the third week came, some of the details of the trip were lost in the memory and you have difficulty putting them into words.

This cycle seems to happen to me very often.

But I know that I’ll regret in future if I don’t pen down this trip before it’s completely forgotten. So, here I go …

This was the first time we travelled in a group tour with Little Edison. So, I was a bit anxious because group tour is usually very rush and the schedule is packed. V likes to take him own sweet time to take pictures, and on the other hand, Edison also takes his own sweet time to eat. I can imagine myself screaming at them to hurry up.

Luckily, it all turned out well. The boy didn’t fuss over long bus ride, he ate whatever we ate, he followed instructions, no toilet emergencies, and he can actually sleep well on the plane. The 7 hours flight just passed by in a blink of an eye for him.

He is a fantastic traveller, isn’t he?

We flew to Tokyo on SQ 638, arriving at 6:30am. As we won’t get to check-in to our hotel until evening, we brushed our teeth and freshen-up on the plane just before we land.

Our first destination was Senso-ji Temple (also known as Asakusa Kannon Temple). It is one of Tokyo’s most colourful and popular temples. Completed in year 645, this is Tokyo’s oldest temple with a history of more than 1,300 year. 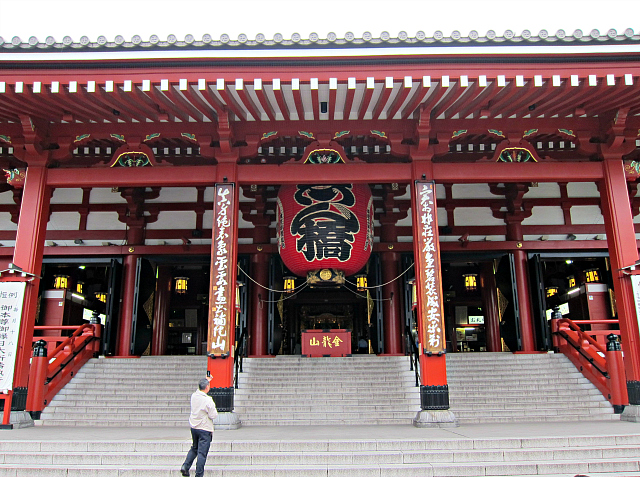 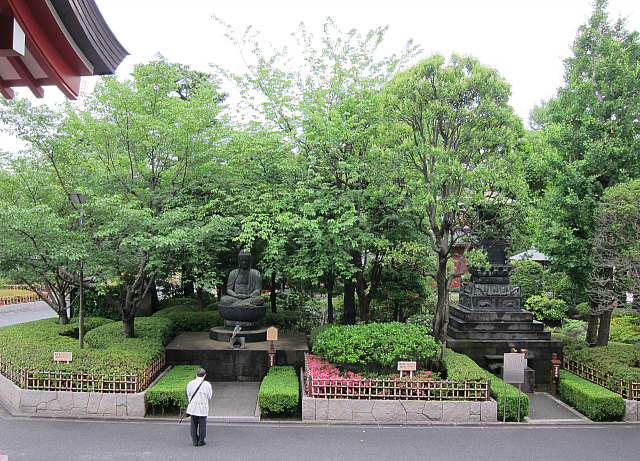 There is a shopping street of over 200 meters called Nakamise outside the temple. Alongside typical Japanese souvenirs such as yukata and folding fans, various traditional local snacks from the Asakusa area are also sold here. This shopping street also has a history of several centuries. 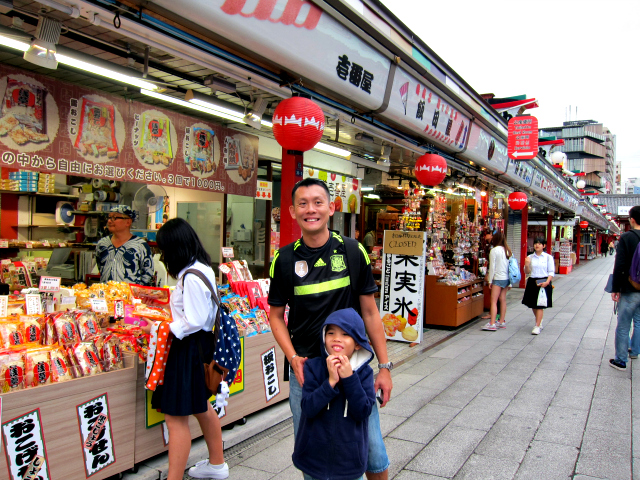 Next stop was the Metropolitan Government Building. It has observation decks at the 45th level which provide good panoramic views of Tokyo and beyond. 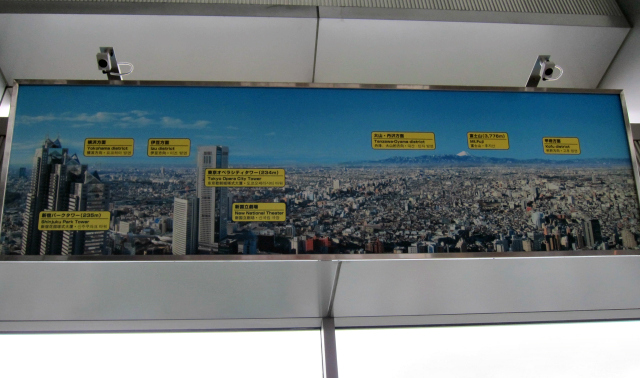 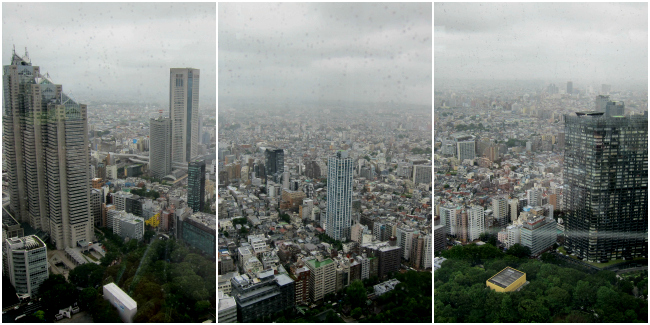 With favourable weather conditions, famous landmarks such as Mount Fuji, the Tokyo Skytree, Tokyo Tower, Meiji Shrine and the Tokyo Dome can be seen from the observatories. But unfortunately, it was a rainy day – thus we didn’t catch a very good view of the city.

Our third stop was something that I really look forward – The Sanrio Puroland! It was a kingdom of cuteness for me, but to V, he was more than pleased to find a shelter under the rain.

It was raining the whole day, sad to say, making our trip so inconvenient. Although it wasn’t heavy rain, but moving around with umbrella wasn’t very pleasant either. And I didn’t manage to take pictures from the outside of the building due to the rain. *tsk* 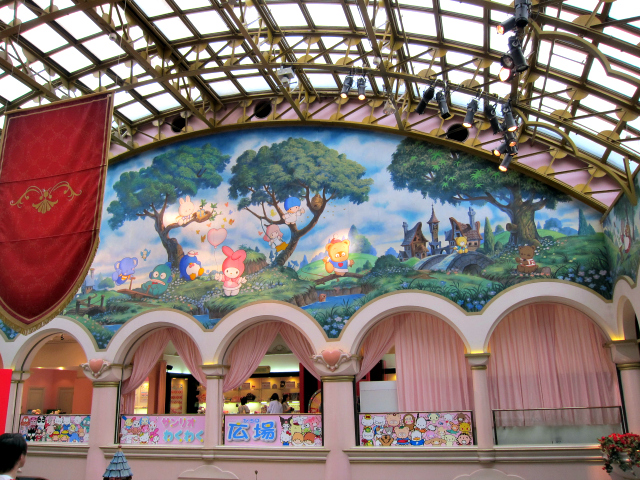 Sanrio Puroland is an indoor theme park – run by the Sanrio company. It hosts various musicals, restaurants, attractions, and theme rides using popular characters such as Hello Kitty, My Melody, Cinnamoroll, Jewelpet and many more. It has the biggest and most extensive gift shop selling Sanrio character merchandises. 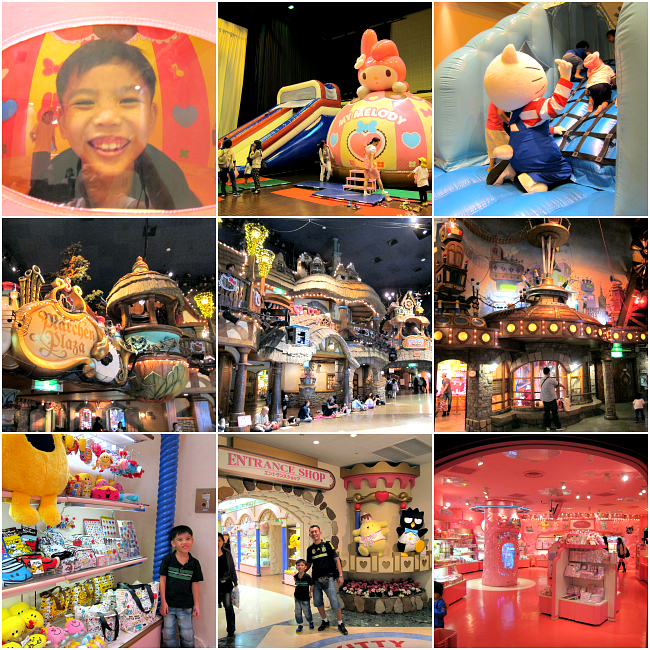 Can you spot the Hello Kitty character playing with the children at the inflatable playground?

The theme park is not very big; you can spend half a day to get a good experience of it. We had our buffet lunch here. The food was just ordinary, but all the guests were delighted with Hello Kitty character meet-and-greet as well as performances. 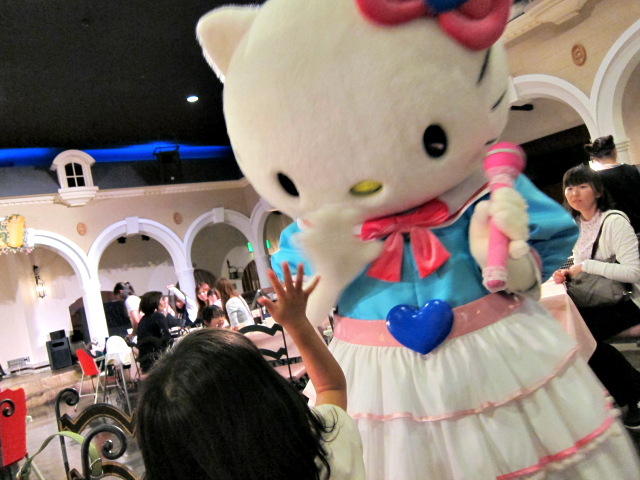 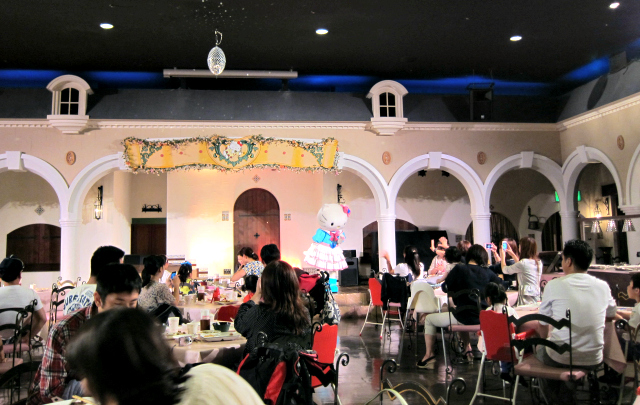 All I have to say is – a trip to this unique theme park is really a MUST for all Hello Kitty fans!

After a wholesome of cuteness, we embarked on a Tokyo Bay Cruise to Odaiba Park. Along the cruise (still raining), we saw the Fuji TV Station Tower, Rainbow Bridge, Tokyo Tower and the Statue of Liberty guarding the Tokyo Bay. 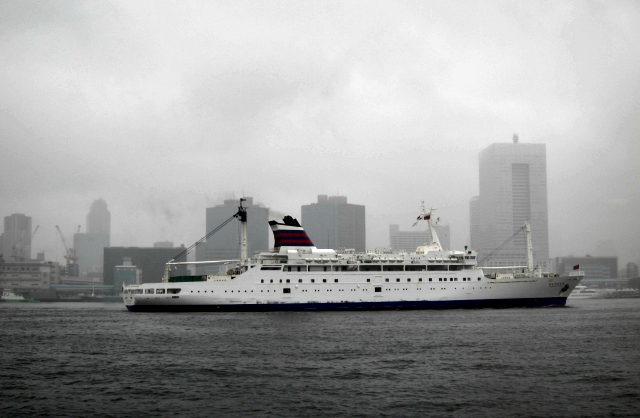 Odaiba is a popular shopping and entertainment district on a man-made island in Tokyo Bay. The Rainbow Bridge connects Odaiba to the rest of Tokyo. This two-storey bridge is an iconic symbol of the bay and is especially beautiful during its nightly illumination. The bridge supports an expressway, a regular road, the Yurikamome train line and pedestrian walkways along both sides. 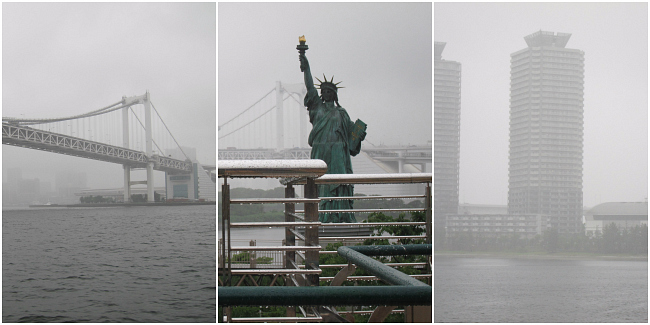 Our last stop, before our legs totally broke down, we had a quick shopping trip and dinner at DiverCity Tokyo Plaza before we check-in to our hotel.

All in all, it was a pretty long and packed day. The itinerary was great; we managed to catch some sleep on the bus and that really kept us going the whole day.