I can’t believe that Term 3 is coming to an end soon. “Time flies” is indeed an understatement in our times. Don’t you agree?

Much to my delight, Term 3 seems to be the shortest and easiest so far. Maybe we’ve accustomed to the primary school routine now. Sleep early, wake up early, learn, play and have fun. That’s how Term 3 turned out to be.

Prior to registering him in a boys’ school, I was most worried about school bullies. Thankfully, that didn’t happen. Instead he talks about making new friends and sometimes losing them, the joys of recess, the funny things that his friends do or say, how his teachers make the boys stay back for recess if they misbehave, etc.

He talks when he’s in the mood to do so. Otherwise when I ask too much, he goes “Mama, I think there are enough of questions now.”

Even though there is no end-of-semester exam in Primary One, there are various assessments and tests starting from Term 2. Spelling test is a weekly affair. We struggled so badly with Chinese spelling test in Term 1, but I’m glad that he’s most improved in this area now. 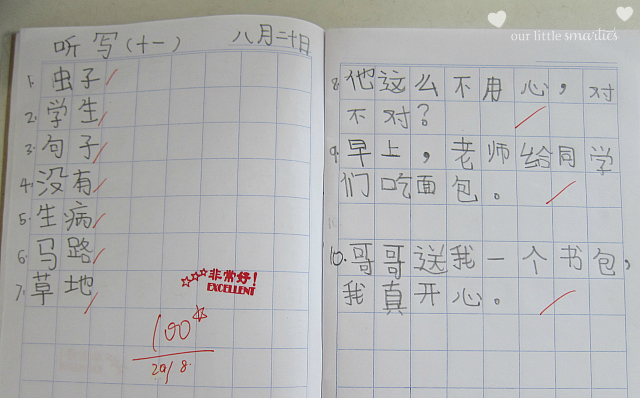 I pretty much leave it to him to practice on his own now. I will test him one day before the spelling test – just to make sure he didn’t miss it. I also pasted his test schedule on the wall so that I can check it regularly and do some revisions with him before any tests or assessments (if I know what are the topics to be tested). 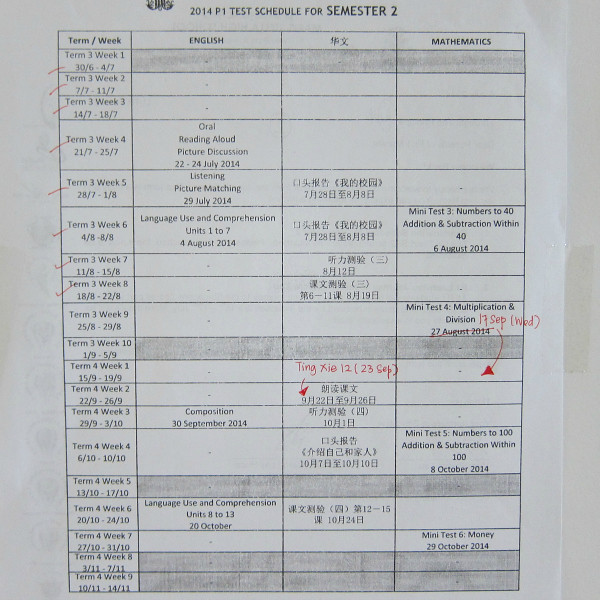 Until now, his school didn’t release information about the highest or lowest grades in each subject, as well as each boy’s standing in his class. So, I’ve no idea how he’s faring in school. Judging from his scores which usually fall within the range of 70 to 80, I think he’s doing pretty okay.

Looking at his test questions, I really don’t expect him to get full marks. Some questions are really too challenging for his level. And it doesn’t matter to me whether he scores 90 or 60. The learning at this stage is still very basic. What’s more important to me is that he learns from his mistakes and gradually improves himself from there on.

As he grows up, he also needs to learn other important skills like managing his time efficiently during test, check his answers and make sure he doesn’t miss out any questions, etc. He will slowly pick-up these skills by himself after going through several tests at school.

Our major challenge, however, is still the Chinese Language. The fact that he’s studying in a SAP school, it’s even tougher as he’s learning the Higher Chinese. This term, he had his first Chinese Show & Tell. That was a HUGE challenge for a boy who rarely speaks in Chinese at home.

The script is 8 sentences long and the topic is about his school. I made him memorize one sentence each day, and he took 1.5 weeks to memorize the whole script. He came back with 29/36 for that Show & Tell, and I was completely amazed.

Since the beginning of the year, my decision has been made that I’m not going to send him for tuition classes after school. As much as possible, I want him to stay at home, rest, read at his own pace, more outdoor playtime, and have a carefree lower primary life.

But unfortunately, that didn’t happen. Thanks to all the distractions from TV and electronic games. We’re both at work, and my parents-in-law has been a little too lenient to him. So I finally succumbed to my tiger mom instincts and enrolled him for a Chinese tuition class after school on Wednesday.

I thought it’d be good to have a teacher to teach him Chinese after school, and expose him to more Mandarin-speaking environment. The class duration is 2 hours, and I ask my parents-in-law to send him there. I will pick-up him up when the lesson is over. 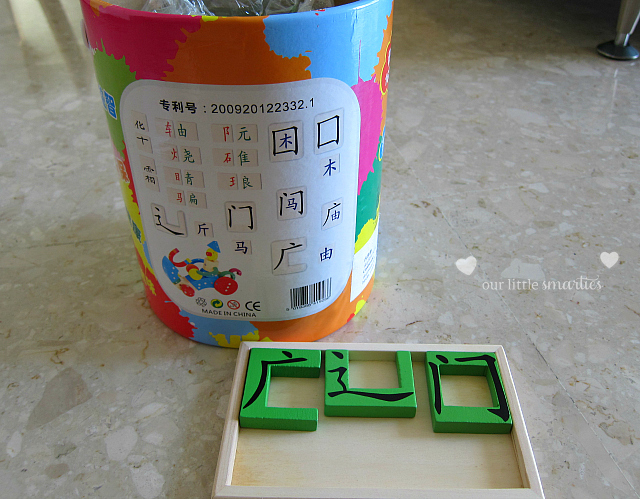 He just started the Chinese tuition two weeks ago, and so far so good. He’s adapting well and no complaint. I’m glad to ‘outsource’ the Chinese Language to a qualified teacher as I’ve difficulty teaching him the language myself. At home, we play some Chinese word games and read Chinese story books to develop his interest in learning the language.

I encourage him to take up a sport and start learning it since young. I gave him a choice, and he chose golf. So, he started his golf lessons three months ago. One hour every Saturday, and he totally enjoys it. 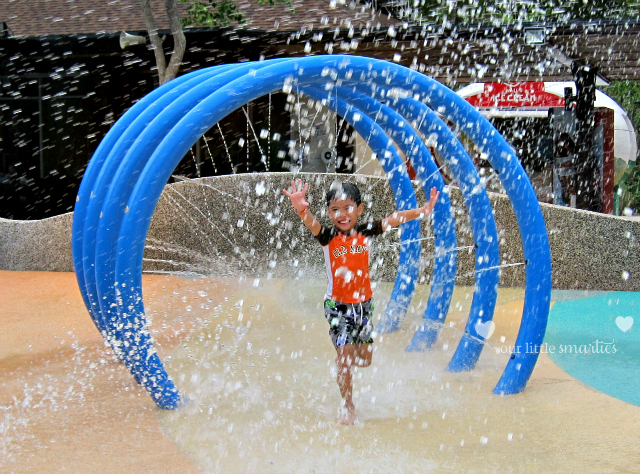 And Sunday will be all play day for him now.

I am also worried about my son’s Mandarin, so I finally decided to outsource it too, and he will start with speech and drama, so that he is more comfortable speaking it. This is after his Chinese teacher said his new Indian classmate spoke better Mandarin than him, and a Filipino mother told me the other children in his class were going for classes too. Not even in primary school yet!

Hi Sarah,
Speech and drama class is a very good option, especially for pre-schoolers. Wise choice, and I hope that your son will enjoy the class.

Heard that next year’s P1 syllabus will have more emphasis on Mother Tongue. Haiz, going to be even tougher now. All the best for both of us. Jia you!

My girl speaks English most of the time and refuses to read Chinese story books 🙁
Now she is going P1, need to teach her to speak and read more.
I am interested in the above card game. May I know where did you get it?
Thanks.

Hi Jane,
My son is just like your girl. It’s also my fault because we seldom speak in Chinese at home. I bought the Chinese block games during one of the roadshows in his kindy two years ago – I can’t remember the name of the dealer. Sorry about that.

No worries Emily…
Thanks for sharing in your blog 🙂

Hi Jane,
I finally recalled the name of the book store. It’s Big Tree (http://www.big-tree.com.sg/). They have a store at Toa Payoh.

Hi, May I know where did you buy the chinese character block toys? It looks interesting.

Hi Dawn,
I bought the set during one of the roadshows in my boy’s kindergarten. The name of book store is Big Tree (http://www.big-tree.com.sg/). They have a store at Toa Payoh.

Thank you very much !