Perhaps the best thing about Legoland Malaysia is its close proximity to Singapore. It’s easily doable as a day trip, but certainly more fun with an overnight stay at the Legoland Hotel.

During the last Sept term break, we went on a 3D2N trip to Legoland Malaysia. This was our third trip (I blogged about our first and second trip HERE and HERE), but we’re still as excited as ever.

Legoland is one of those theme parks where kids and adults of all ages will enjoy it. Among all the theme parks that I’ve been to, Legoland is the most vibrant and colourful. Nothing compares to its millions of bricks that will inspire everyone’s imagination and creativity to build.

If you’re thinking of driving to Legoland, just do it! It’s just a 20 minutes drive from Tuas checkpoint (second link). You can buy the Touch & Go card at the leftmost gantry if you don’t have one. A brand new card costs RM30 inclusive of RM10 deposit. Each trip costs RM7.50, so it’s sufficient for a return trip.

From Malaysia checkpoint, just proceed along the highway and exit at 312C (Nusajaya). From there, you’ll see signboards guiding you all the way to Legoland. You don’t even need to use a GPS.

Now, welcome to the world of LEGO bricks! 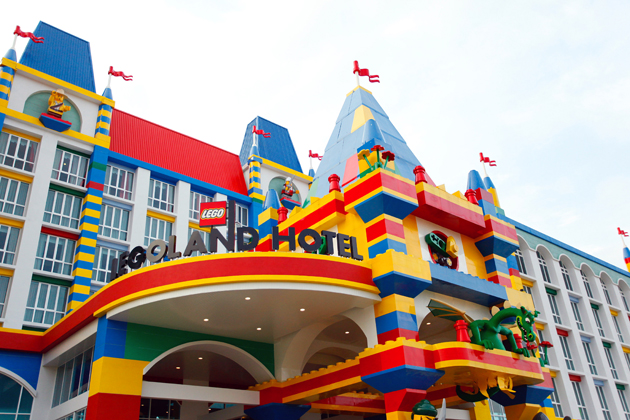 This time we stayed in a Premium Adventure Theme Room. The room has a king-sized bed for adults, plus a separate semi-private sleeping area for children – complete with a bunk bed, pull-out trundle bed, entertainment unit and LEGO toys. Little Edison was totally smitten with the bunk bed. 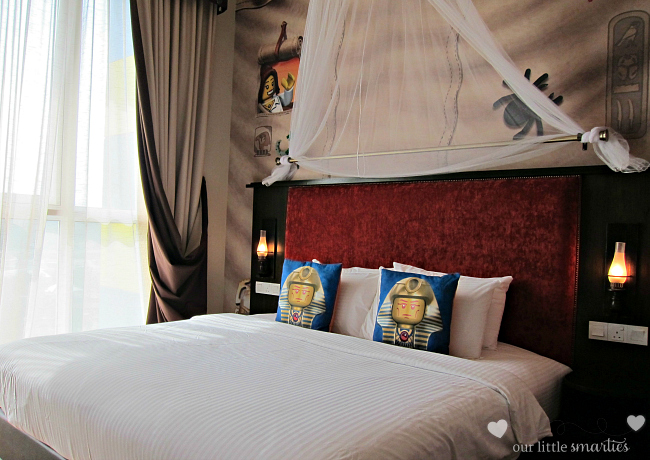 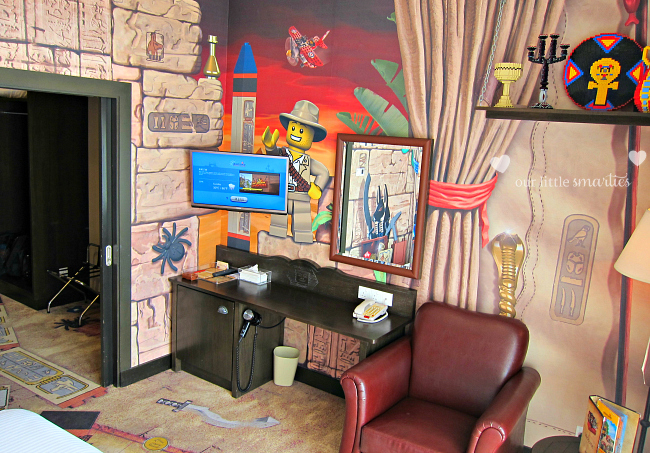 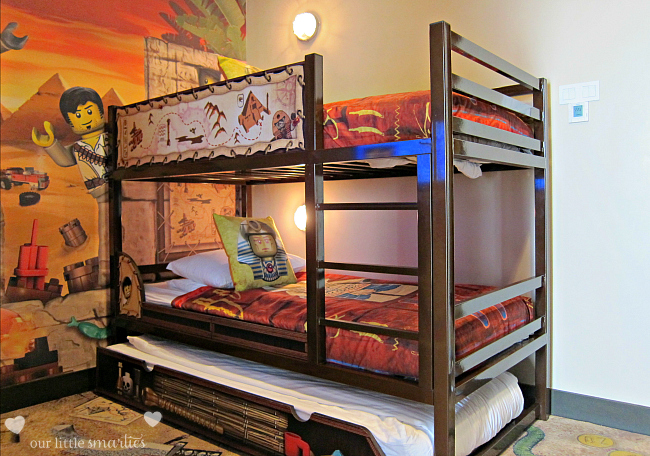 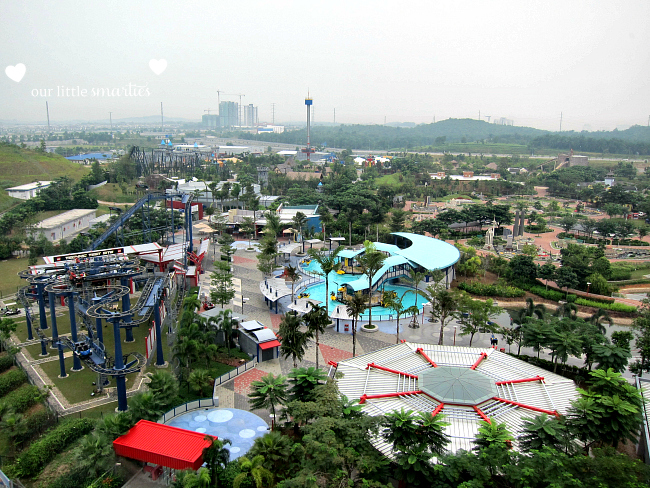 The full theme park view from our room 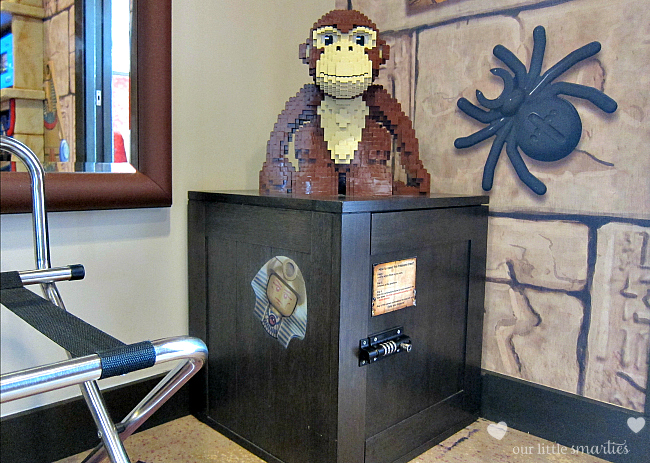 The highlight of the room is the Treasure Chest (with a brick built monkey sitting on top). Get your kids to solve some clues in the room and get the code to unlock the treasure chest. They’ll be rewarded with some LEGO goodies.

We took a dip at the swimming pool located on the 5th floor. There is an adult pool and children’s wadding pool. 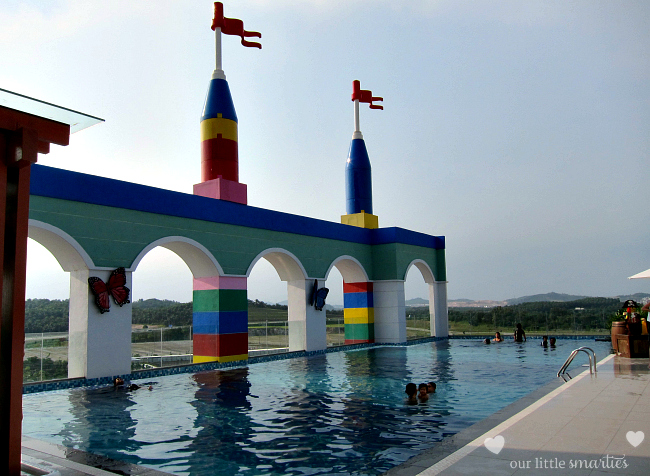 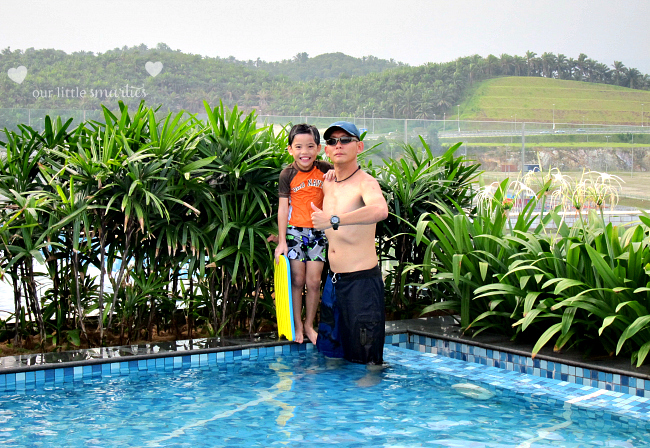 We thank Legoland for sponsoring our combo tickets so that we can enjoy the theme park and water park once again.

We started the day early. Woke up at 7:30am, went for breakfast at 8:30am, and by 10am, we were already waiting at the gate (theme park opens at 10am). We visited the theme park first. This was a good move for us, because by noon, the queues for rides became slightly longer.

The theme park is divided into seven themed areas of attractions – The Beginning, LEGO® Technic, LEGO Kingdoms, Imagination, LEGO City, Land of Adventure and MINILAND. And in each theme there are different rides and attractions. 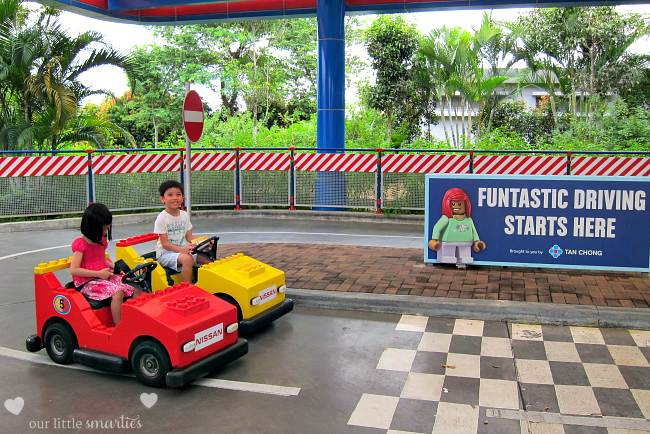 Edison’s favourite rides are the Driving School (at LEGO City), Dragon’s Apprentice (at LEGO Kingdoms) and Beetle Bounce (at Land of Adventure).

At Driving School, kids get to drive on their own – on these colourful LEGO toy cars. The Dragon’s Apprentice is the kid’s version of roller coaster which Edison enjoyed very much. I’m not very much into roller coaster, but I had to brave myself to ride it with him as he didn’t meet the height criteria to go all by himself. 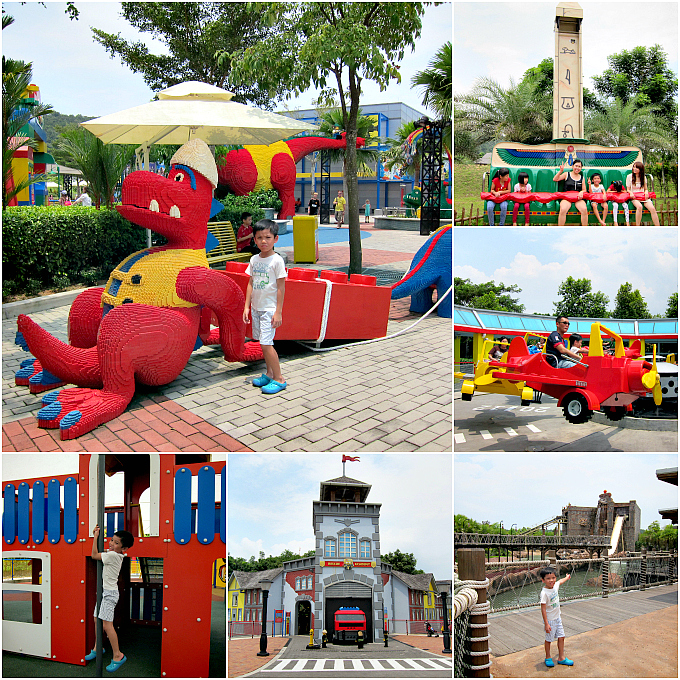 Beetle Bounce is really very fun, and I highly recommend it. Other rides that we went on include Remote Control Boat, LEGO City Airport, Lost Kingdom Adventure, and Observation Tower. 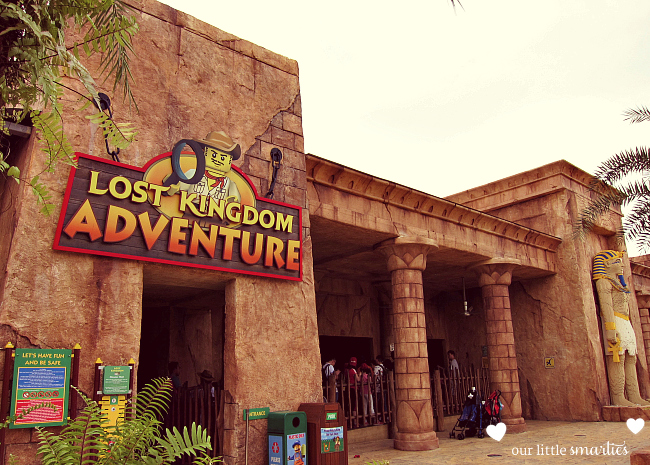 What’s new at Legoland now, you may ask. LEGO Star Wars Miniland Model Display has just been launched in conjunction with its upcoming second anniversary. 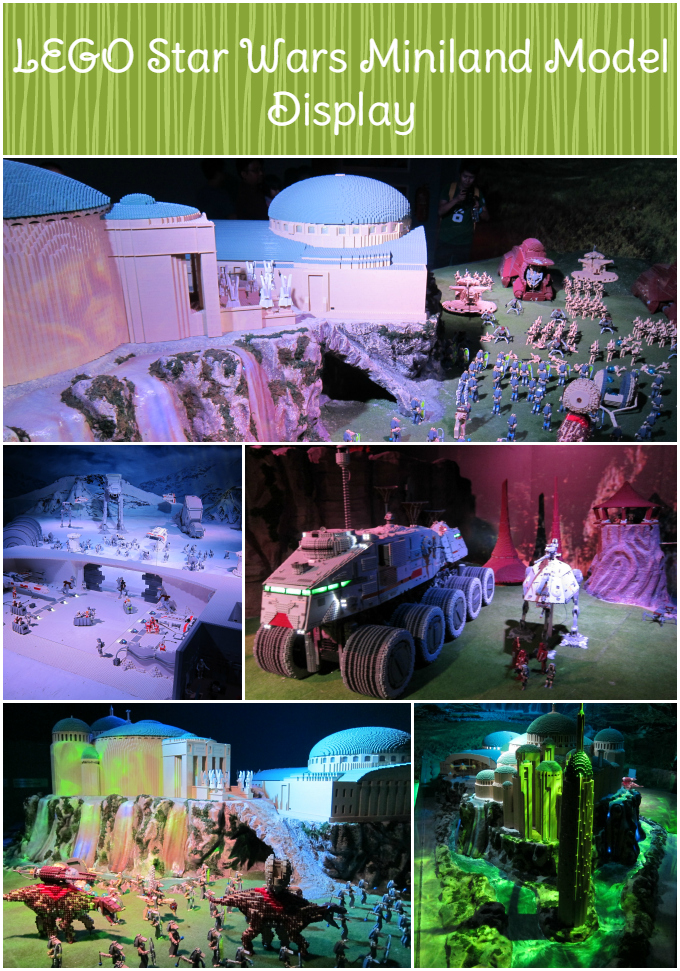 The attraction features seven scenes from the six Star Wars films and The Clone Wars animated series in great detail. In total, it features more than 2,000 LEGO models built to a 1:20 scale using 1.5 million LEGO bricks.

Being fully indoor and air-conditioned, we really enjoyed this new amazing model display – while taking a short break from the rides and hot sun.

We had a quick and rather late lunch at the Market Restaurant. Then, we head to our room for a change before we made our way to the water park. As you can see, the biggest advantage of staying at Legoland Hotel is that you save a lot of time commuting between these 3 places – which is why I highly recommend it. 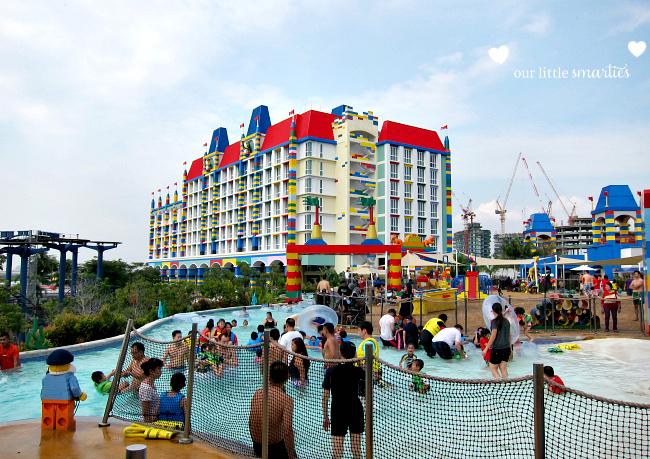 My favourite ride is the Brick Blaster. We had to grab a green raft (it’s quite heavy), walked up a flight of stairs and zoom down the slide together on the raft. It was really fun!

If you’re too lazy to carry the raft, try the Red Rush. It’s a family tube slide where up to four people can ride together down a 312-foot-long curving track on an 11-foot in diameter half pipe. It’s slightly more challenging than the latter. 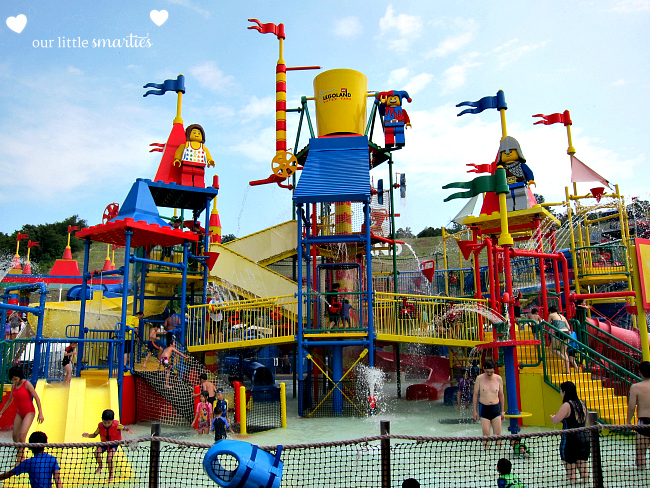 Pictured above is the Joker Soaker. It’s a fun and interactive playground with various lengths, heights and types of slides that offer something different for every member of the family. 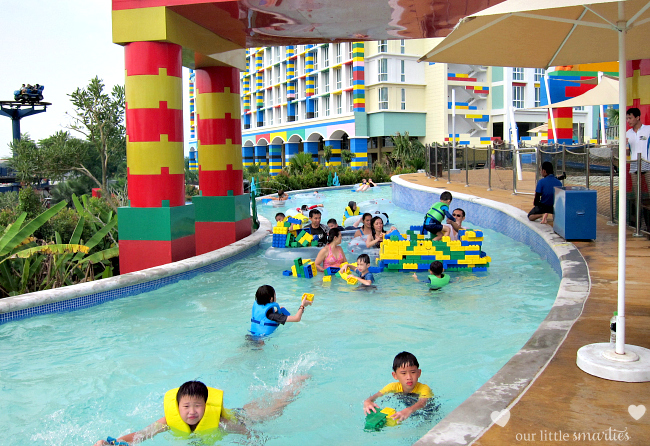 Towards the end of the day, we started to wrap up by slowing down our activities. We were floating away on a voyage around the lazy river. This is called a Build-A-Raft River where children can customize their own raft using soft LEGO bricks.

If you want a private shaded space for your family members to relax-in, you can rent a private cabana that features comfortable seating, complimentary towels and drinks, plus DUPLO bricks to play with. You have an option for half day or full day rental.

We spent close to eight hours at both parks. At the end of our expedition, we were at least ten shades darker. But for all the fun that we had, it was all worth it!

Overall, yes, it was a fantastic day! We’ve been talking about visiting Legoland again for months, and I’m glad that we made it.

My Blogging Journey with Nuffnang