Me, mother of one, 40-year-old-ahjumma, who has never been to a concert before… has attended a Korean star’s fan meeting event! I don’t mind being the oldest fan there, just because… it’s Park Bo Gum fan meeting in Singapore. And it’s his first in Singapore!

I didn’t tell V that I bought a Cat A ticket that costs $228. Else, I’ll get a whole night of nagging (don’t worry, he doesn’t read my blog). He simply couldn’t understand why his old wifey is still fangirling over Korean idols.

The tickets to the fan meeting event were sold out two months ago. On the first day of its sale, I had to fight an “online war” for half an hour to secure two Cat A tickets. The ticketing system crashed as fans thronged to the site to purchase their tickets. All 2,000 tickets were sold out within three hours of sale. Luckily, the organiser added another 1,500 seats and eventually, they were sold out too. Can you imagine his explosive popularity?

I Remember You (also known as Hello Monster) is the drama that transformed me into a Bogum fan. His portrayal of character “Min” – a psychopathic serial murderer with a complex personality – was especially outstanding. His split-second change of expression from smiling to creepy scary has forever inked in my mind. 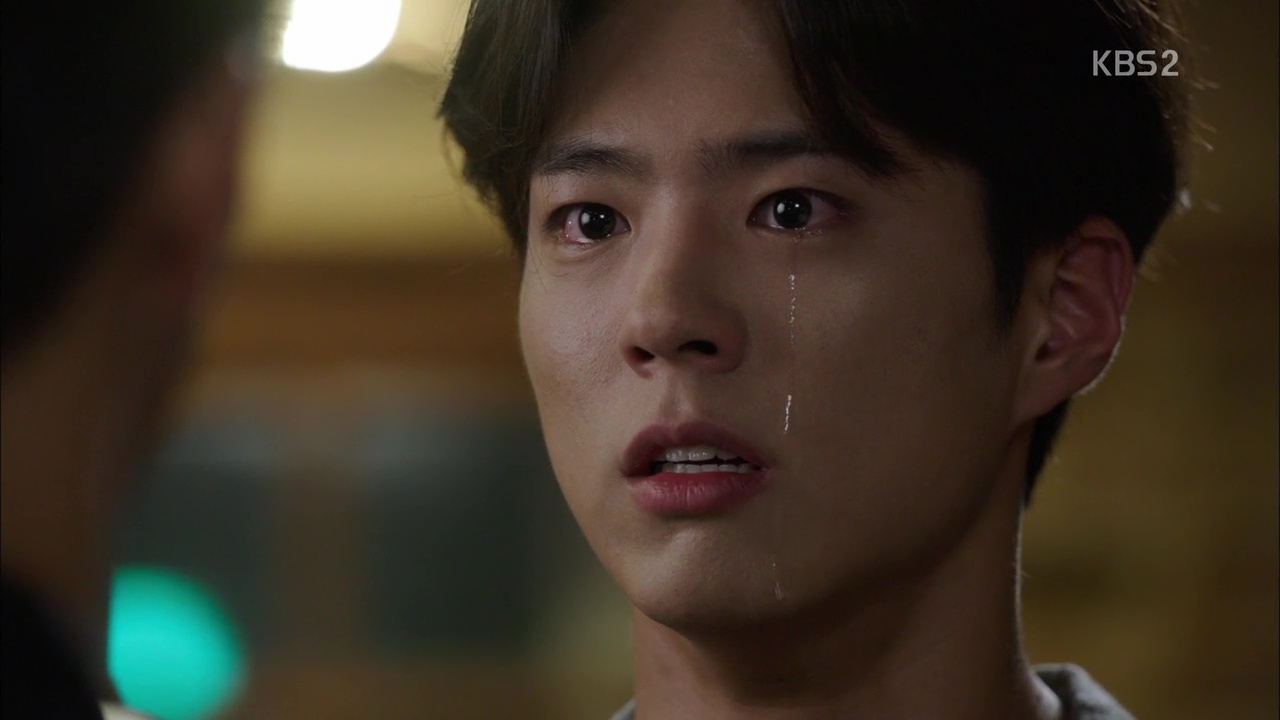 Next comes Reply 1988. If you watched this drama, you’ll know it’s impossible not to fall for the adorable Choi Taek, a genius baduk player who is mostly quiet but struggles with the simplest of daily tasks (he’s super hilarious too!). He totally captured my heart with his innocence and naivety.

This innocent look makes me wanna watch Reply 1988 over and over again!

From there on, I was a die-hard Bogum fan. Do I even need to mention the massively popular K-drama Love in the Moonlight?

Now, back to Park Bo-Gum’s first ever fan meeting in Singapore! 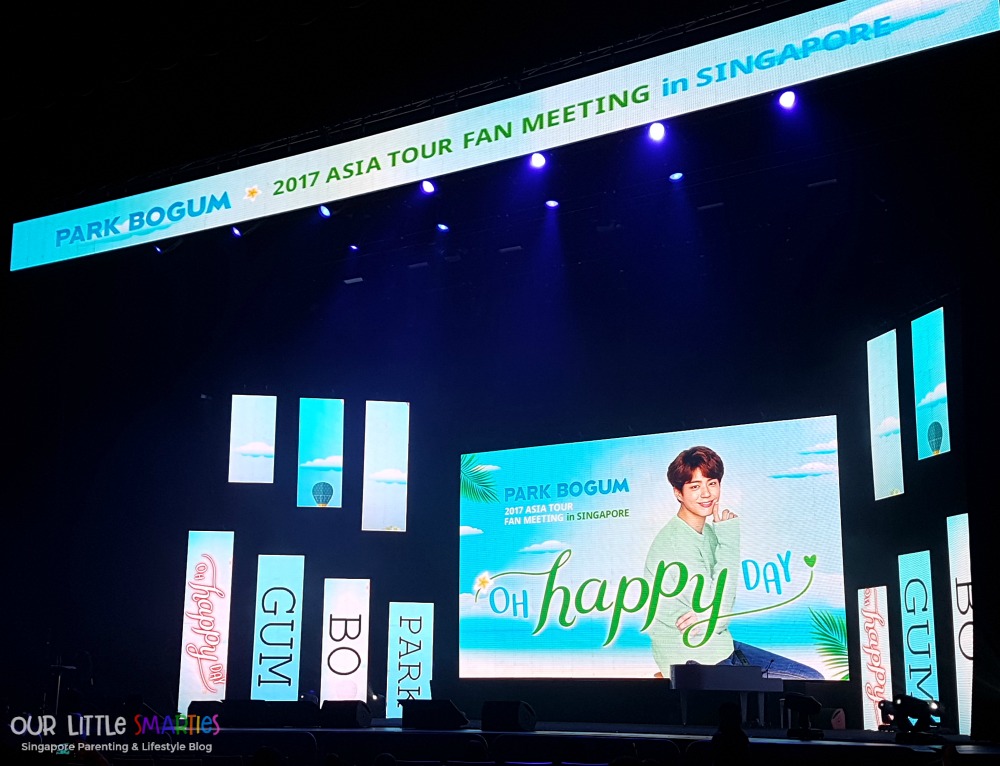 The event started at 6:15pm. The enormous crowd welcomed Bogum with a very loud cheer. Unknowingly, I was transformed into one of the 3,500+ screaming fans! I love that the event was well organised into several chapters, making it more engaging and fun too.

The fan meeting opened with the first chapter – Happy Gallery – where Bogum showed his fans some pictures that have never been released before. One of them was taken the day before in front of Marina Bay Sands. 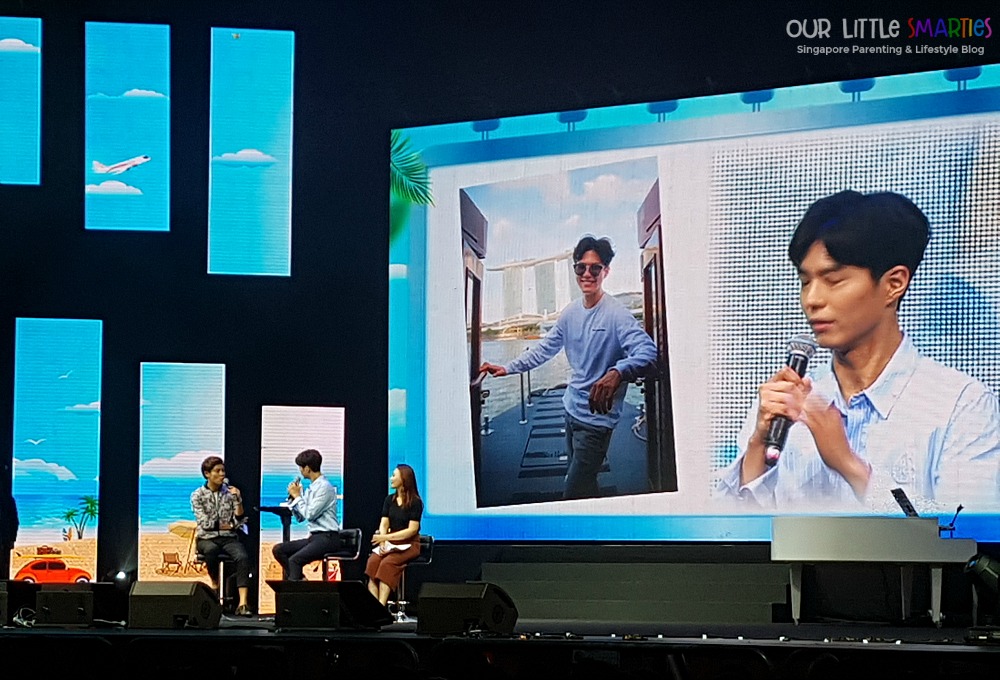 He also answered some questions from the fans and shared why he named his fan tour as “Oh Happy Day”. He said that meeting his fans is a happy occasion, and thus the name was chosen. It’s even happier for us – his fans, to meet him in person. 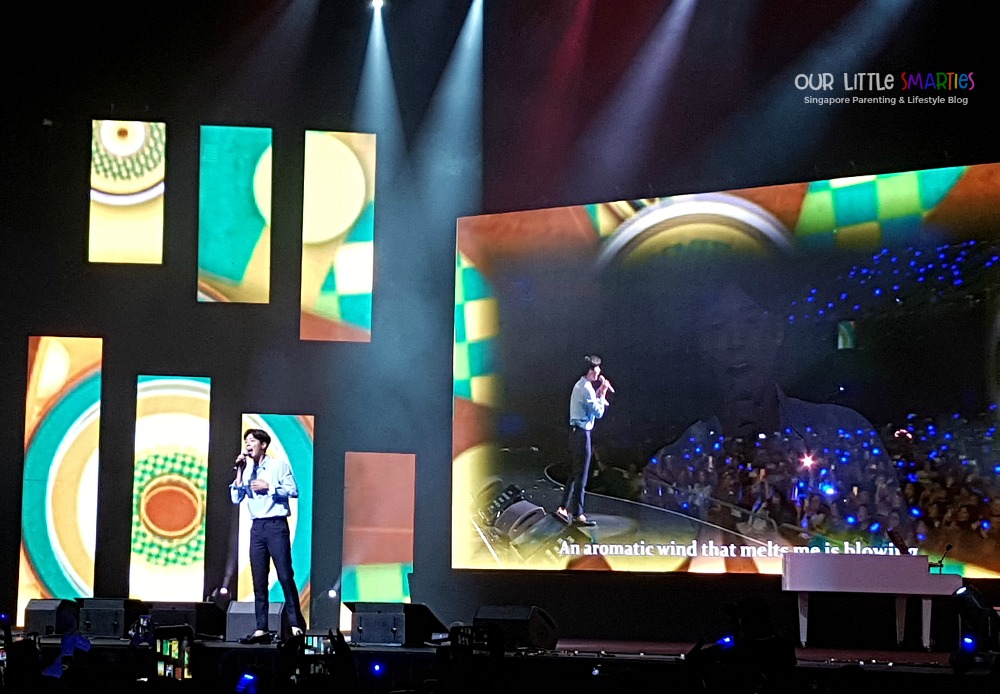 Bogum sang one of the OSTs in Reply 1988 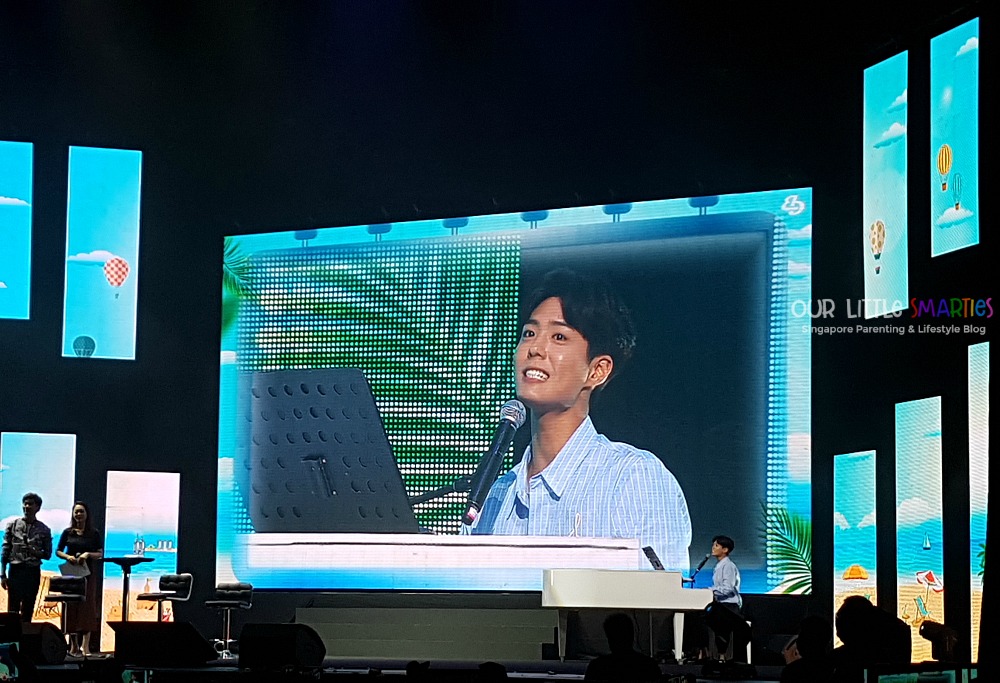 He sang a birthday song to his fan, Shirley (aw! lucky girl!)

Then, we moved on to the 2nd chapter where the emcee, Danny Yeo, and Bogum discussed the top 3 favourite scenes in “Reply 1988” and “Love in the Moonlight” chosen by his fans. He also shared his favourite scenes for both dramas. I enjoyed this chapter a lot because there were lots of replays of the scenes in both dramas – and lots of FEELS too! 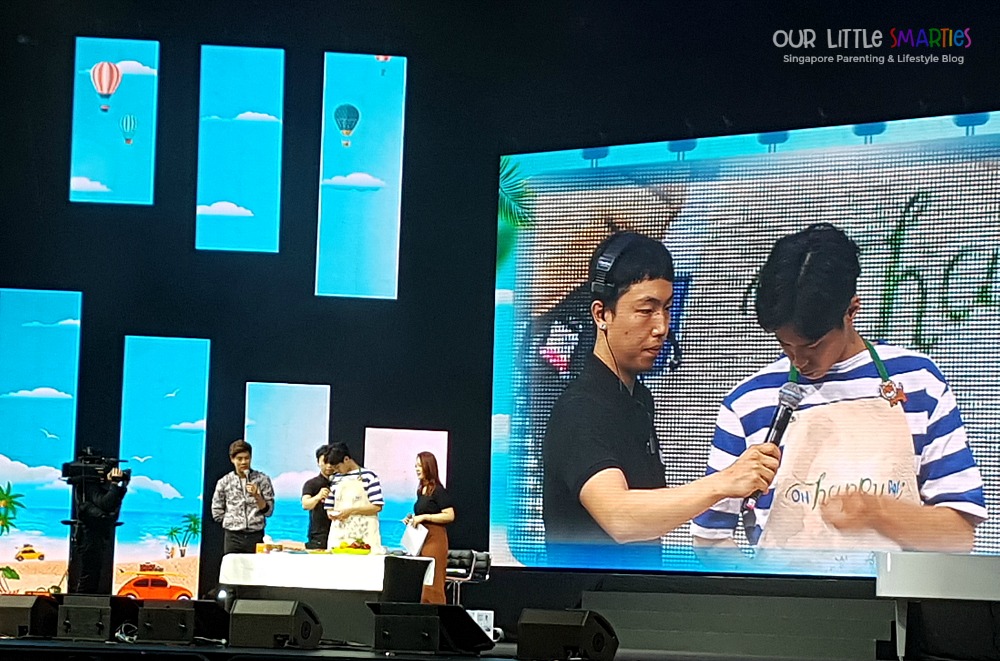 The 3rd chapter is where fans were selected to go on stage to re-enact their favourite scenes with Bogum. In the next section, Bogum was introduced to two local food (roti prata and carrot cake), and it was absolutely hilarious. He loves the roti prata’s curry so much that he mixed them with carrot cake. Ha! Okay, from now on, I’ll eat carrot cake with curry too. ^___^ 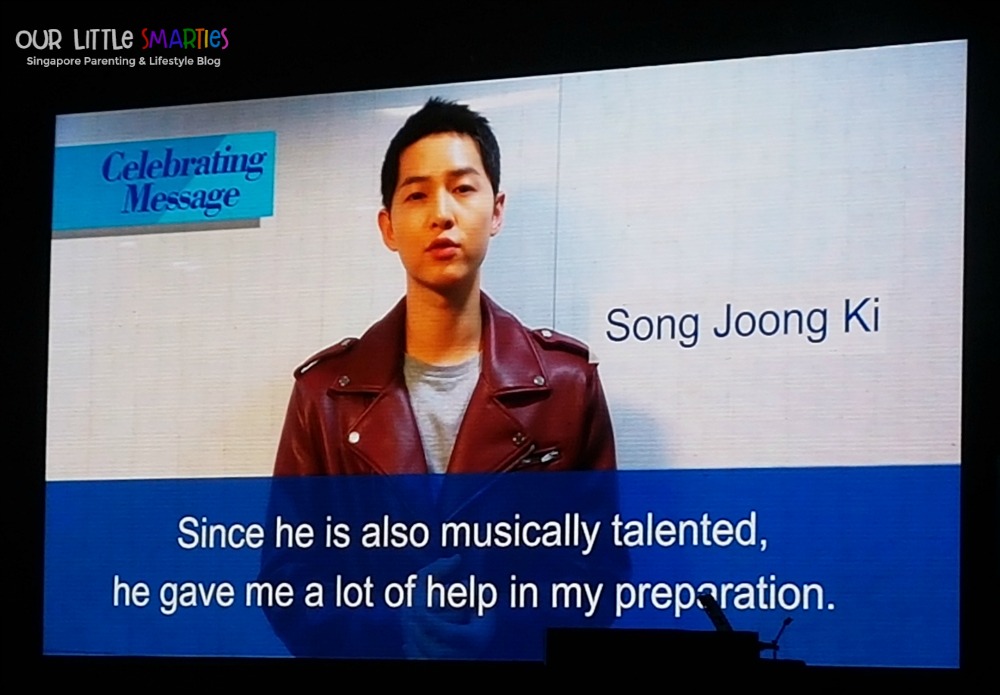 Next came the MOST exciting part where fans were shown some messages from Bogum’s friends to congratulate him on his Asia Tour. Yes, everyone was extremely excited to anticipate Song Joong Ki’s arrival at this moment.

Needless to say, I screamed to the top of my voice when Joong Ki made his grand appearance. Gosh, he was SO handsome – flawless skin, baby-faced (quite skinny too!). Two servings of eye candy were simply TOO hot for me to handle! Haha! 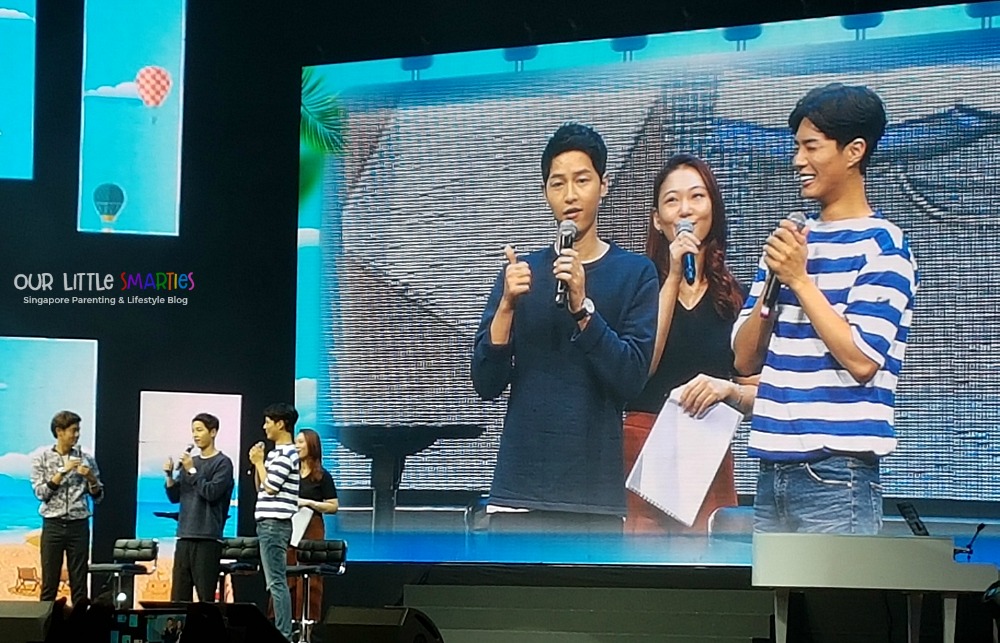 Dressed in a casual attire, he looked absolutely relaxed and happy throughout the event. Seemingly effortlessly, he made the fans bursting with excitement. I really adore these Blossom Brothers to the moon and beyond! They are the perfect combo!

Joong Ki is so witty and cheeky. When the emcee said they were going to play some games and present “gifts”, he heard it as “kiss”. Not sure if he did it purposely or not, haha! Throughout the event, he kept repeating, “Ah… Gifts! No Kiss!” playfully. This guy sure knows how to tease his fans. 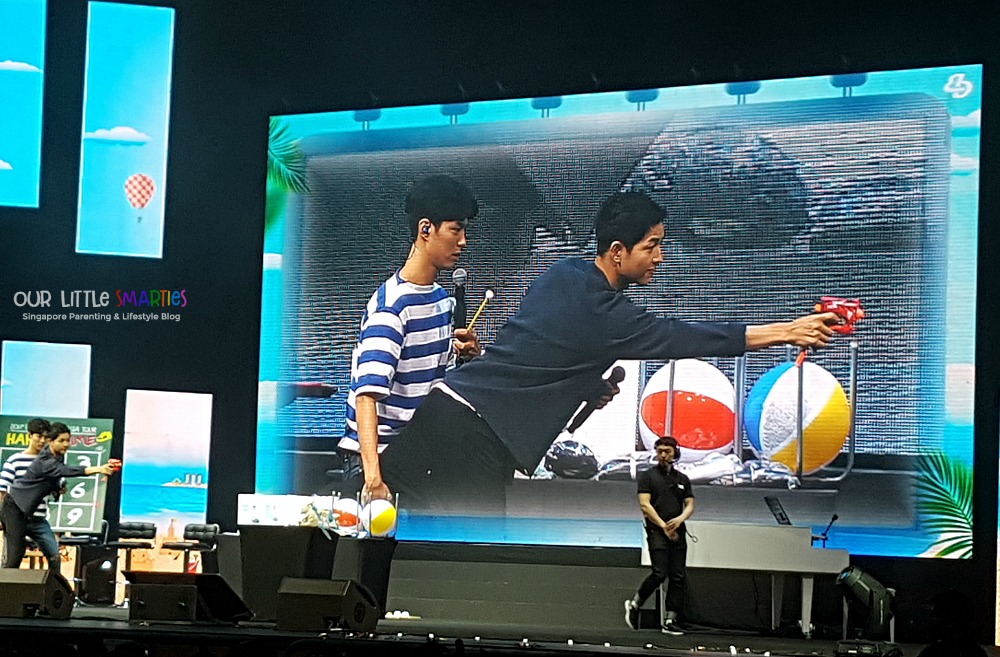 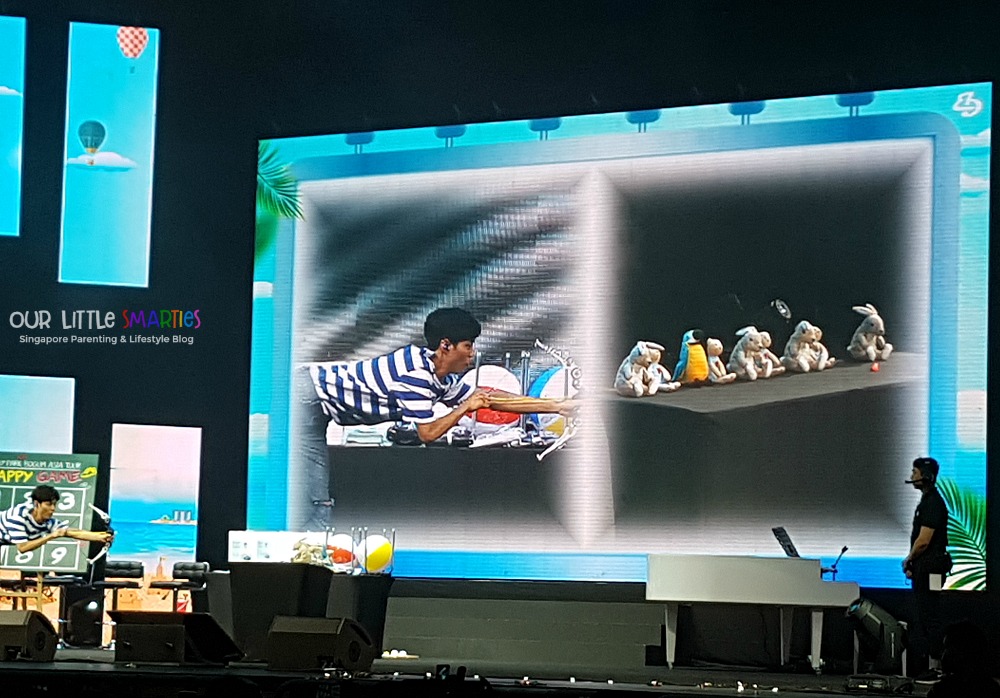 The boys’ shooting game was hilarious!

I can repeat this a hundred times – Joong Ki is really swoony and charming!  😀  😀  😀

I was not lucky enough to be selected to go up the stage to play games with them. Personally, I felt that the luckiest girl that night was the one being selected by Joong Ki to play ball games with him. She gets to HUG him several times!!! And the emcee jokingly said, “Don’t keep hugging the guy, catch the ball!” Hahaha.  😛 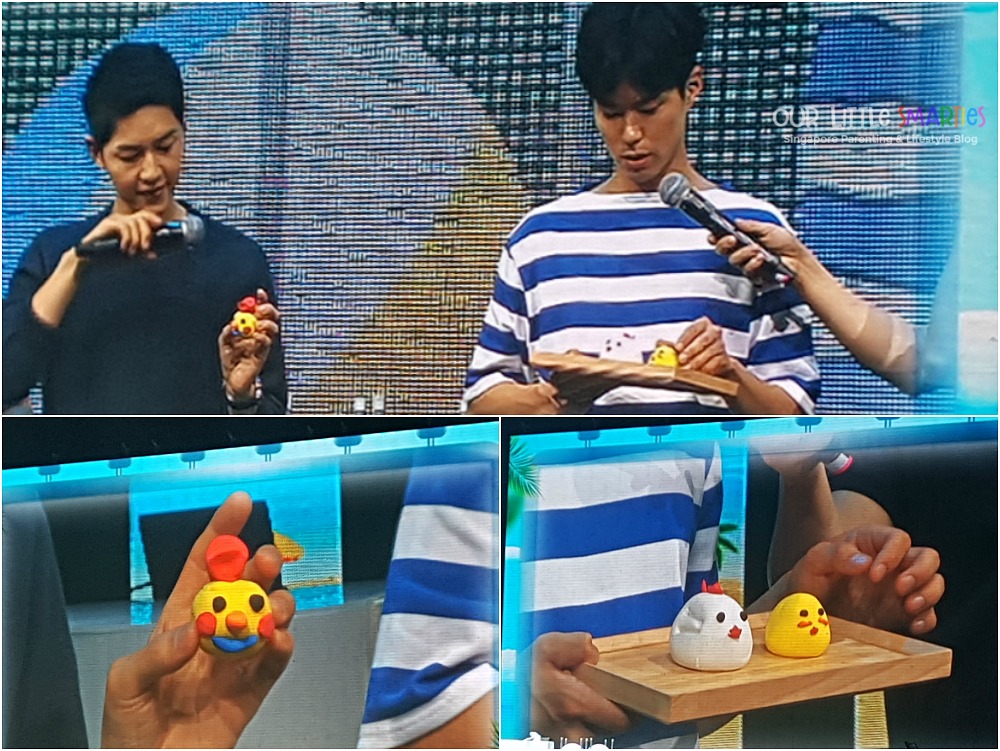 One night, many firsts. I couldn’t imagine that I could meet Park Bo-Gum and Song Joong Ki in real life. This event was extremely memorable to me. It was awesome to scream like a fangirl and have a crazy night out.

Last but not least, if Park Bo-Gum ever held a fan meeting again, please attend it. It’s worth it! He’s fun-loving, sings beautifully, plays a piano, presents personal gifts, and sincerely thanking thousands of his fans by HI-TOUCHing every one of them. He’s sincere and always gives his BEST to his fans. 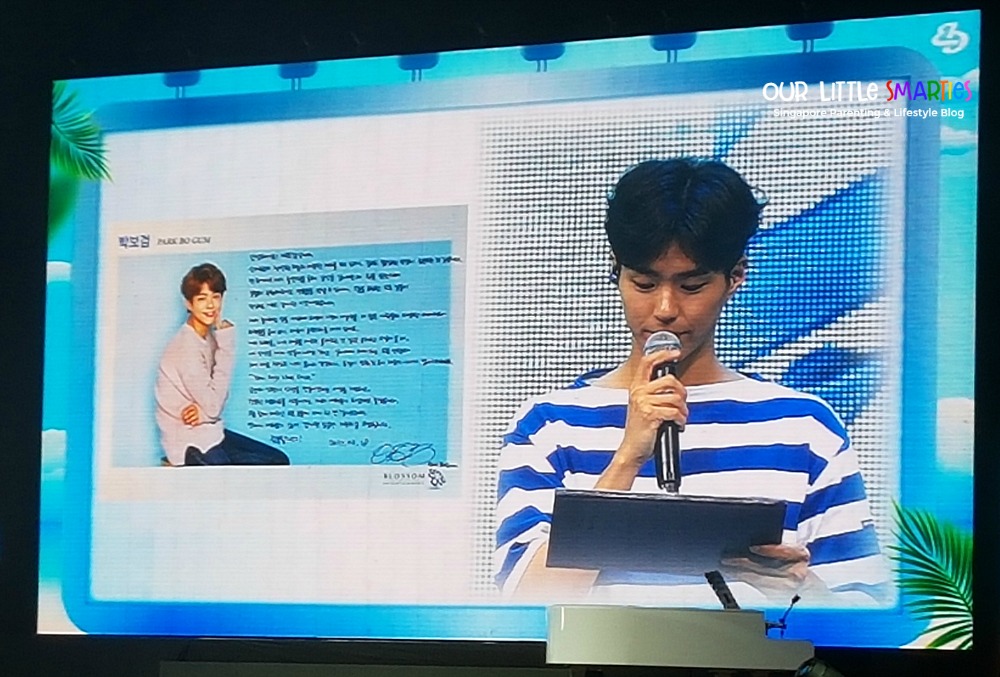 His heartfelt speech at the end of the event

Bogum sang his last song at the fan meet, he sings really well!

I sincerely hope that you’ll like Singapore and will come back again really soon. I wish you happiness and continued success in your life.  😀.

Emily,
PBG & SJK in one go. Geez, I’m so jealous!! Haha! I must join this kind of fan meet event in future.

hello! How long did his fan meet last? I’m planning to go to one next yr. I’m a 3 yr fan of him and has always been loyal to him since then. I went to his fansign event in Seoul but was only lucky enough to catch a lil glimpse of him going to the event (I couldnt get any tickets that time). So, this time I don’t want to pass this opportunity because he will be visiting my country next yr. I am an ajumma too around mid 30s and I have never crushed a Korean star like the way I am with him now. hahaha. He inspires me a lot!!!! I hope you could give me some tips. I hope I can be chosen to play a game with him or just shake his hands. I would be the happiest girl alive then 😉

Hello Love,
The event lasted about 3 hours, excluding the ending hi-touch session. I didn’t wait for the hi-touch as thousands of fans were queuing (dunno how long will it takes), and my weak heart may not be able to handle it if I can see him so up-close LOL. Bogum is such a great performer, he truly surprised me with his singing and piano skills. How in this world can someone be so talented and good-looking! Haha! He’s very polite and friendly too. And the best part is Song Joong Ki was there too!!! I almost lost my voice from all the screaming.

It’s totally worth it! This year, I’m definitely going again. Am prepared to fight the “online war” to get tickets to his fan-meeting. I’m sure that the ticket’s website will crash again (like last year) due to super high traffic. Imagine how fan base must have doubled and tripled since last year. All the best to you in securing your tickets.