Last month, we visited Chiang Mai and spent four days in the city. I’ve been to Bangkok several times but this was my first time to Chiang Mai – the largest and most culturally significant city in northern Thailand. Much to my surprise, it is full of friendly locals, incredible food markets, dozens of beautiful temples, a relaxed vibe, and beautiful landscapes. 😀

In addition, it has a lot of delicious Western food, cafes and bars all around the city, but despite that the “Thai-ness” of the city hasn’t gone away. A visit to this city will certainly leave you enamoured. And if you travel in December, like we did, you’d love it even more. The cool season (December to February) is the most popular time to visit Chiang Mai, weather-wise. During the day, the temperatures max out at a pleasant 28°C and drop rapidly after sunset, sometimes to as low as 10°C.

Now, let’s check out our suggested itinerary in Chiang Mai.

Things to See and Do in Chiang Mai

1. Visit Wat Phra That Doi Suthep and its 309 Steps

This is a must-visit in Chiang Mai. In fact, when we were there, the temple was full of tourists and buses. We couldn’t even take a decent photo of ourselves, hahaha! 😆 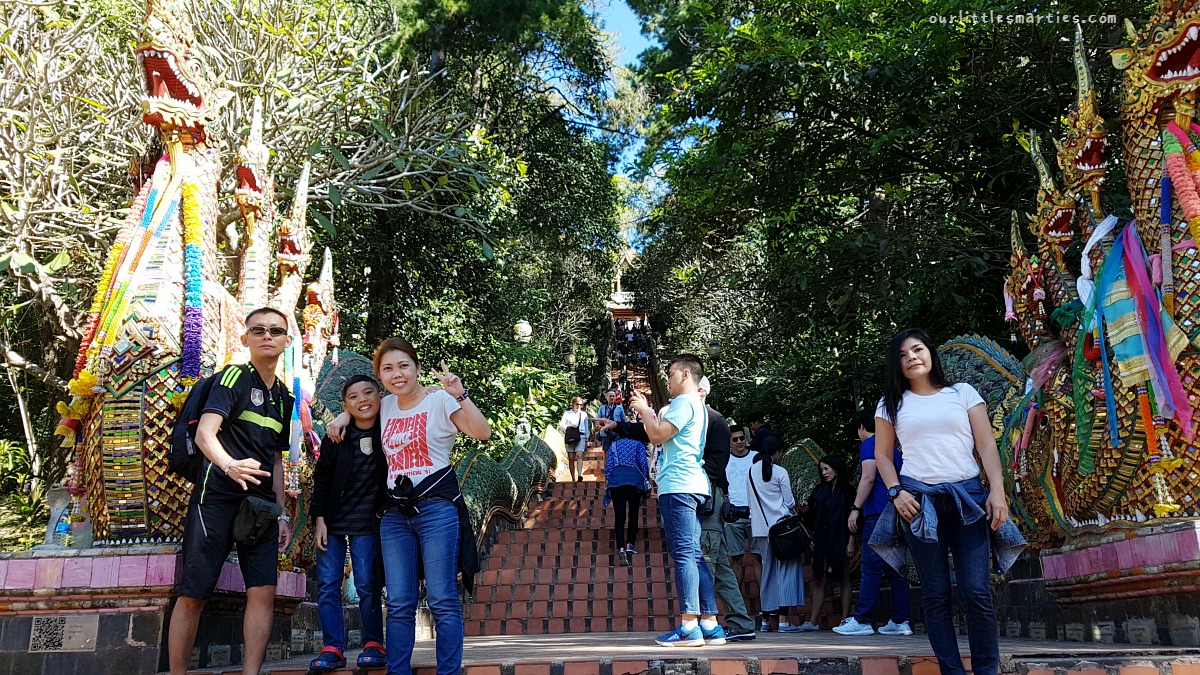 Here we are standing in front of the 309 steps to reach the pagodas!

For those of you who have visited the Big Buddha in Hong Kong, you should have experienced climbing 268 steps. This one is 41 steps more! I almost fainted halfway through it LOL. Nonetheless, the good news is – you can take an electric tram up if you’re not keen to walk (with a small fee of 50 THB for foreigners).

Wat Phra That Doi Suthep is often referred to as “Doi Suthep” although this is actually the name of the mountain where it’s located. Located 15km from the city of Chiang Mai, it is the most famous temple that is visited by thousands of tourists and Buddhist pilgrims from all over the world. From the temple, impressive views of Chiang Mai can also be seen. 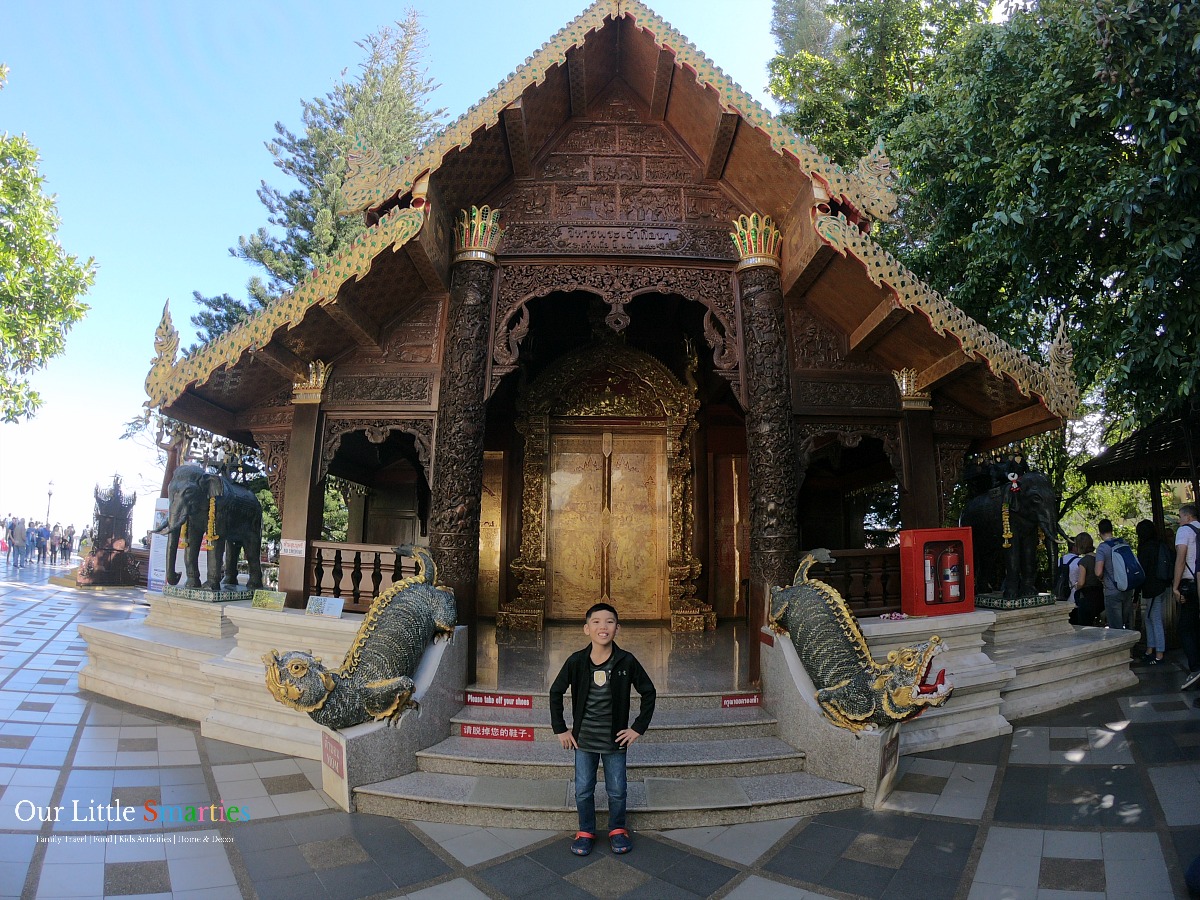 Admission is 30 THB. It’s open from 6am-6pm. We booked the Chiang Mai City & Temples Half Day Tour by Tour East from Klook (S$35.60 per pax) that includes admission fee, pick-up and drop-off at our hotel and English-speaking guide. This is a join-in tour, so we met travellers from other countries too. The group size is small (max 12) and we travelled in a mini bus. Overall, it was an enjoyable tour. After visiting Wat Doi Suthep, we also visited several other temples in Chiang Mai in this tour (more in item #2 below).

Chiang Mai is filled with temples, some dating as far back as the 13th century. The main ones worth visiting are Wat Suan Dok, Wat Chedi Luang, Wat Jet Yot, Wat Chiang Man, and Wat Phra Singh (the first two were also covered in our tour).

Wat Chedi Luang is the oldest temple in Chiang Mai, and one of the most important temples. It’s about six centuries old. Wat Suan Dok is best known for its large number of pagodas in which the ashes of the Chiang Mai Royal Family are enshrined. It is all white and has some unique features such as the tremendous chapel.

3. Shopping at the night bazaar

Chiang Mai is the main handicraft center of Thailand, thus the night bazaars sell all sorts of crafts in Chiang Mai. Everything is sold at non-fixed prices, and you can bargain a little. If you plan to do some shopping in Thailand, then the night bazaar will be where you’ll find the best deals. Open daily from 6pm-12am.

We stayed at Movenpick Suriwongse Hotel, which is just across the street from Anusarn Night Market – one of the largest night bazaars in Chiang Mai. Lively and colourful, you can find local vendors selling virtually everything – clothing, shoes, lighting, music, handicrafts, gifts, and souvenirs. If you’re hungry, check out the many authentic and inexpensive Thai, Asian, Indian, and seafood options. You can also rejuvenate with a traditional Thai massage or a fish foot spa here. 🙂

Chiang Mai is the most popular place in Thailand for cooking classes, offering a great variety of classes and amazing deals. You begin your class by going to the market, hand-pick fresh vegetables and herbs for your desired dish, learn more about Thai produce before heading back to the kitchen to cook a few dishes and eat a variety of food. Class prices range from 800-1,000 THB.

5. Head to the Chiang Mai Zoo and Aquarium

Chiang Mai Zoo is home to a wide variety of majestic and fascinating wildlife, including rarer species like the panda. Situated at the foothill of Doi Suthep mountain, the zoo is also surrounded by hilly terrain which is home to thousands of species of wild plants and flowers adorning the natural landscape of valleys, streams, and waterfalls.

Sadly, we didn’t have enough time to visit this place. Since we’ve planned to visit Safari World in Bangkok, we decided to give it a miss.

If you love to explore nature, visit Thailand’s Doi Inthanon National Park – also known as “The Roof of Thailand”. Among all the places I’ve visited in Chiang Mai, this is the one that I loved most. It’s definitely the highlight of my trip! 😀

The main attractions of the park are the summit of Doi Inthanon for its spectacular views, several waterfalls, a few trails and the two chedis (Buddhist stupas) dedicated to the King and Queen’s 60th birthday anniversaries.

The tour picked us from our hotel at 8am. We went on a minivan that sits 12 people. Overall, the condition of the van was acceptable. Our tour guide Katie was very nice and friendly too. The journey to the park took 1.5 hours. The first two attractions are Wachirathan and Sirithan Waterfalls. 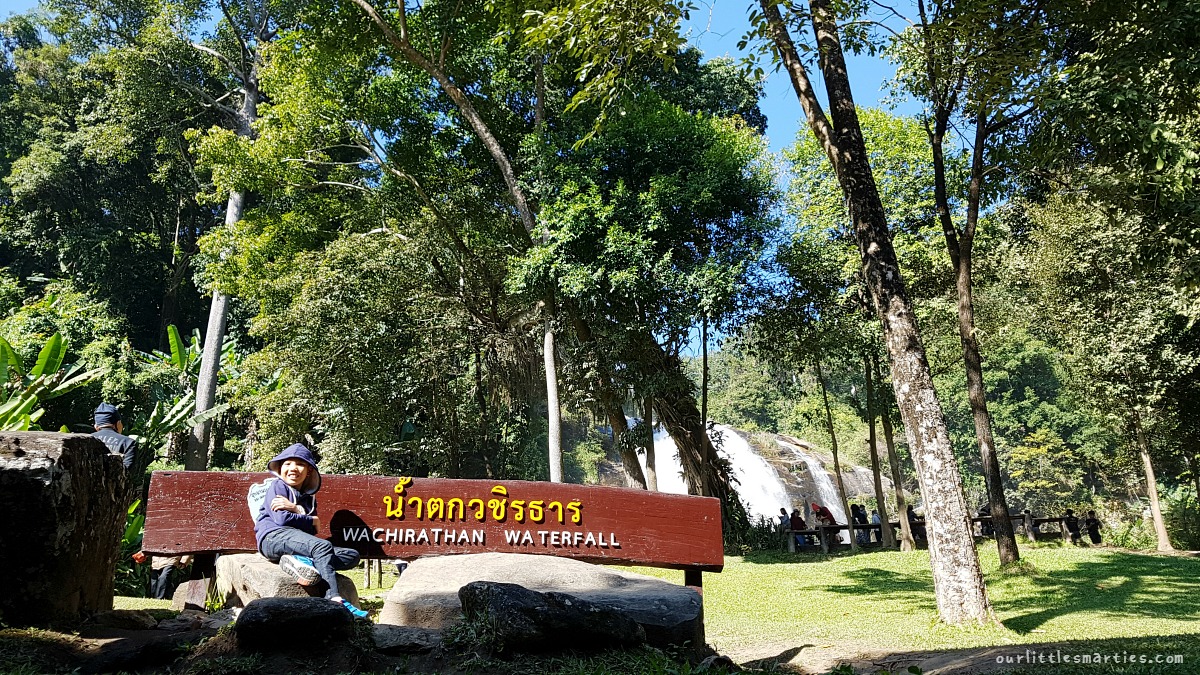 Wachirathan Waterfall is one of the most impressive waterfalls in the park with small rainbows appearing every now and then, where the water hit the ground. 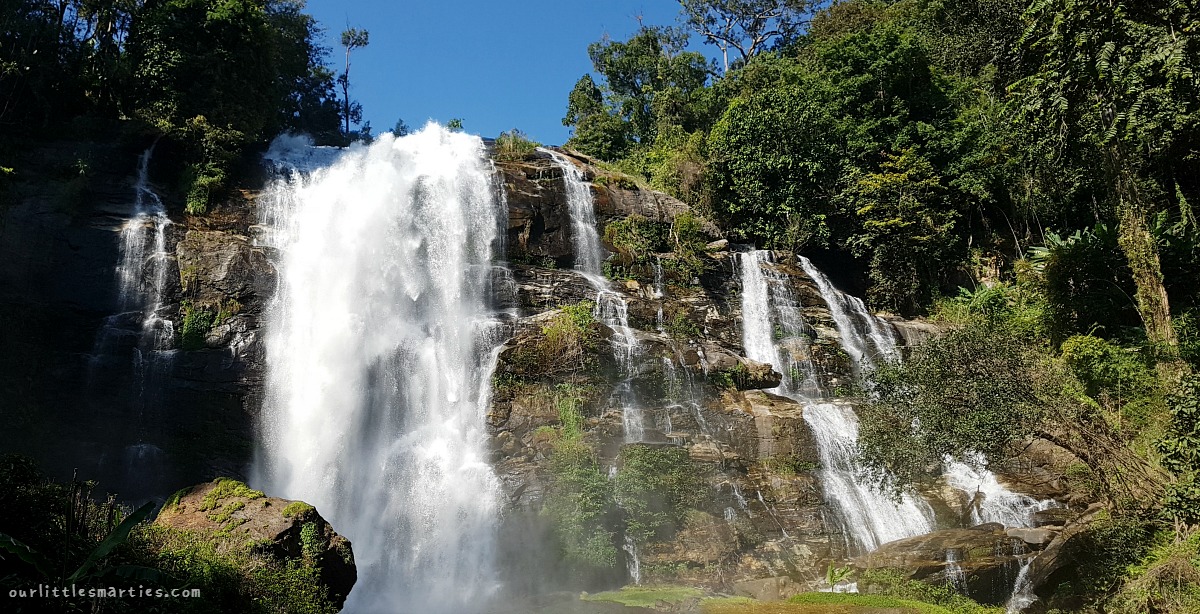 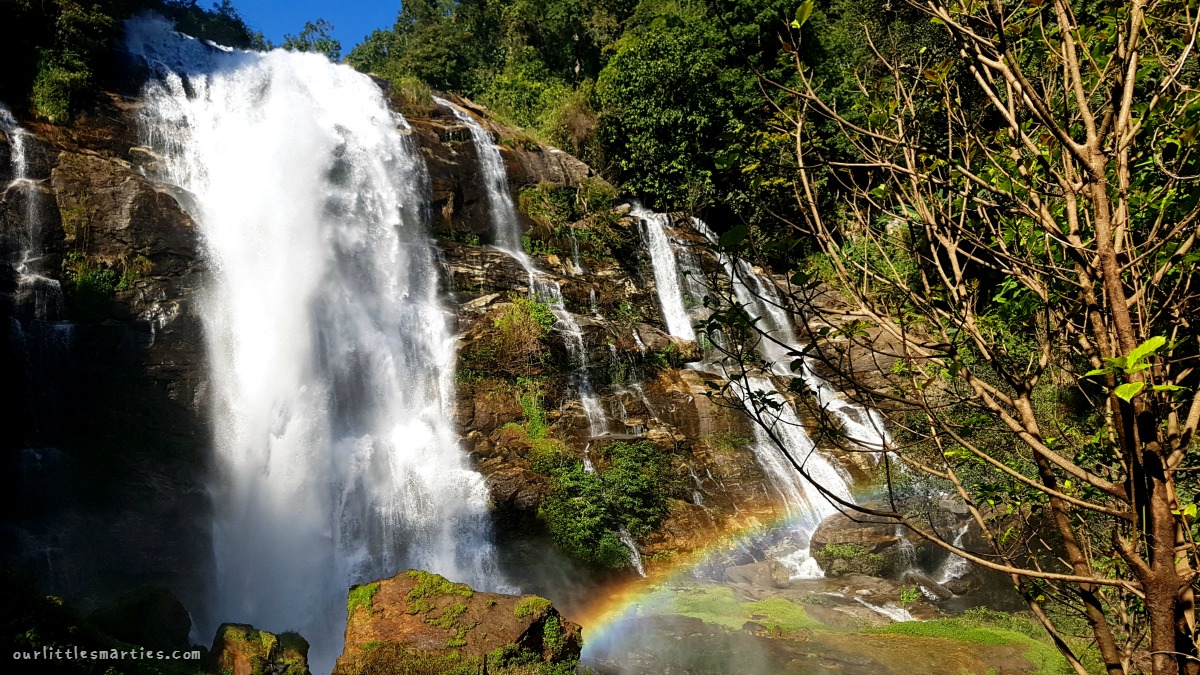 Next, we headed to Doi Inthanon Summit which is the highest peak in Thailand. In the early morning, the weather at the summit was 4°C. By the time we reached the summit, it was noon time and the weather went up to 18°C. Overall, it was an enjoyable weather to take a stroll at the summit while enjoying its lush highland forest scenery. 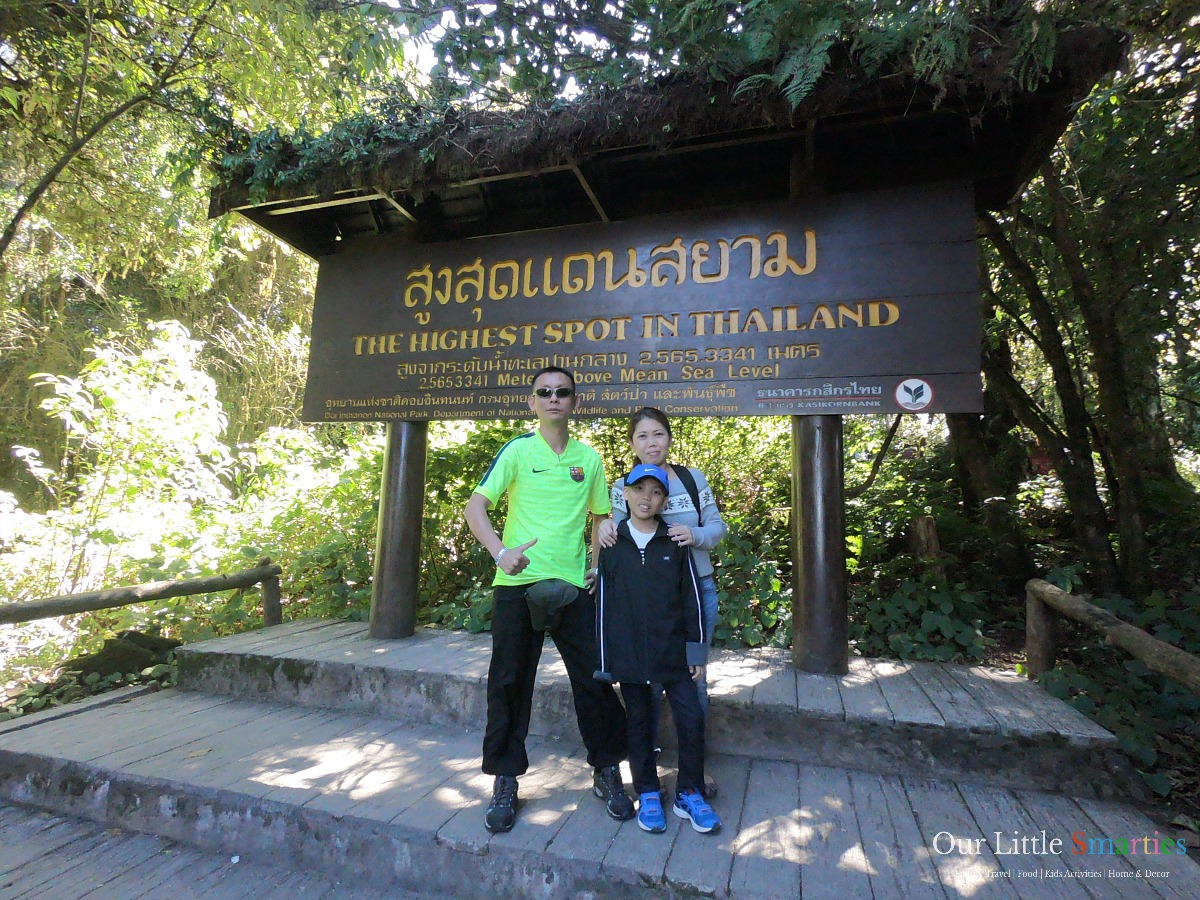 Continue on to the King and Queen’s chedis that were built to commemorate the 60th birthdays of King Bhumibol Adulyadej and Queen Sirikit. They sit on opposite peaks, facing each other and share the same design. Both of them are surrounded by picturesque gardens and views that are probably the most breath-taking in the whole of Thailand. We spent an hour walking around them, admiring the architecture, the flowers, the panorama, and breathing in the fresh, cool air.

The tour also includes lunch and ended at about 3:30pm. From there, we took another 1.5 hours to get back to our hotel. This is a great activity, suitable for families and kids, if you want a break from the bustling city life. Klook Doi Inthanon National Park Tour is priced at S$54.30 per pax (full day tour + lunch + transport + admission fee).

7. Explore up north to White Temple in Chiang Rai and Golden Triangle

First of all, I don’t recommend this tour if you’re travelling with very young children as the time spent on the road is quite long. But if you’ve school-going children, it’s a good opportunity for them to visit the beautiful White Temple and see the Golden Triangle. Edison enjoyed these 2 places a lot – although he grumbled about the long hours sitting in the van LOL. 😛

Our tour started as early as 7am. Our first destination was Maekhajan Hot Springs, we took a short break before continuing our 2+ hours journey to Chiang Rai.

Wat Rong Khun, commonly known as the White Temple, is the highlight of this tour. With its modern Buddhist design and intricately carved facade, the temple is unlike any other religious structure in Thailand. By the time we arrived at 10:30am, the throngs of tourists have already reached their peak. The morning sun hit every detail of the building with intricate all-white exterior to sublime perfection. 😀 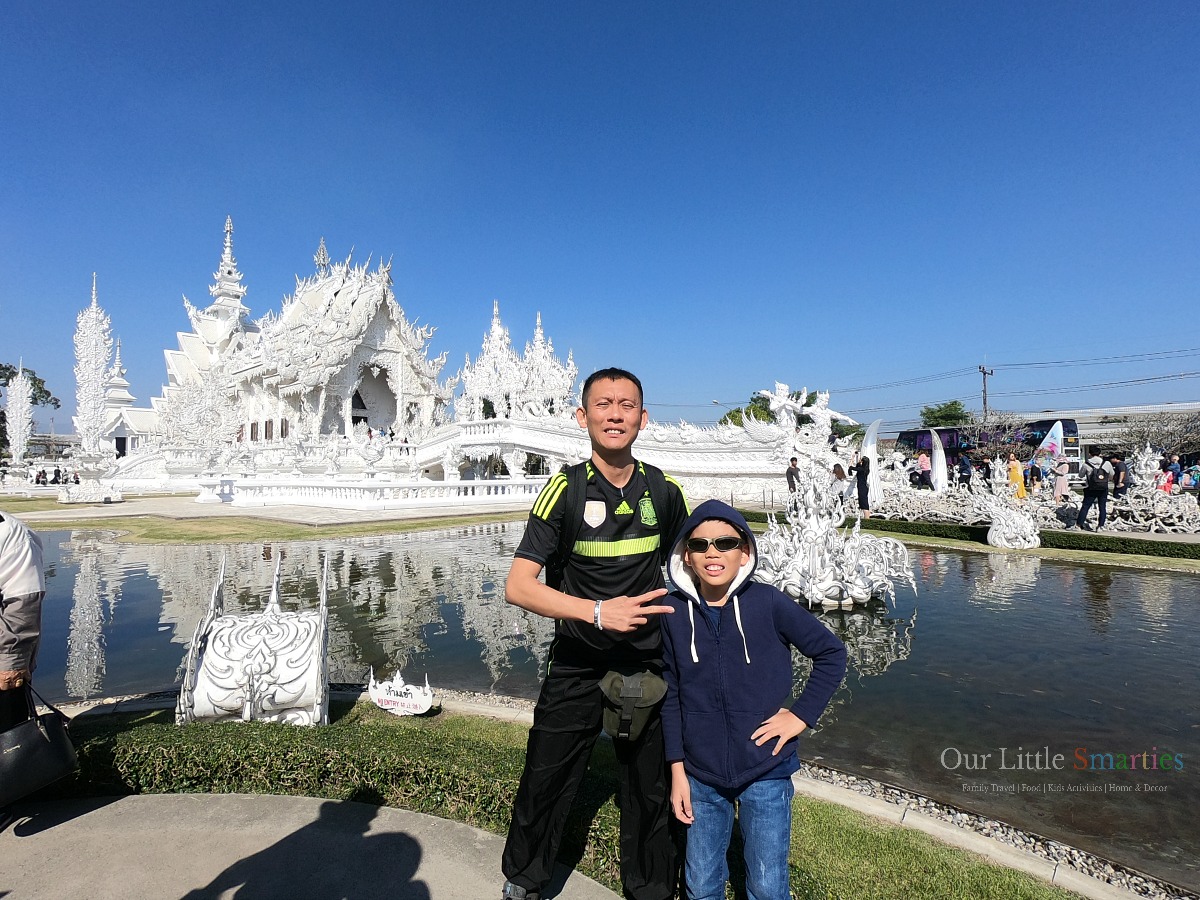 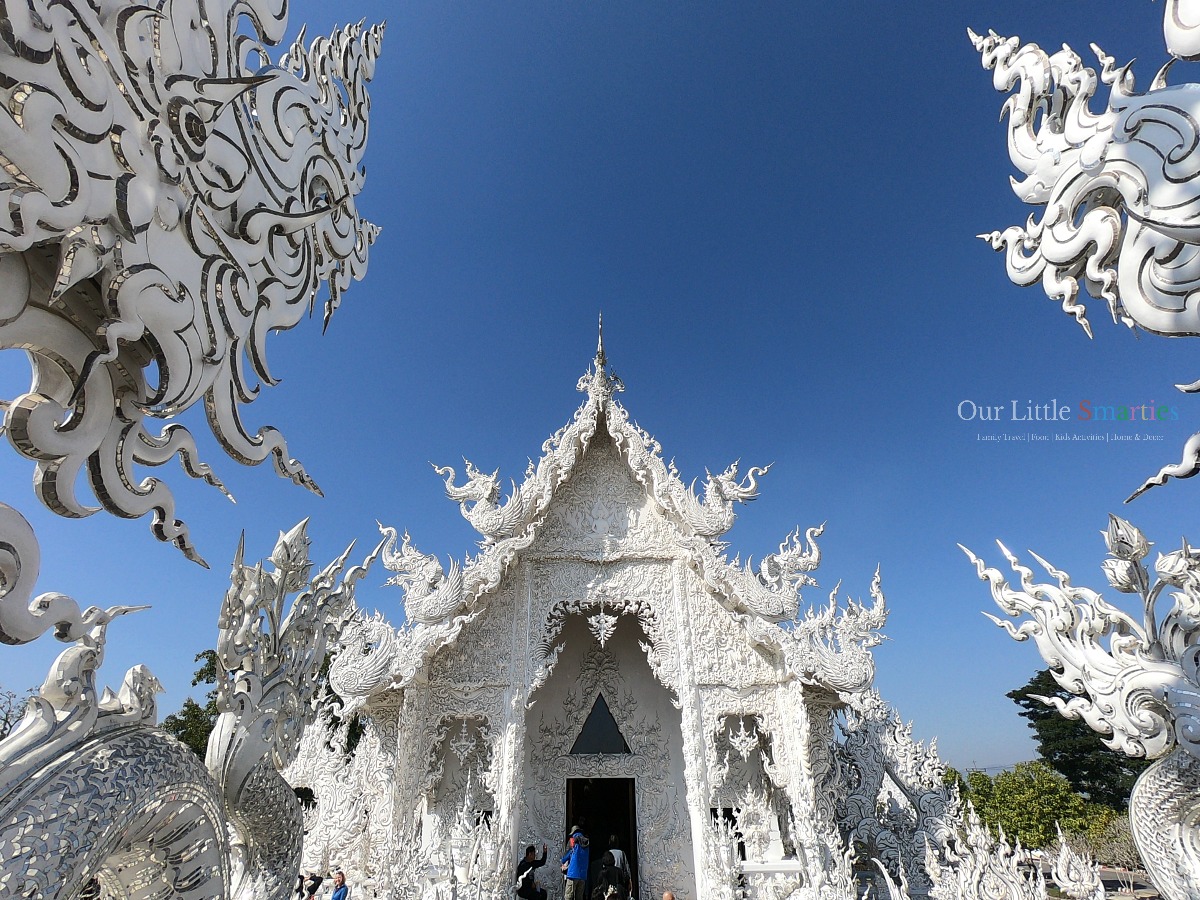 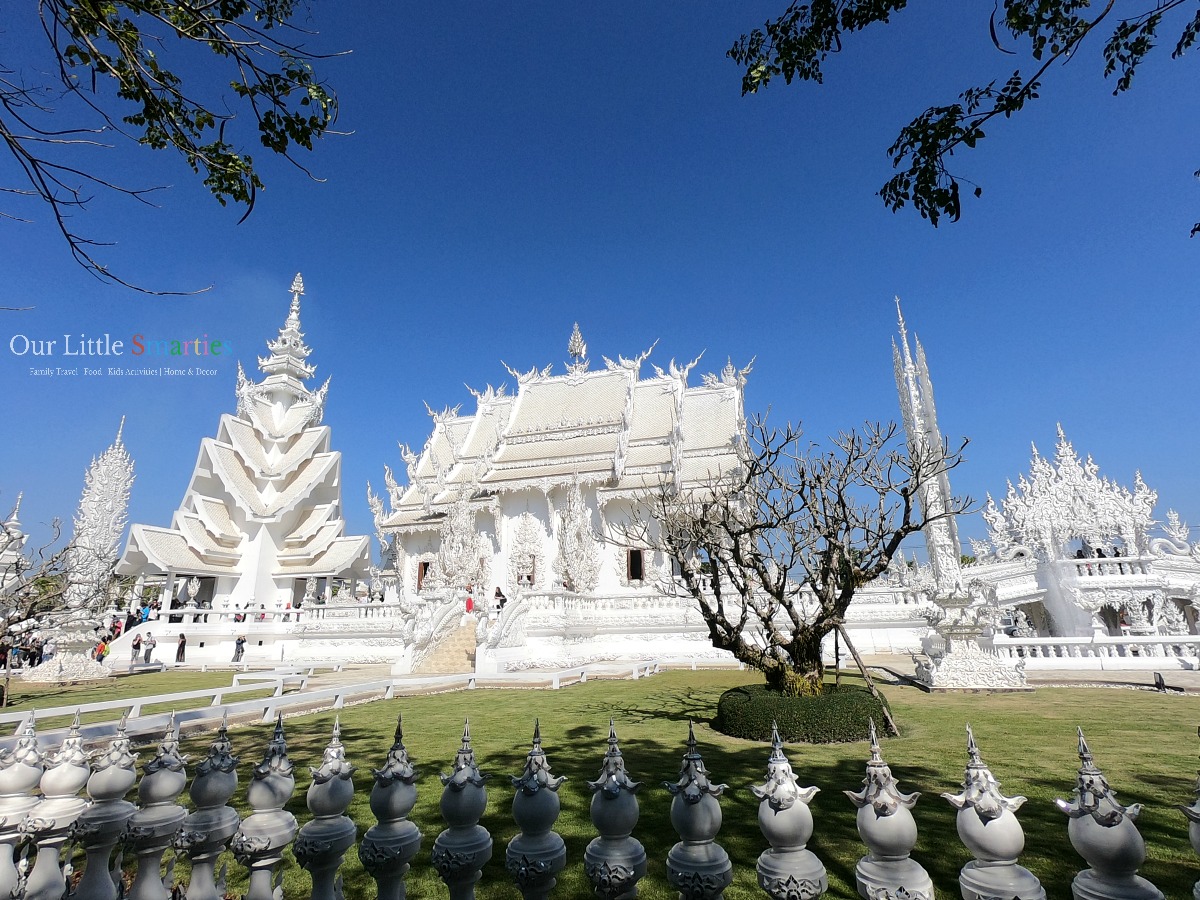 We spent an hour at this temple before continuing another hour of Karen Long Neck Village. The Karen tribe, which is unofficially called the Long Neck tribe, came to Thailand from Burma, when escaping war and violence in their country. They are famous for their women, who wear golden rings around their necks.

The entrance to the village is a bit overpriced, in my opinion. There’s nothing much to see except a market and their houses.

Next, we departed to the Golden Triangle (another 1.5hr road trip). The Golden Triangle is an area covering 950,000 square kilometres where a significant portion of the world’s opium has been produced since the beginning of the twentieth century, but is now mainly a tourist attraction. This area is centered around the meeting point of the borders that separate Laos, Myanmar, and Thailand. 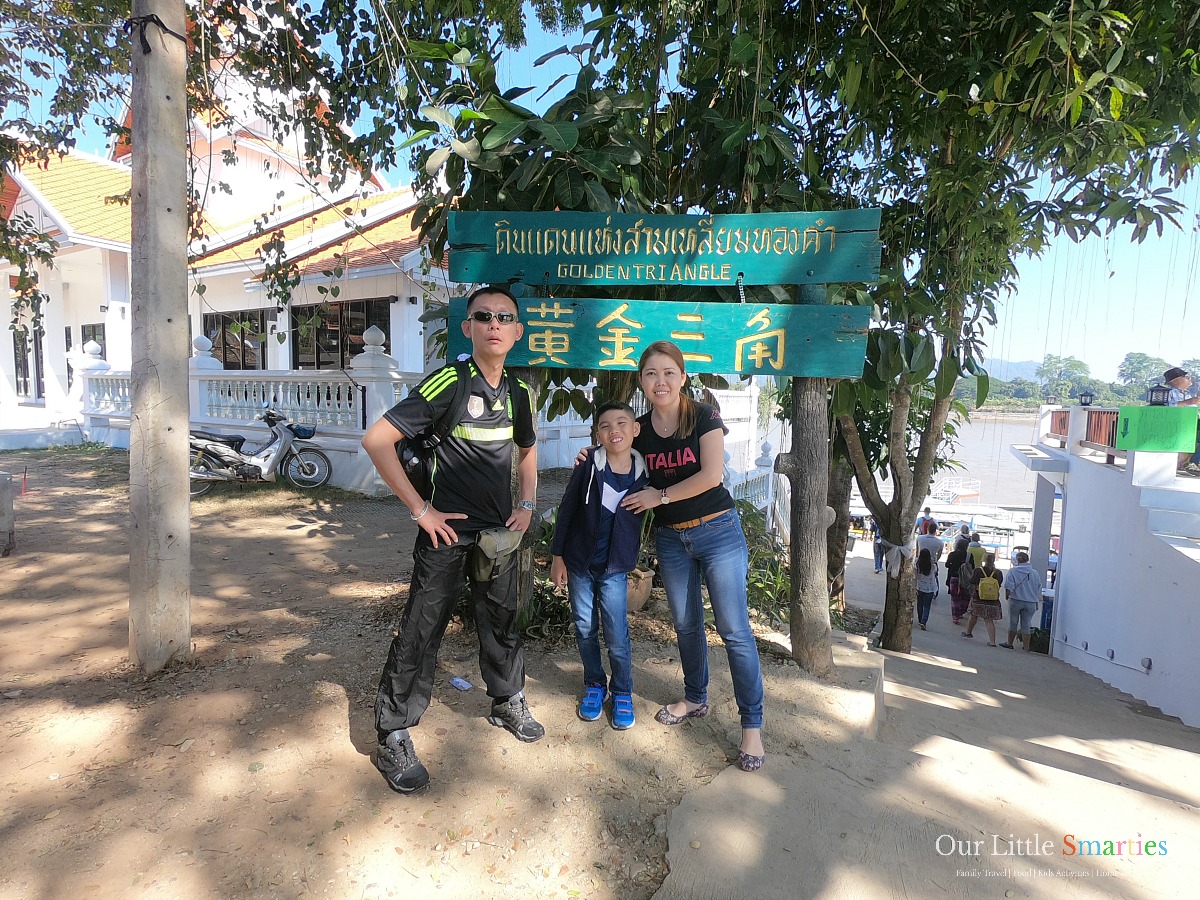 Personally, I feel that the concept of seeing three countries joined and divided by a river is fascinating. You can pootle across to a touristy Laos market without paying for a visa and enjoy the 20 minutes boat ride across Mekong River – a legendary river used for trade and transport for thousands of years. Don’t expect anything too classy here though. 🙄 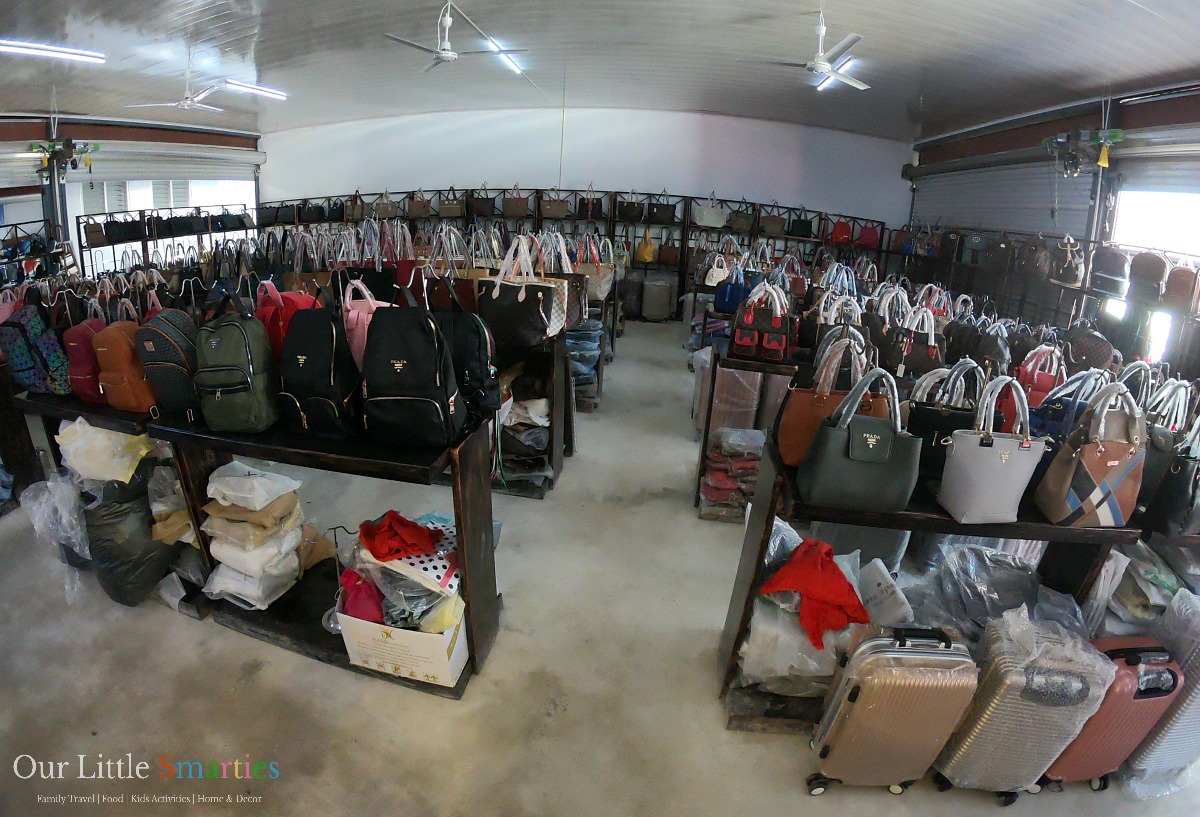 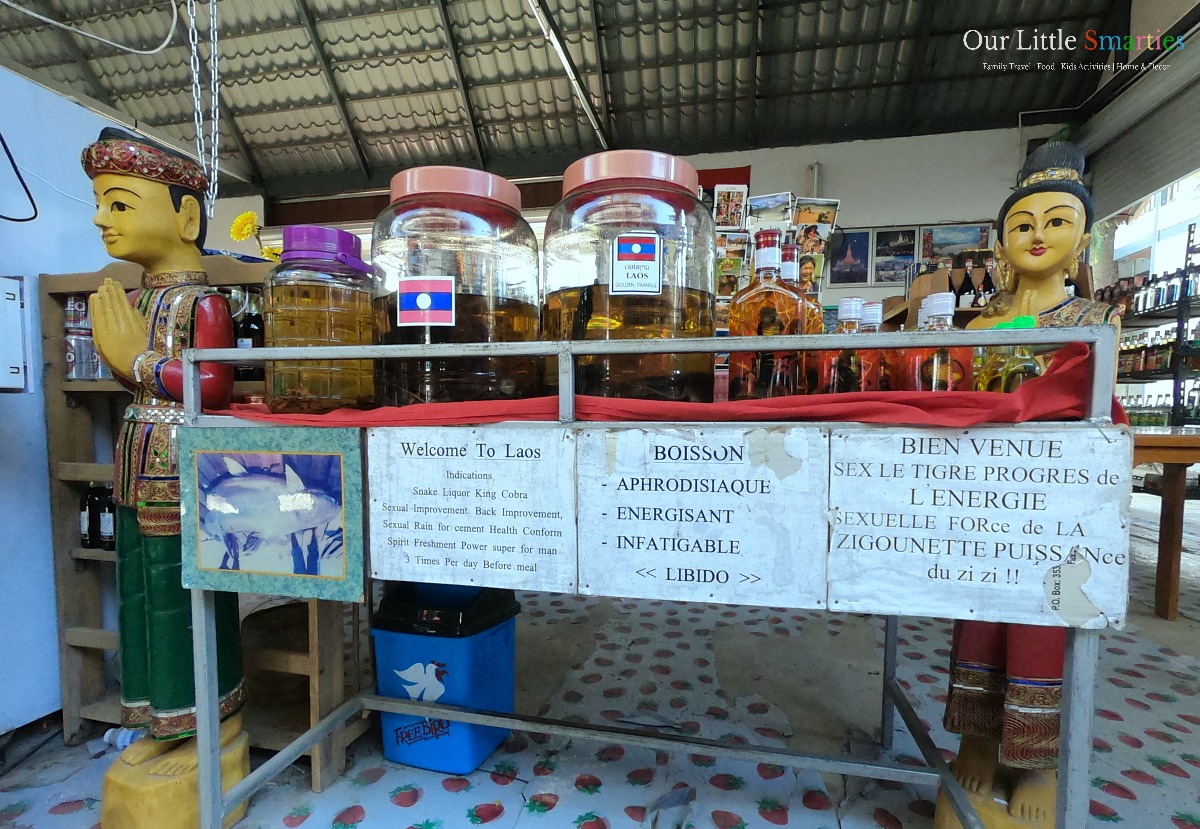 Over at Laos, there is a wide array of merchandise from authentic snake whiskey to fake designer’s bags and clothing. The prices are very cheap, sold in Thai Baht (you can still bargain LOL). After this, we went for a late buffet lunch – it was almost 3pm! After lunch, we headed back to Chiang Mai in another gruelling 5 hours road trip. 😥

Klook Chiang Rai & The Golden Triangle Tour is priced from S$48.20 to S$64.90 with optional Mekong River Boat Ride and Karen Long Neck Village. If you prefer to travel free-and-easy, you may consider booking a Chiang Rai Private Car Charter at S$155.

Disclosure: This post contains affiliate links that allow me to earn a small commission from Klook if you click on them and make a booking (at no extra cost to you). Prices are accurate at publication time. Thank you for your support!

Buds by Shangri-La: A World of Family Fun Awaits You at Shangri-La Hotel Singapore