Located 150 km to the west of Bangkok, Kanchanaburi is the third biggest province in Thailand. It was the place where prisoners of war were exploited under the Japanese army during World War II. They worked to build the rail route from Thailand to Myanmar, and now that rail route is called “Death Railway”.

The brutal story of the POWs was made into a movie in 1957 called “The Bridge Over the River Kwai”. I have yet to watch it, what about you? 🙂 Since then, Kanchanaburi became a popular tourist destination. Besides the rich history, the province is also filled with magnificent landscapes and natural charming beauty.

Truth be told, I’m not a history buff. When V suggested to visit Kanchanaburi, I wasn’t keen at all because it is quite far from Bangkok and doing a day-trip can be tiring (reminds me of our last day trip from Chiang Mai to Chiang Rai). Much to my surprise, Edison was keen to go too – he doesn’t mind the van ride. 😆

Talking about join-in tour in Thailand (if you haven’t been to one), I’ll share some info with you. The tour is usually conducted in a minivan with a capacity of 12, a local tour guide and a driver. You’ll join tourists from other countries. Once your booking is confirmed, the operator will provide their contact info and pick-up time. Do note that the pick-up time is the starting time when the driver picks-up tourists from various hotels. If you’re the last one to be picked-up, you may have to wait up to 30mins or more, depending on the traffic conditions.

For this tour, our pick-up time was 6:30am. Luckily, our hotel breakfast started at 6am, we could have our breakfast before the tour starts (plus we were the last to be picked up). The driver took about 45 mins to pick-up all the passengers before departing Bangkok, and we arrived at our first destination – JEATH War Museum at about 10am.

Situated about 4 km from Kanchanaburi town is the River Kwai bridge. JEATH War Museum is located next to the bridge. JEATH, as its name says, stands for 5 countries who have participated in the war – Japanese, English, Australia, Thailand and Holland. Admission is only 40 Baht (included in the tour).

The museum isn’t big, so we covered the whole area in less than half an hour. It showcases a collection of items connected to the building of Death Railway during World War II, how the POWs lived and were treated during that time. Personally, I felt that the museum is lack of maintenance. Lots of the information written on the walls was faded and the displays were greatly neglected. 😦 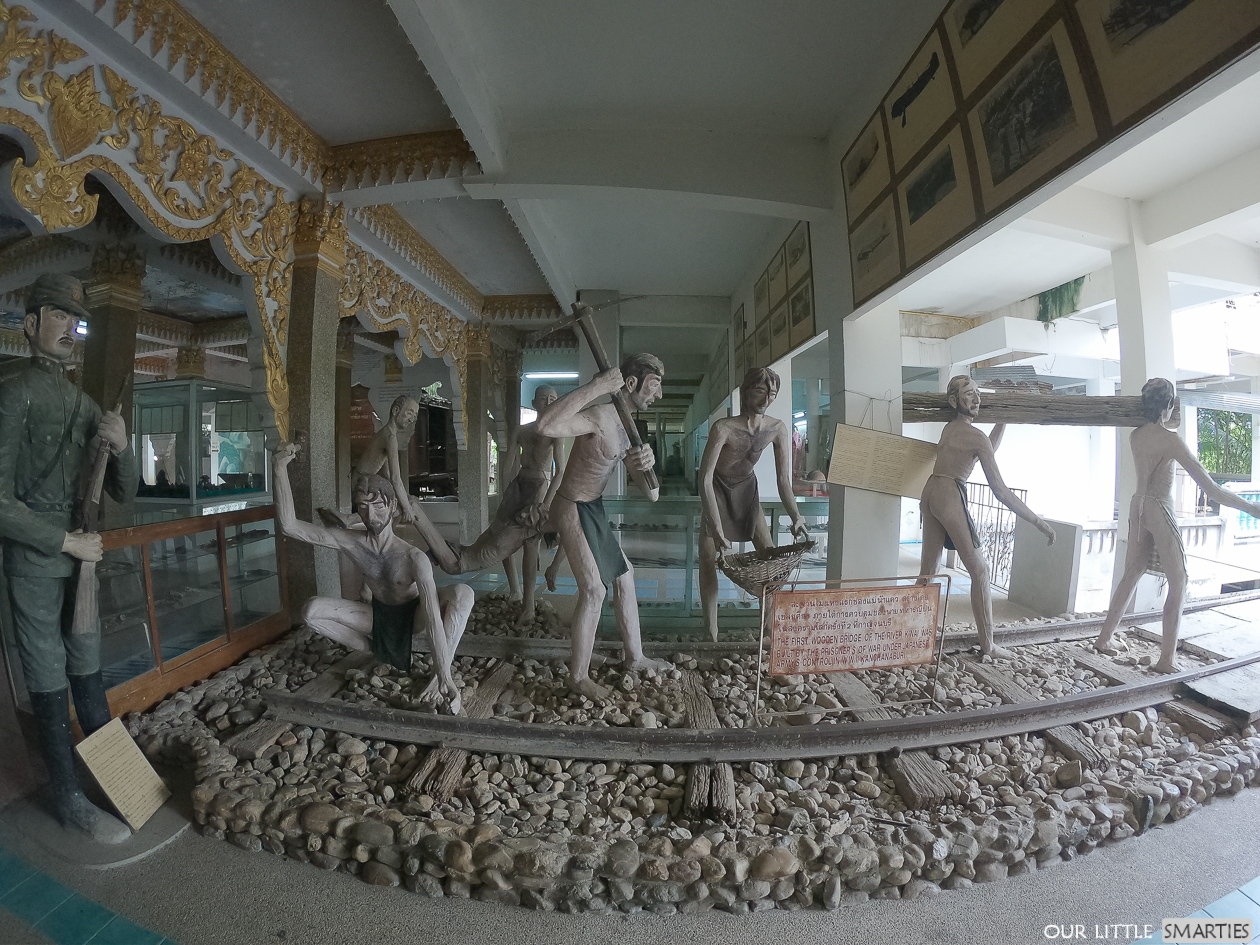 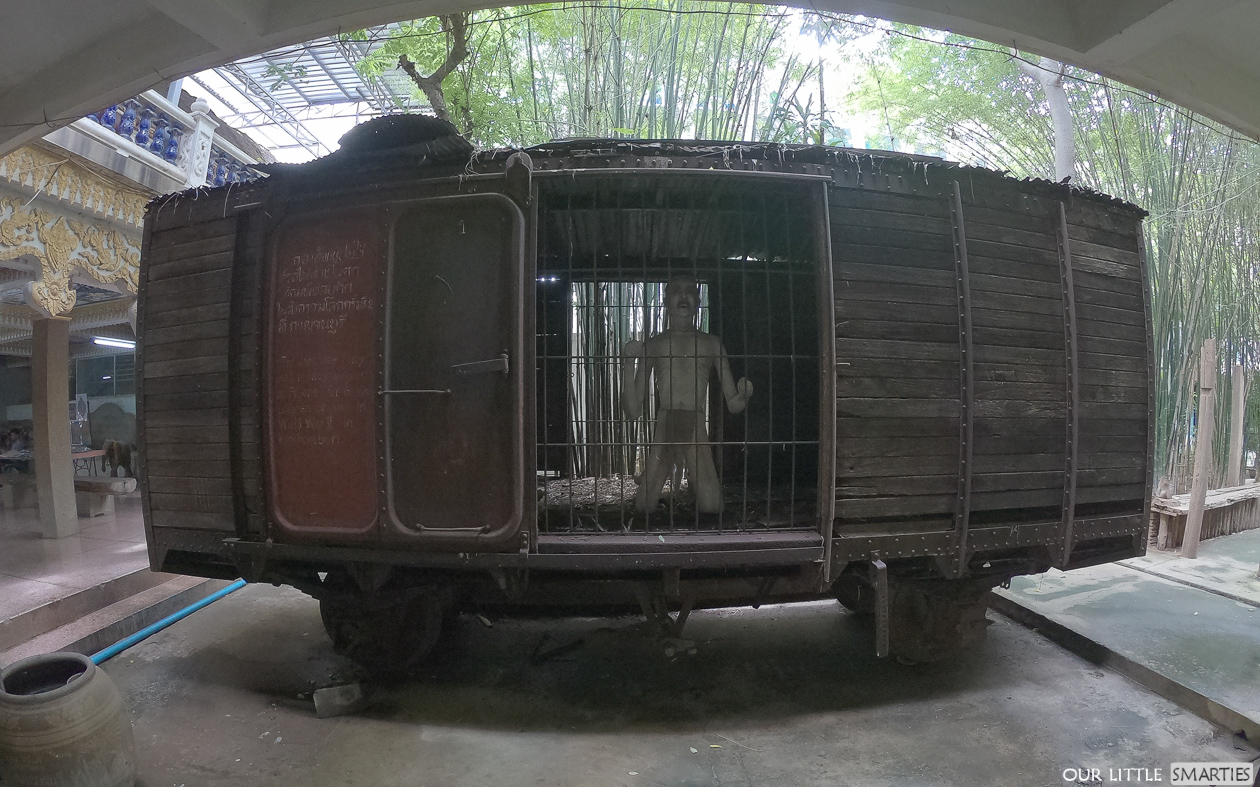 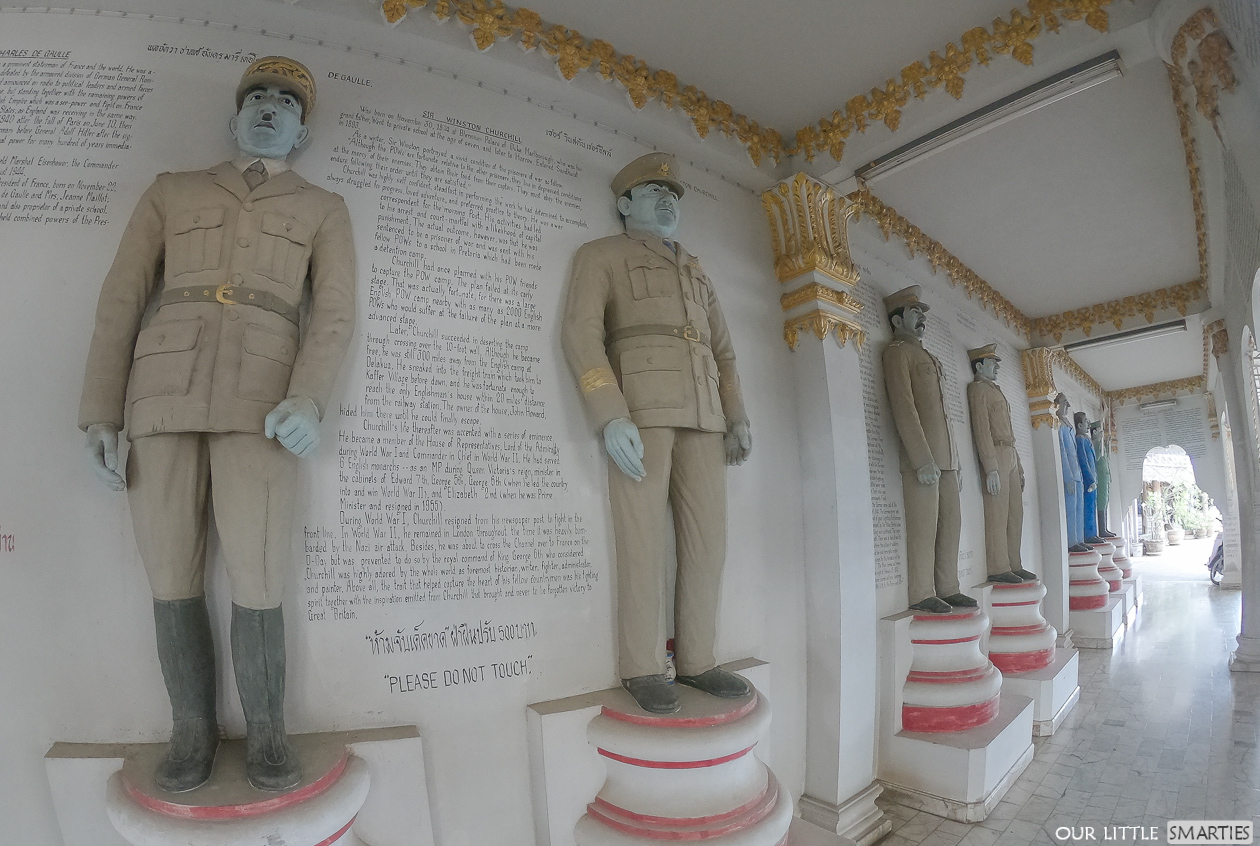 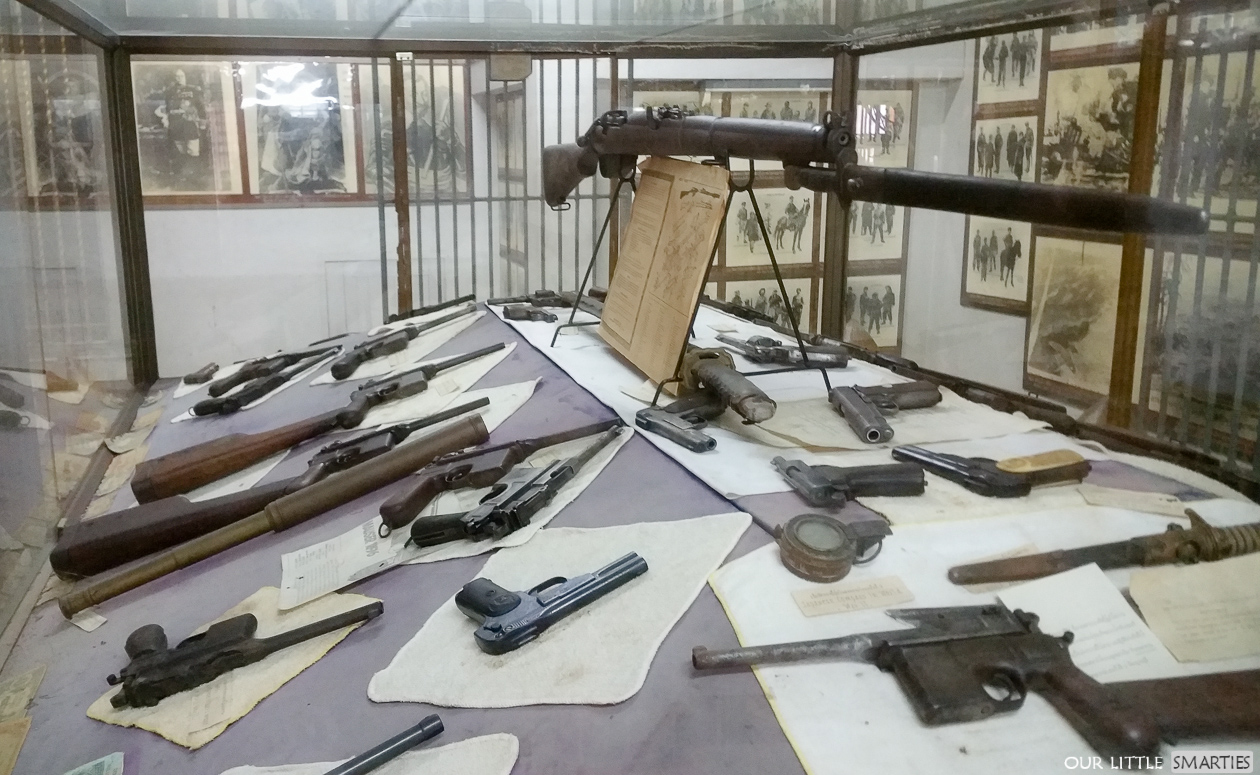 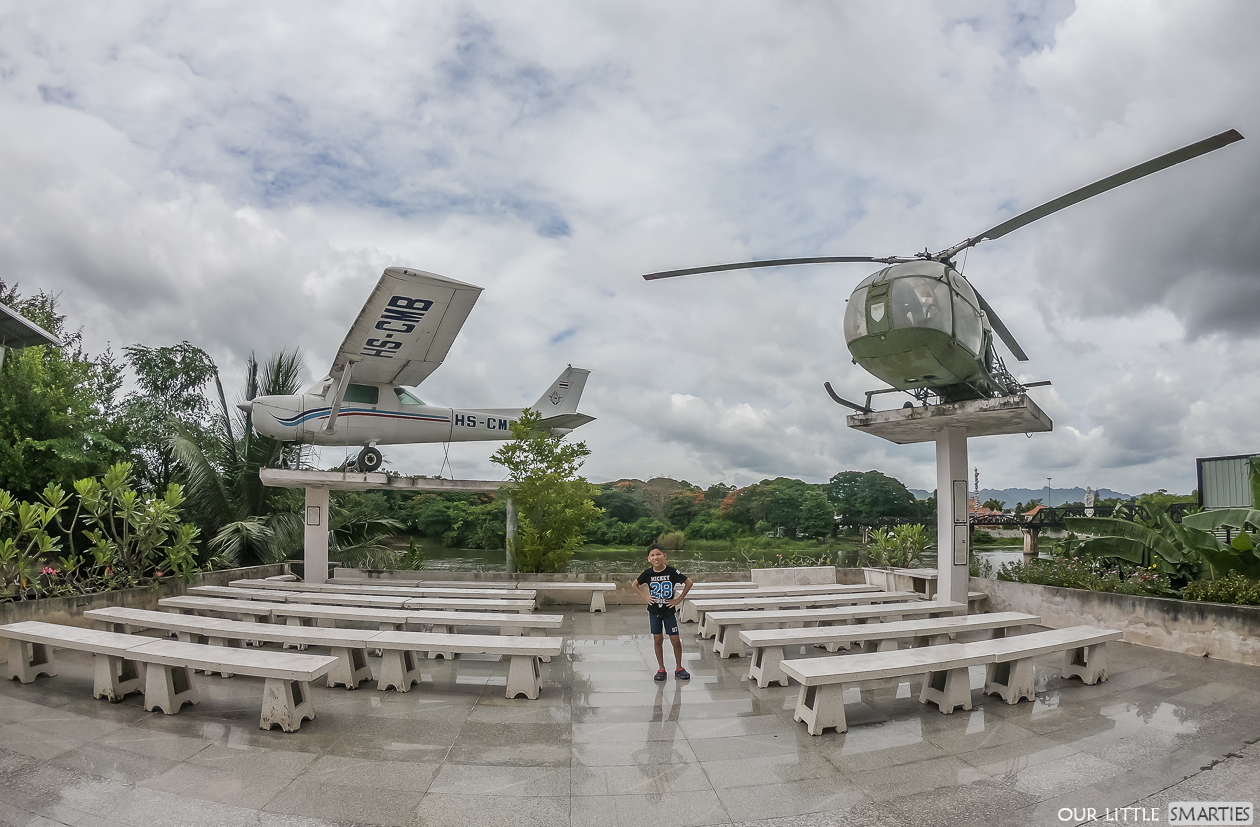 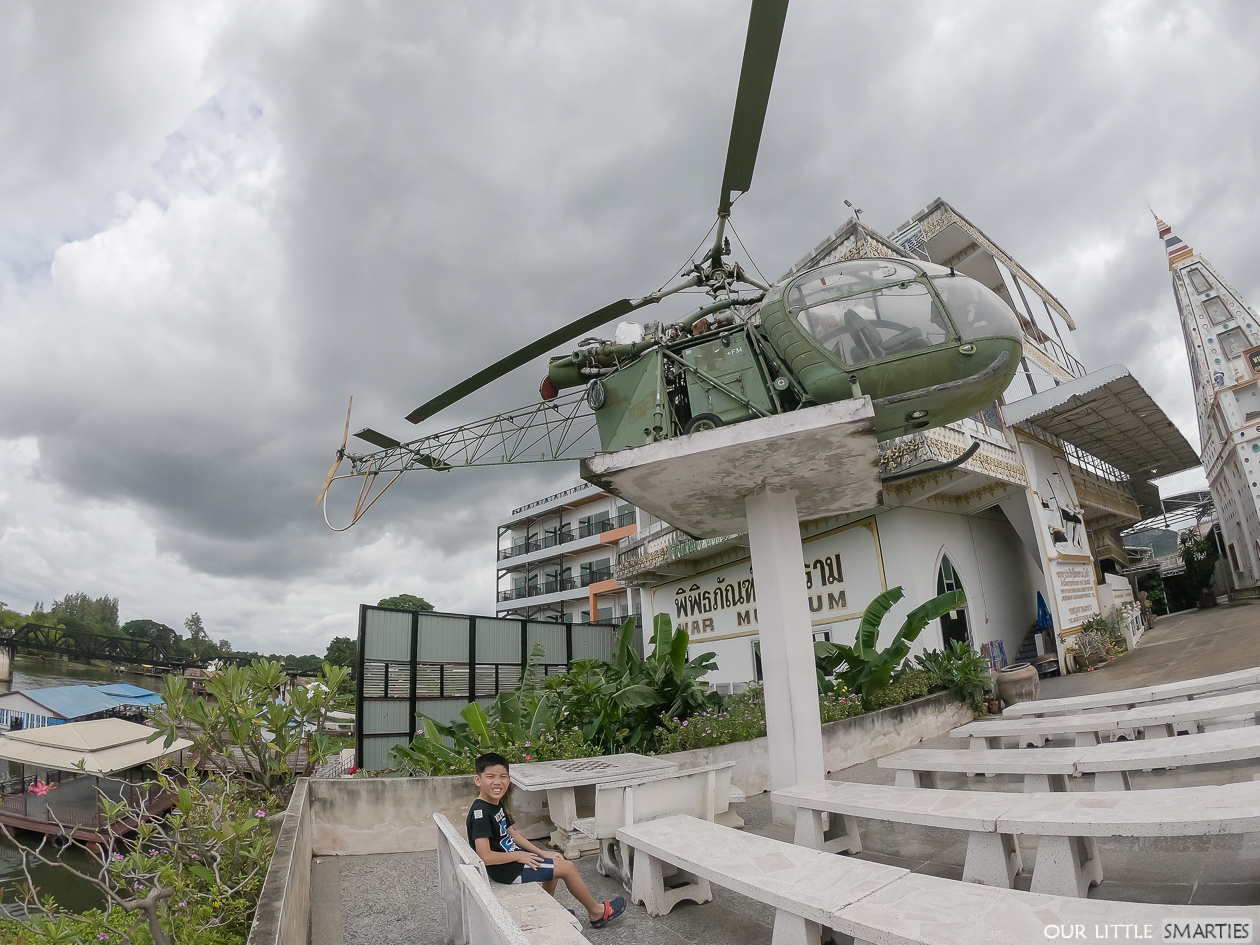 Bridge over the River Kwai

We took a step into the past and spent the day paying remembrance to the horrific history of the Death Railway. As mentioned above, the Death Railway was constructed by the blood and sweat of WWII prisoners of war and Asian slave laborers.

During WWII, the Imperial Japanese Army had taken over South East Asia and accumulated tens of thousands of skilled prisoners of war, which were later used as laborers to support their war efforts. One of the major projects that these POWs were funnelled to work for was building a railway from Thailand to Burma.

Originally called the Thailand-Burma Railway, it earned the nickname “Death Railway” because 16,000 POWs and about 100,000 slaves died during its 16-month construction between 1942 and 1943. 😢 Once completed, it stretched 250 miles from Ban Pong, Thailand to Thanbuyuzayat, Burma. Many more POWs died in the camps until 1945. 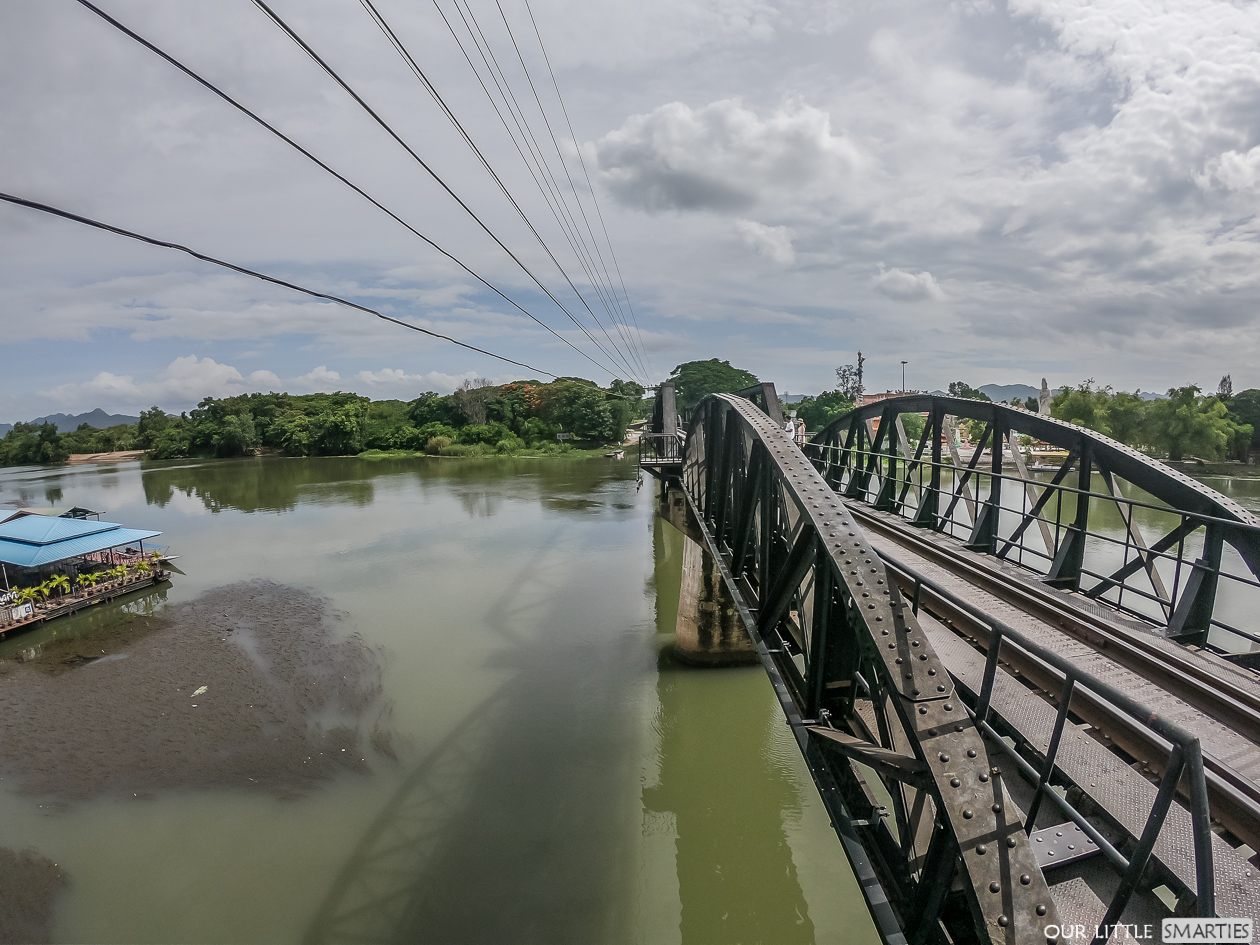 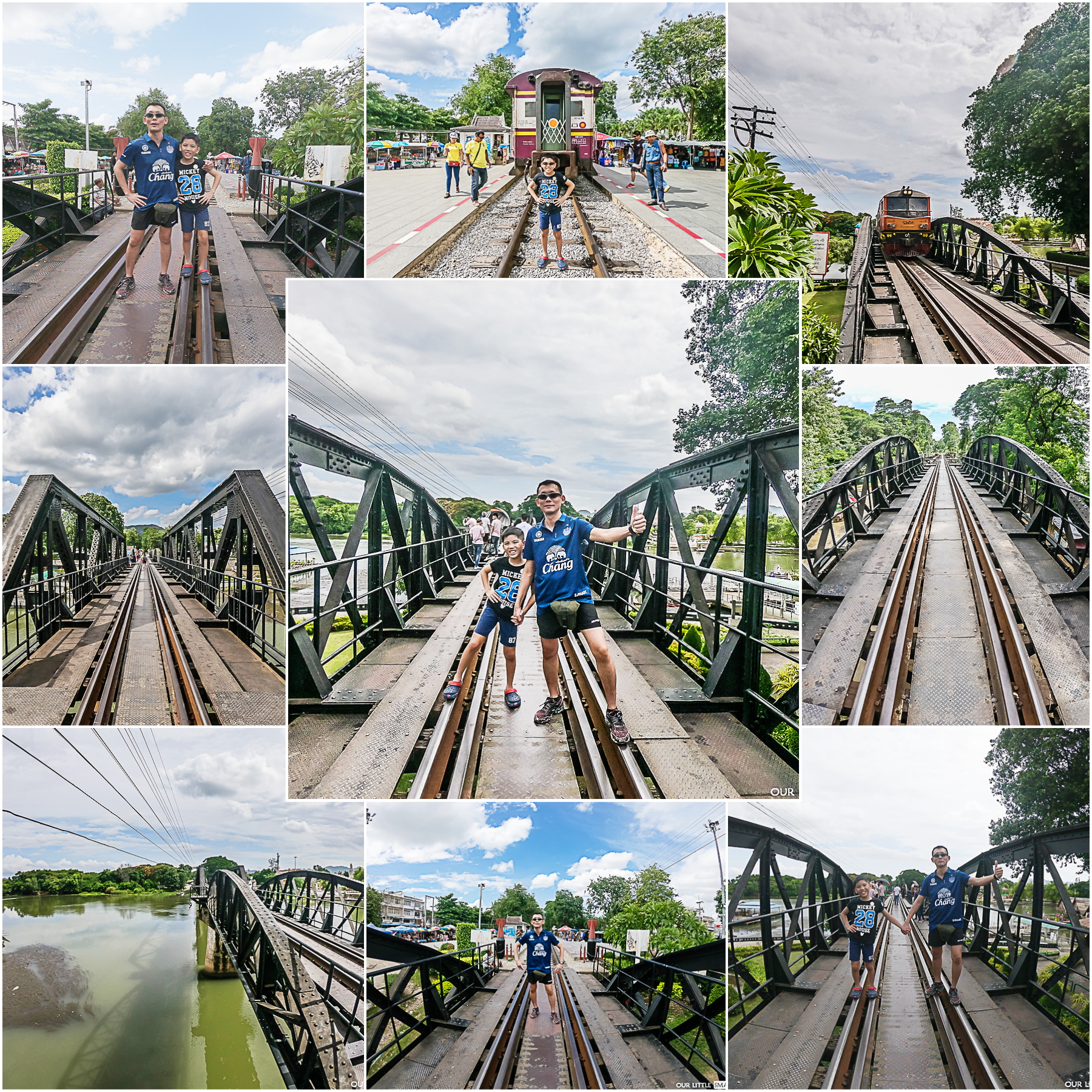 Bridge over the River Kwai, which marks the beginning of the Death Railway, is the most famous part of the railway. You can walk across the sturdy iron bridge on foot; you can also take a memorable ride along these rail tracks, sheer cuttings and wooden bridges. You’ll get to see great views as the train slows down when passing by the river and cliffs. For your own safety, just make sure not to place your head too far out from the window.

The train ride was included in our tour. It took about an hour and we alighted at Sai Yok station. I gotta be honest here. Don’t expect any luxury on the train ride – it’s very warm (there’s no air-con, only fans), the seating is uncomfortable, and it gets crowded too. Don’t ever go near the toilet. You’ve been warned ‼

The train, boarded mostly by tourists, also picked up locals along the way. It still functions as a local transportation that goes all the way to Bangkok. During the ride, there were vendors continually walking through the train carriages selling pre-packed food and fruits, drinks as well as souvenirs. 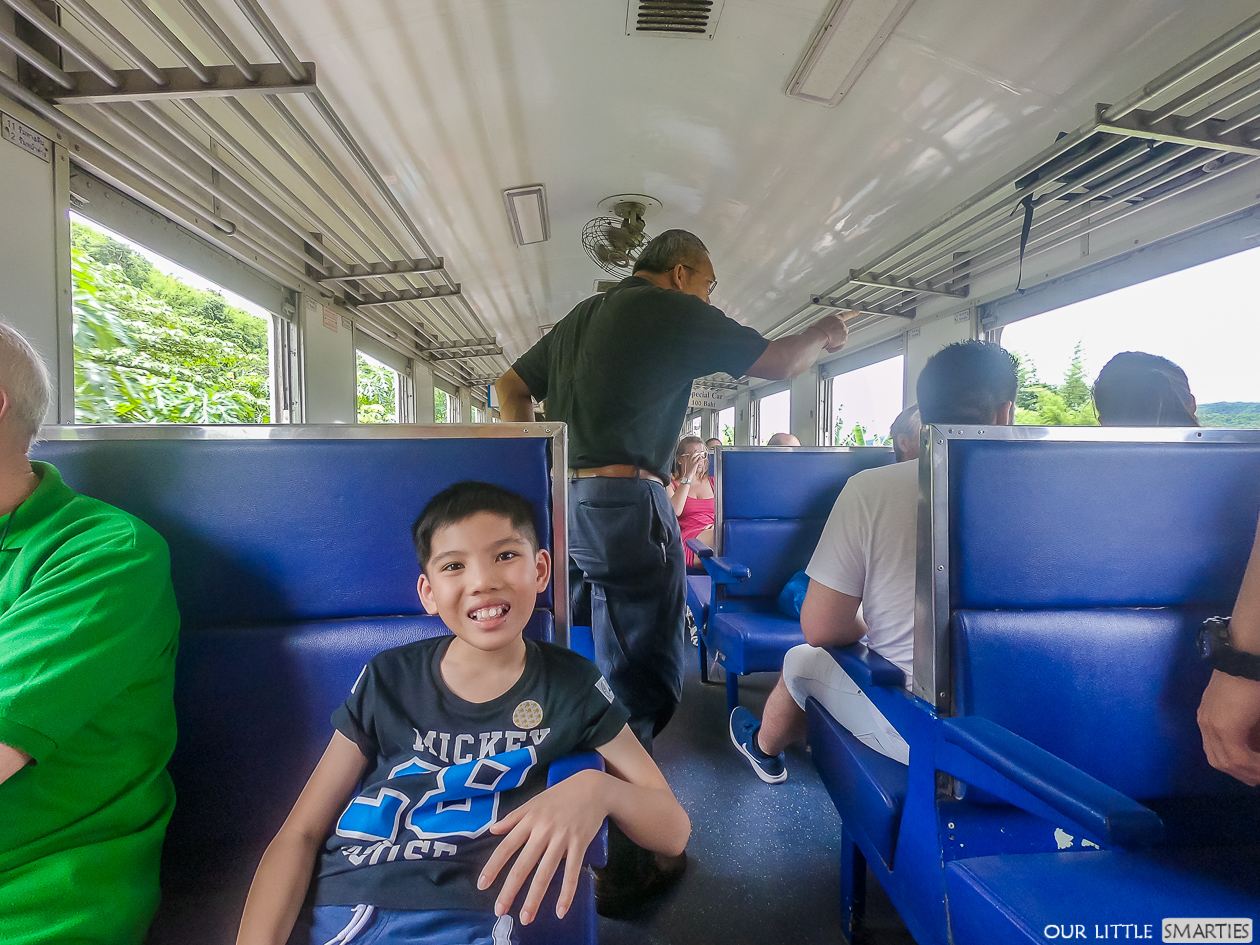 We felt SO relieved the moment we got off the train (it was too warm for comfort). Our driver picked us up and drove us to Sai Yok town for lunch at a floating restaurant. The food was ordinary, but we ate a lot because we were so hungry LOL. 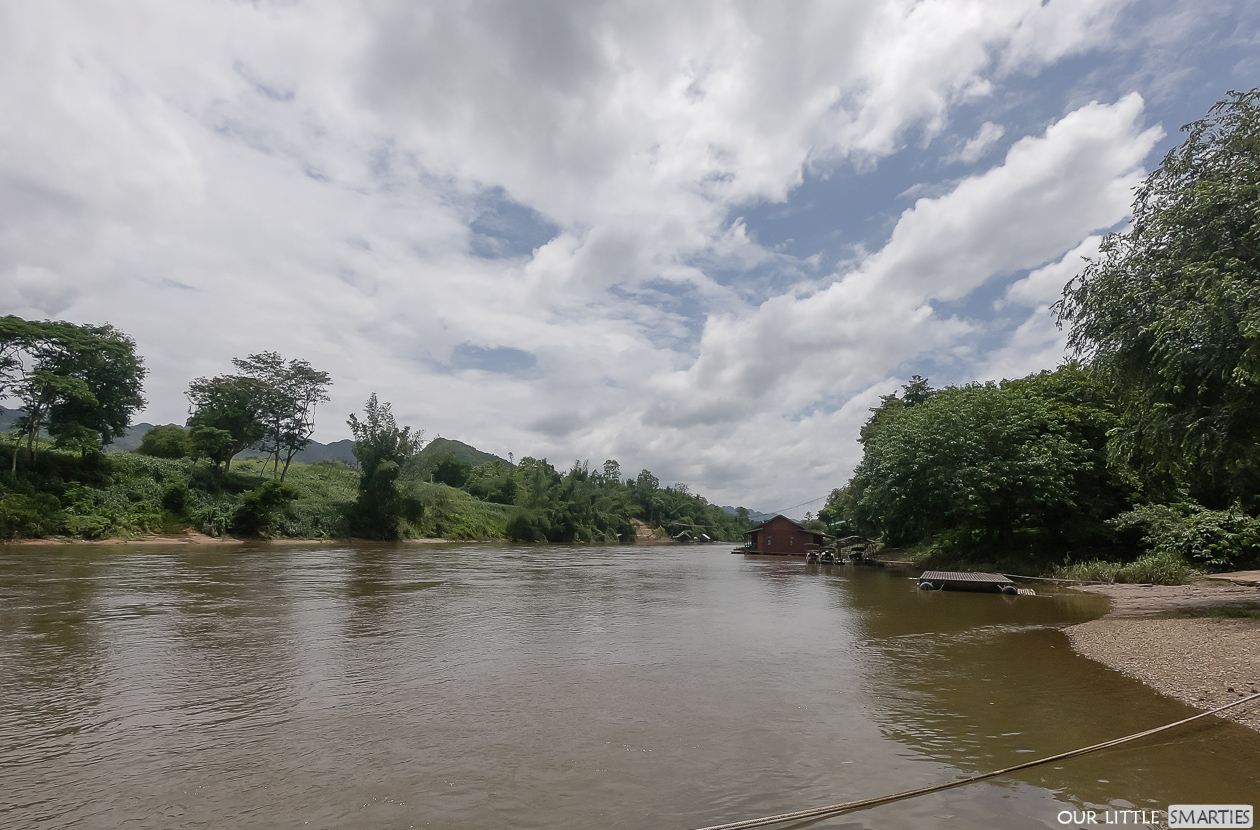 Some of you may have known that Kanchanaburi has many rivers and waterfalls. We made a pit stop at Sai Yok Noi Waterfall after lunch. “Noi” means small; this is a small waterfall close to the main road. Overall, the area doesn’t offer much. You can expect many locals having their picnic near the waterfall. After a quick walk here, we travelled back to Kanchanaburi for our last destination before returning to Bangkok. 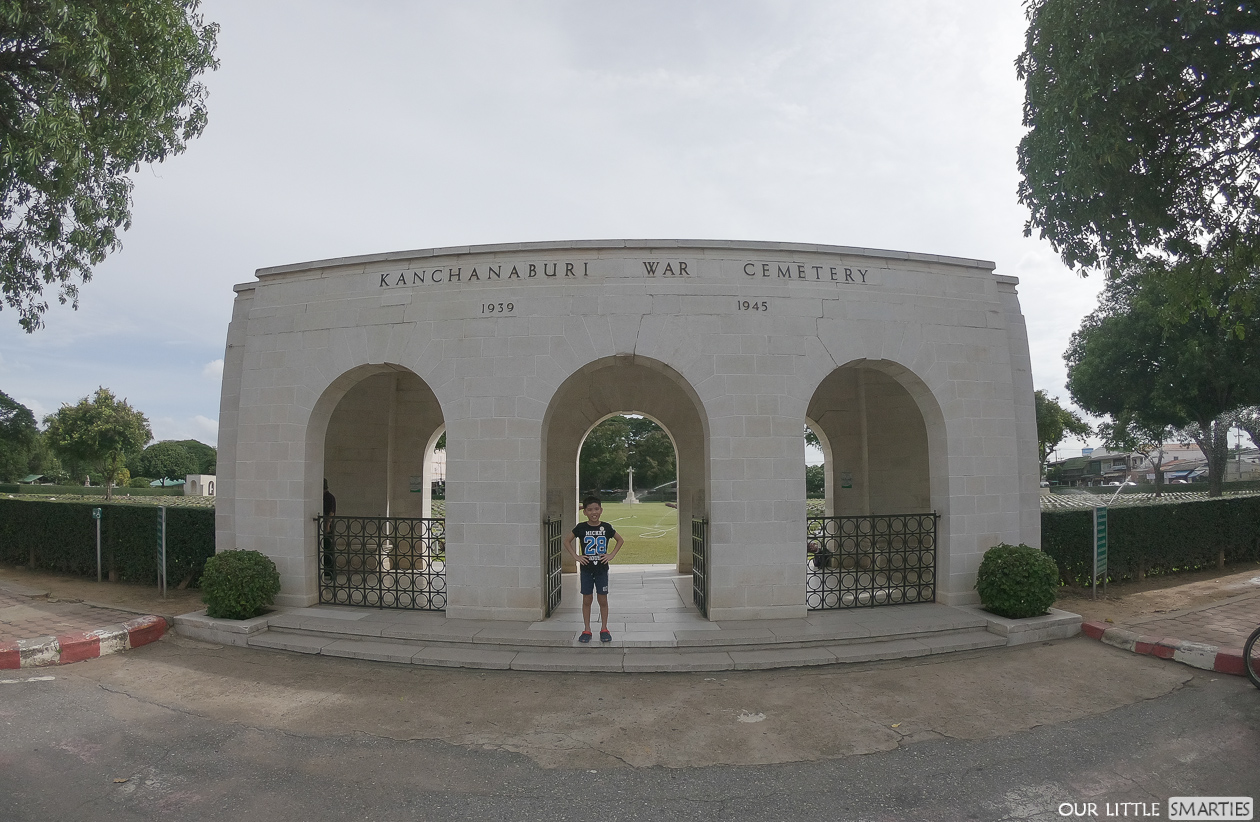 The graves of those who died during the construction of Death Railway (except for the Americans, whose remains were repatriated) were transferred from camp burial grounds and isolated sites along the railway into three cemeteries at Chungkai and Kanchanaburi in Thailand and Thanbyuzayat in Myanmar.

Immaculately maintained by the Commonwealth War Graves Commission, Kanchanaburi War Cemetery is the largest. Of the 6,858 soldiers buried here, nearly half were British; the rest came mainly from Australia and the Netherlands. As you stand at the cemetery entrance, the entire right-hand side contains British victims, the front-left area contains Australian graves, the rear left honours Dutch and unknown soldiers. 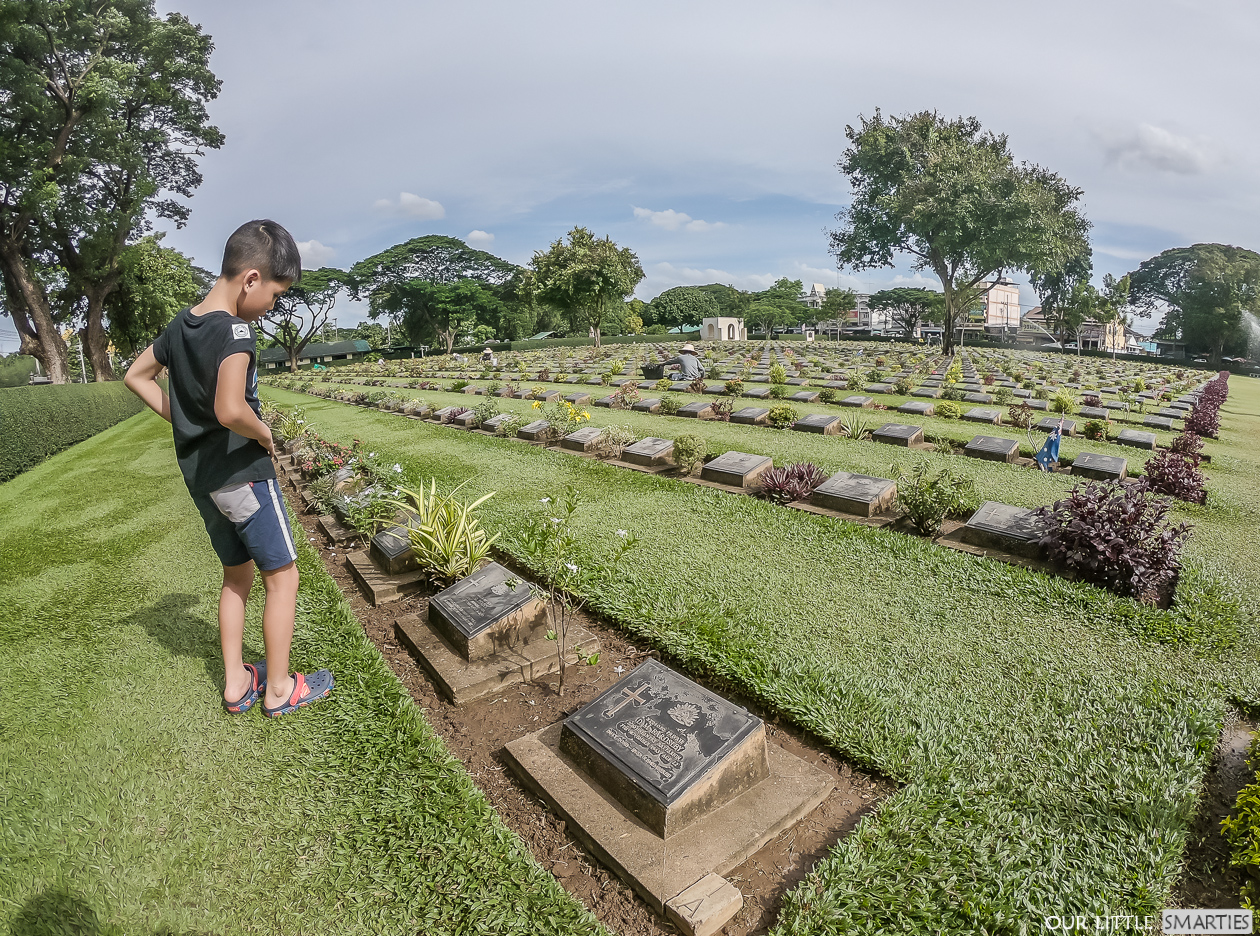 Honestly, I felt more emotional here as compared to the infamous Bridge over the River Kwai. These are the real heroes that people should be flocking to see. Even now, after SO many years, fresh flowers of remembrance and honour are still laid here. 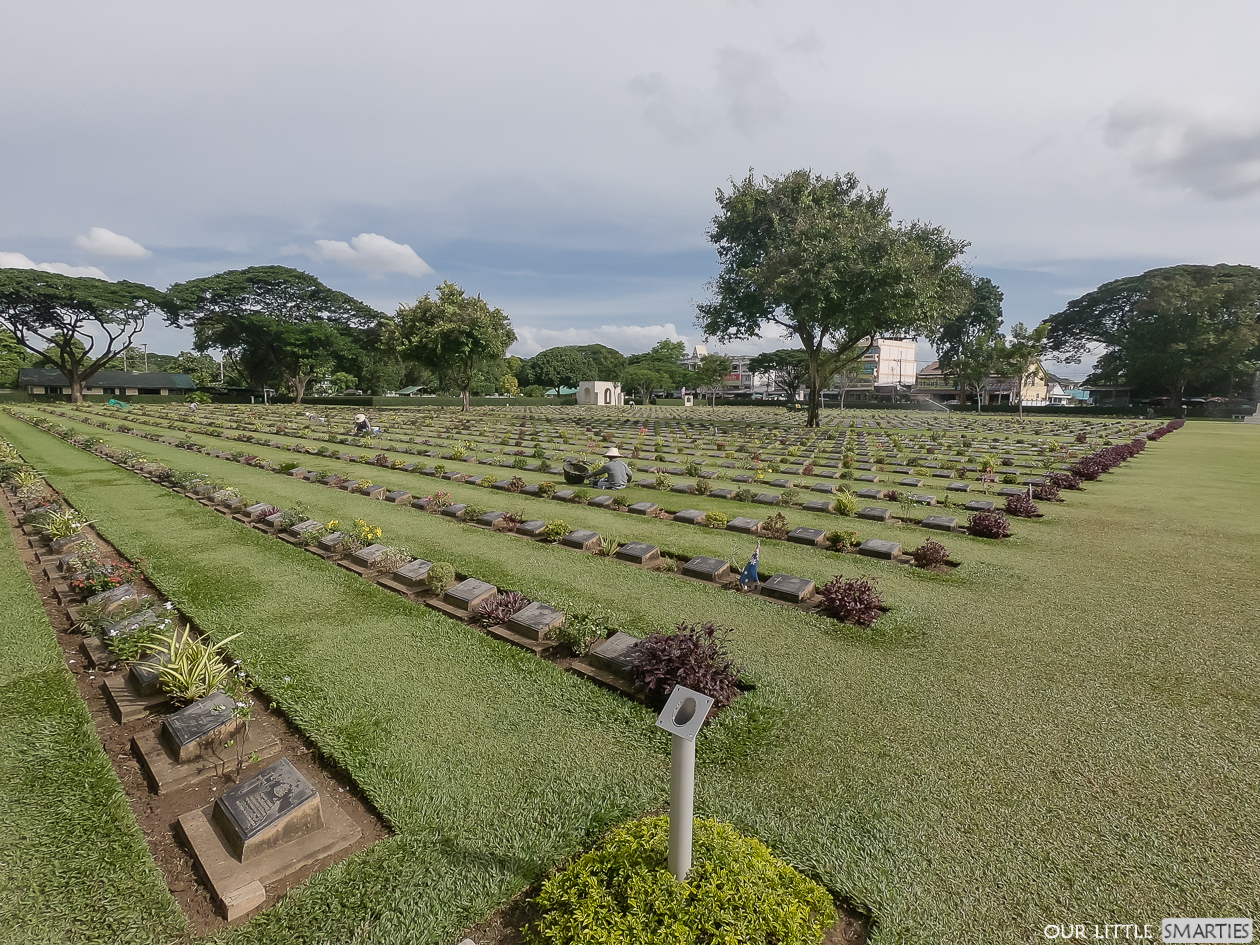 It is easy to spend 30 mins or so wandering through the graves and seeing how young some of these men were; it’s so hard to imagine them being in a battle situation. Before leaving, we took a solemn moment to reflect those who have given their lives to the construction of the railway.

After the war cemetery, we returned to Bangkok and arrived at our hotel at ~6:30pm.

The trip is inexpensive and takes about 12 hours, but it’s well worth it to witness and feel the hardships that the POWs went through during the construction of the bridge. The train ride was not as pleasant as I thought, but the sights were gorgeous and took my breath away. All in all, we enjoyed the tour especially for Edison who likes war history. 😀

Going on a day trip from Bangkok to Kanchanaburi is doable although quite rush. While there are many accommodation options, ranging from budget guest houses in Kanchanaburi town to luxurious floating hotels along the River Kwai, you can also consider staying 1 night here.

Kanchanaburi has a lot of deep and sensitive history, but even if you’re not so much into history, there are many outdoor nature activities to discover. The popular Kanchanaburi Tiger Temple, which I have yet to visit, is also a popular tourist attraction in Kanchanaburi.

If you’re keen to join a day tour from Bangkok to Kanchanaburi, these are the tours that I would recommend 👉

Have you ever visited Kanchanaburi? Do you enjoy it? Share it with me! 🤣.

Disclaimer: This post contains affiliate links. (What is this?)

It’s Back to Bangkok Again!

Hi Emily, hope you’ve been well! This post was really useful as I’m planning a Kanchanaburi day trip! 🙂 We’re going with a custom-tour option that I found on Tripadvisor.

Hi Evelyn,
So nice to see you here! I’m fine and I hope that you are doing well too. 🙂 Enjoy yr trip to Kanchanaburi. I didn’t know that there is custom-tour on Trip Advisor. Thanks for sharing with me.