Otaru is a pleasant harbour city near Sapporo that is famous for its fresh seafood, winter snow lantern festival, well-preserved canal and historical townscape. Just half an hour away from Sapporo by train, it has the perfect size to explore in a day. Thus, many tourists regard Otaru as a day trip destination from Sapporo.

We purchased the discount tickets from JR Hokkaido that includes a round-trip JR ticket from Sapporo Station, a round-trip bus ticket and a voucher for admission ticket to Otaru Aquarium. It was our first time taking a JR in Hokkaido, and it was quite fun. We finally learnt what is reserved and unreserved seat, as well as the different type of JR trains – local train, rapid train and express train.

Here are what we managed to see in Otaru in one day:

After we arrived at Otaru JR Station, we walked to the Otaru Bus Terminal (just in front of the station) to board the bus to Otaru Aquarium. There are two buses going to the aquarium (#10 and #11) – one goes around the mountains, and one goes along the coast. Both buses take ~25 mins to reach the aquarium.

Otaru Aquarium is famous for its penguin walk in winter season. The best thing is – it has 3 timings for the penguin walk. So, there is no need to rush. You’ll definitely catch one! The moment we arrived, we were greeted by the beautiful scenery of the deep blue sea lapping at the snow’s edge. The aquarium is located at the top of a hill; therefore, the view is excellent! 😍 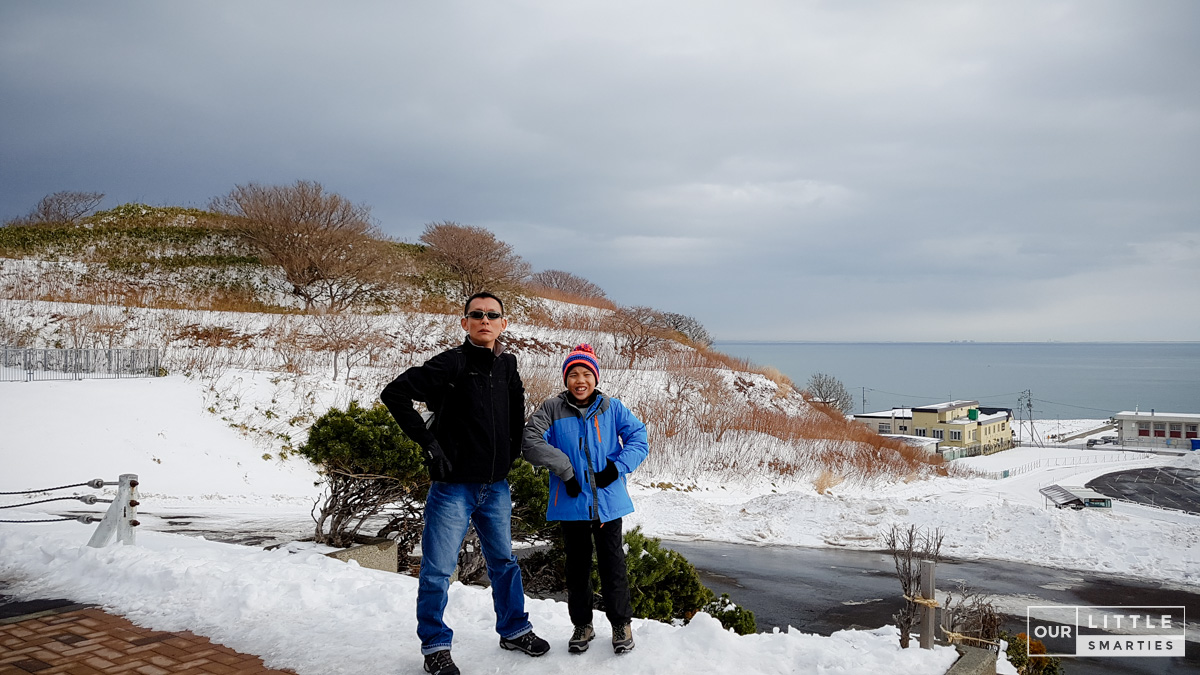 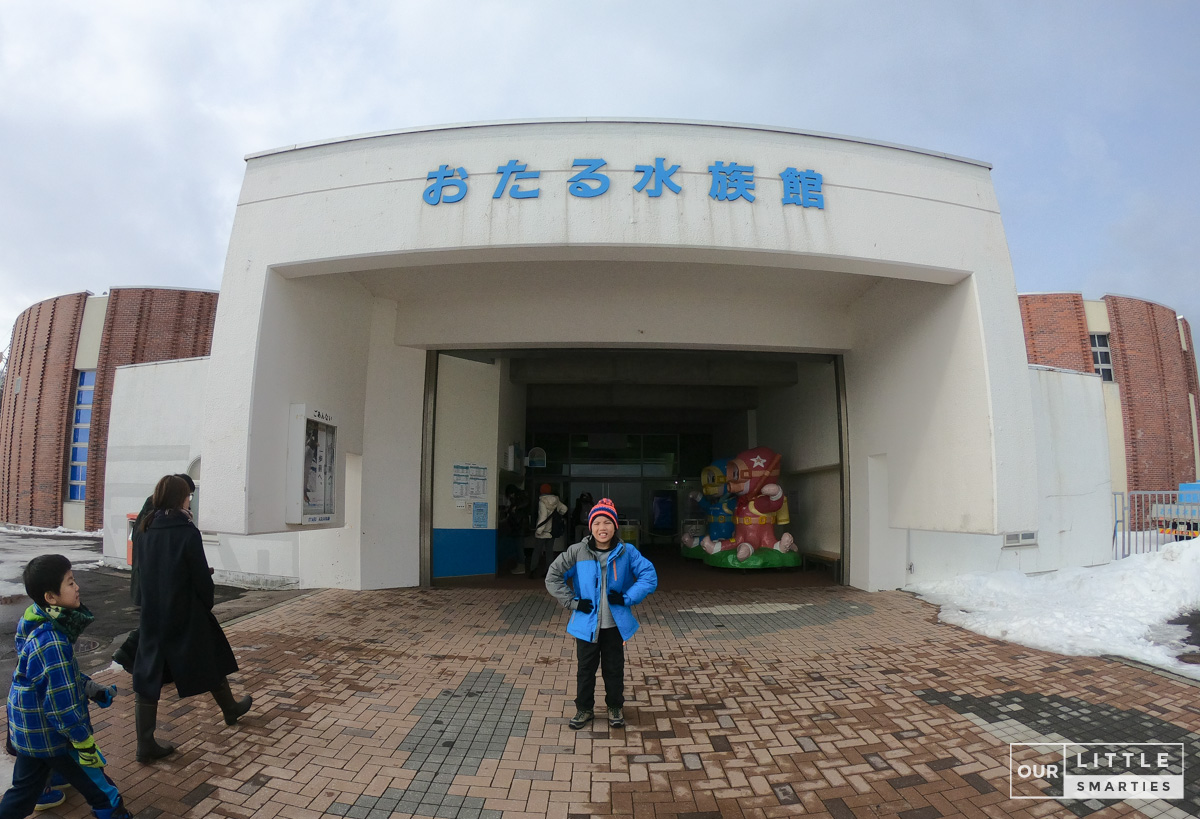 In general, the aquarium is quite small and starting to show its age. If you’ve been to S.E.A. Aquarium in Sentosa, then this aquarium will not impress you. In addition, only the name of the species is written in English, all other information is in Japanese only. The only thing that amazed me is their penguin walk. This aquarium is the nearest place from Sapporo for anyone who wishes to see the penguin walk.

The penguin walk took place on a snowy hill for about 10 mins. The penguins were so cute, some stopped and posed in front of the visitors, some couldn’t catch-up and started loitering on their own. They were led by a leader who carried a signboard that warns the visitors not to touch the penguins. They walked for two rounds along the track that is very close to the visitors. 😀 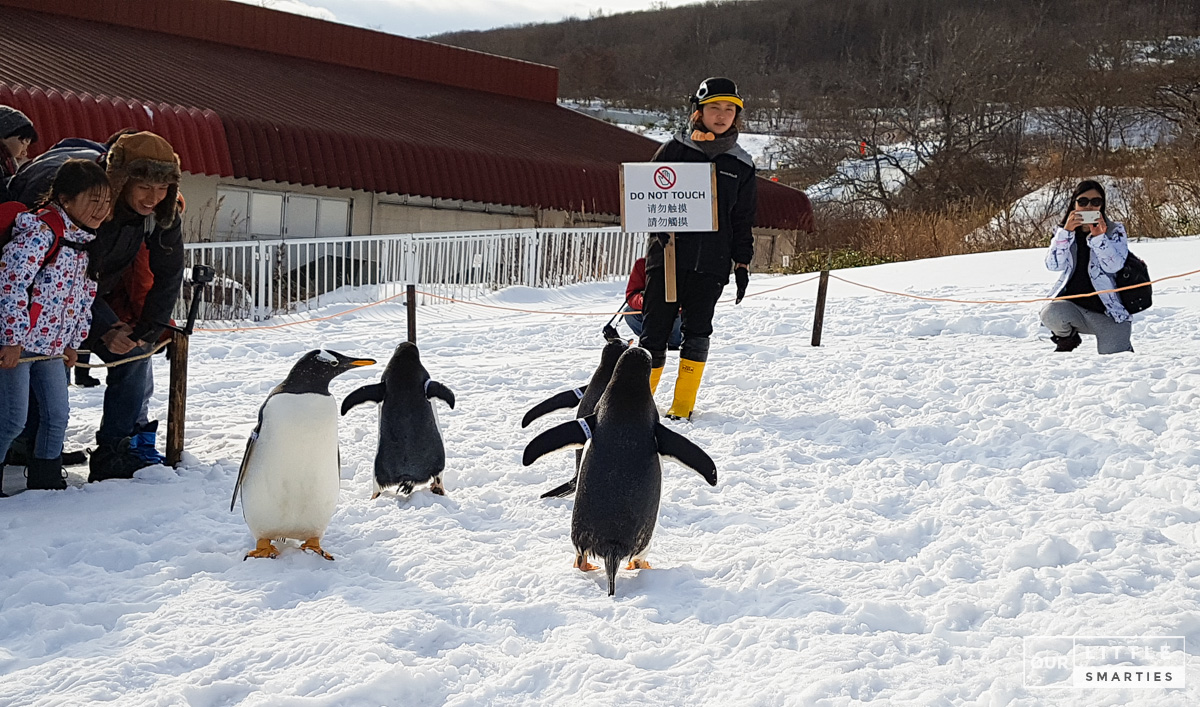 Edison enjoyed the penguin walk SO much and he was very excited to see those adorable penguins. This is definitely the highlight of our Otaru trip. Here are some videos to share the “penguin cuteness” with you LOL.

We also watched the dolphin show and pelican walk before we left the aquarium. 😀

It is said that a virgin visit to Otaru will not be complete without visiting two key attractions here which are the Otaru Canal and the Music Box Museum. After the aquarium, we took the bus back to Otaru JR Station. From the station, it’s very easy to walk to the canal. As you can see from the map below, just walk along Chuodori Street for about 15 mins to get to the canal. 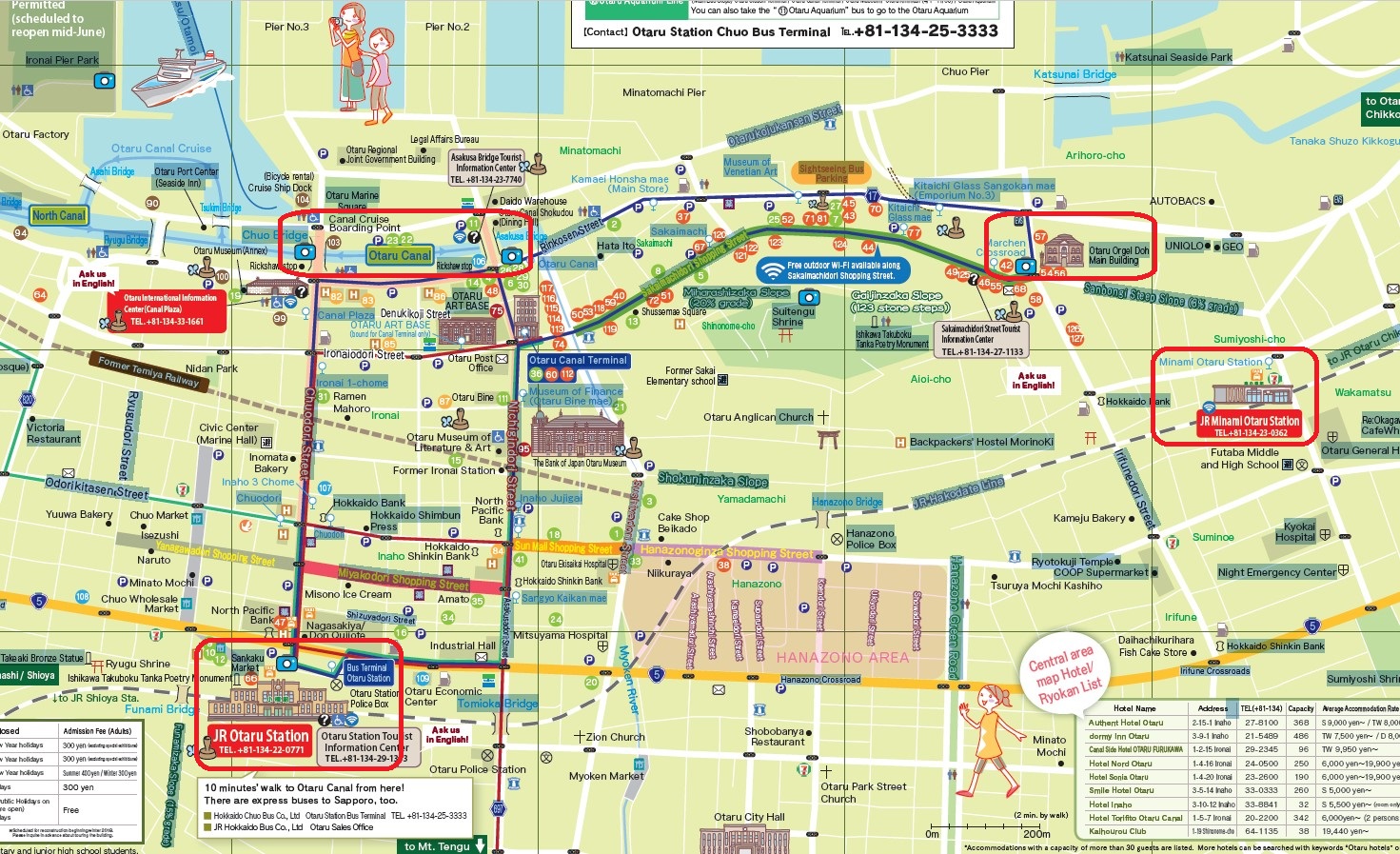 Otaru Canal used to be a busy port in the early days but it became obsolete in the late 20th century. Thanks to a citizens’ movement, a part of the canal was beautifully restored in the 1980s instead of being landfilled, while the warehouses were transformed into museums, shops and restaurants. Do you know that Otaru Canal is also the site for Snow Light Path Festival that is held every February in Otaru?

Here’s the classic view of the most iconic spot in Otaru! 😍 I can’t tell you how difficult it is to take a decent picture here due to the high volume of visitors. Can’t blame them, everyone wants a picture-perfect selfie here. We took a leisurely strong along the canal and admire its beauty, along with the historical buildings next to it. Very scenic and romantic too! 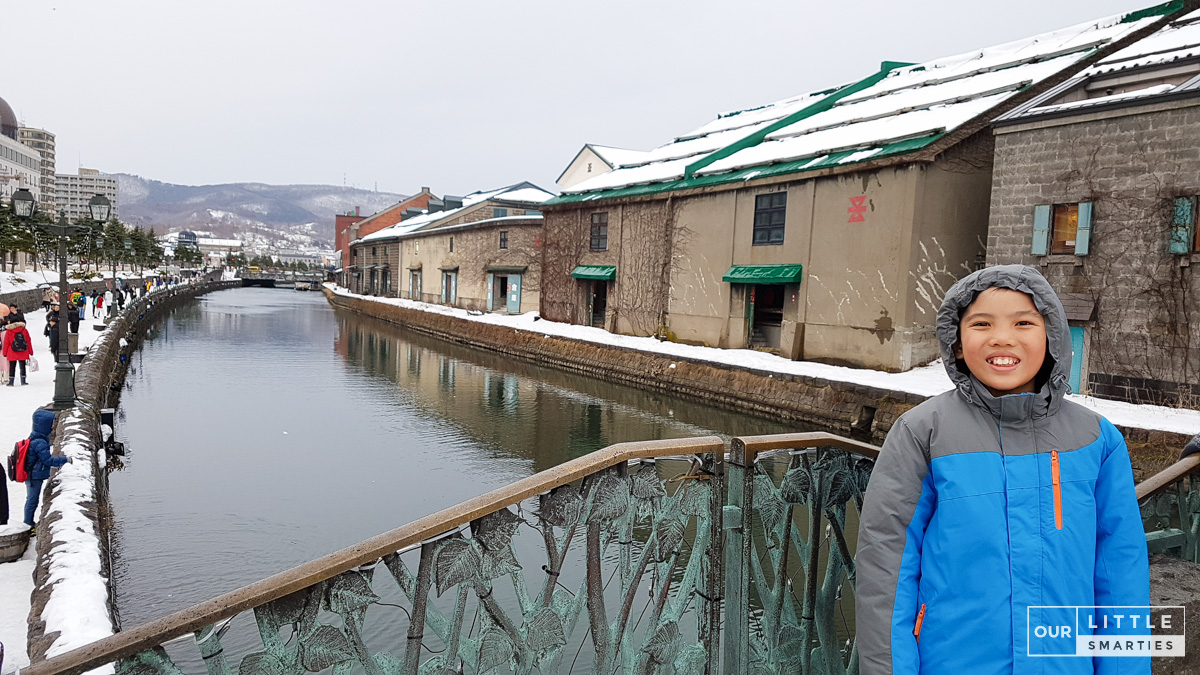 From the canal, you can walk to Sakaimachi Street nearby. There are many kaisendon (seafood rice bowl) specialty shops, cafes and gift shops here. This street used to be a prominent merchant street in the 1800s and 1900s. A lots of traders built Western style buildings as offices which have been preserved until now.

Music Box Museum is located at the end of Sakaimachi Street (about 1km, 10 mins on foot). Along the way, there are many sweets shops that represent Otaru such as LeTAO’s Café, Kitakaro and Rokkatei. It’s best to stop by and take a break.

LeTAO has several different themed boutiques here such as LeTAO PATHOS, LeTAO le chocolat, LeTAO Plus, LeTAO Sweets Specialty Shop as well as LeTAO Main Shop. As you might be aware, they are particularly famous for their Double Fromage cheesecake (also available at Sapporo). The famous pastry shops, Kitakaro and Rokkatei, are located side by side on Sakaimachi Street.

At the end of Sakaimachi Street, there’s an irregular five-forked intersection called Marchen Crossroads. Apart from the canal, this is another landmark of Otaru. There is also one of the only two steam-powered clocks in the world (this one was gifted by Vancouver).

Here, you’ll find the Music Box Museum. This is one of the most famous building in Otaru. In this building, there is a HUGE shop selling all sorts of music boxes. You’ll find the old fashioned gilded ones to the modern cutesy ones, and from wood-based to glass ones. The sight of several hundreds of glass music boxes stacked on each other sent chills to my spine. I had to repeatedly remind Edison not to touch any of them – especially those made of glass.

There are still many places we didn’t get to explore such as the Sankaku Fish Market (just left of the Otaru JR Station), Mount Tengu and the Glass Museum. We also didn’t manage to try out the famed Naruto’s Hanshinage Fried Chicken (which I wanted very much) due to lack of time. Hopefully, if we get to visit Otaru again, we can finish up what we’ve left in this trip.

Our Past Travels: Let’s Take A Trip Down the Memory Lane

What to Wear for Winter in Japan: Guide for First Timers

Hi, may i know what pass did you purchase to go Otaru? I am leaving from Sapporo Subway.

Thank you for sharing your experiences touring in Otaru. It is very useful! I’d like to find out from you where you purchased the JR Otaru discount ticket. And must it be bought on the day of travelling to otaru? I tried to find information from the JR website but it was rather unclear. Thanks a lot!

Hi Ling Ling,
I bought the JR Otaru discount ticket from Sapporo JR information desk. They have various discount tickets. You can purchase it before your trip (don’t have to be the exact travel date).

This is the link where you can find all the discount tickets: http://www2.jrhokkaido.co.jp/global/english/ticket/otoku/index.html

This is the link to JR Otaru discount ticket: http://www2.jrhokkaido.co.jp/global/pdf/e-direction05_201910.pdf

Thank you so much for the swift reply, Emily! Glad that it sounds convenient.

Hi Ling Ling,
You’re welcome. If you’re unsure of how to use the ticket, you can approach the staff at the Sapporo JR Information Desk. They have English-speaking staffs who are extremely helpful.

Hi may I know how much fee entrance of Otaru Aquarium?

Hi Jayanto,
The admission fee is:

Dear Emily,
Thanks for your info, I’ll plan to visit otaru next month and I think otaru aquarium nice to visit bcos wanna see penguin parade. 🙂

Hi Emily,
How many minutes totally for penguin parade and what time the parade started?

Hi Jayanto,
Pls check their website for the timings, I can’t remember. Sorry about that. There are two sessions and each last for about 15 mins.